Hey there
I have a Java file. Actually it's tlauncher Java file. But it can't be executed. I mean there is nothing happening when I'm executing the file. I have Java 8, 11 and 17. My default Java is 11 and using Java 11 I had installed TLauncher in my previous Zorin 15.3 lite. I have two DE. Tried in both of them. And yeah I have executed the file in terminal but no response except this 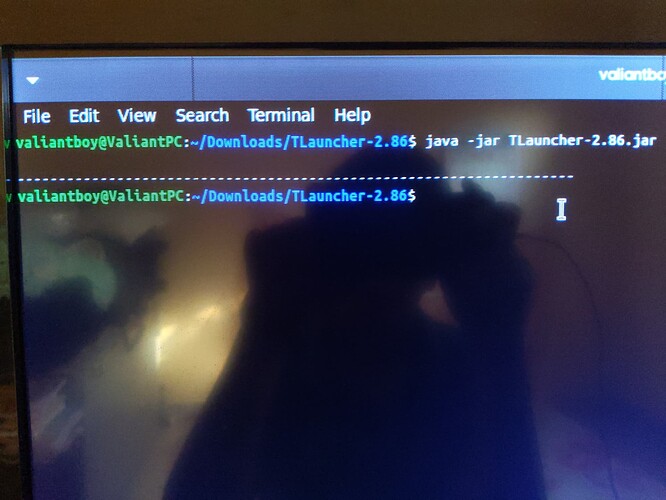 Have you purchased and installed Minecraft at any time?

Nope😅
Altho I have installed Minecraft and ATlauncher. But I have to then purchase Minecraft. The only way to play it for free is Tlauncher in Linux. There many ways in windows but not in Linux

The only way to play it for free is Tlauncher in Linux.

Tlauncher still requires a purchased copy of Minecraft, as to do otherwise would be an act of Piracy.

You can run Minecraft on Linux using Bottles or you can examine Minetest which is fully free... but not fully minecraft, either.

Tlauncher still requires a purchased copy of Minecraft, as to do otherwise would be an act of Piracy.

Ahhh. Actually easiest way to play Minecraft for free is Tlauncher. That doesn't require a purchased copy. I have played Minecraft in Tlauncher before in windows and it didn't even requested me to login! Just download and install the Tlauncher and start playing

You can run Minecraft on Linux using Bottles or you can examine Minetest which is fully free... but not fully minecraft, either.

Ok, let's see. But the problem is Wine or Bottle doesn't work for me. They just can't run on my PC!

TLauncher is official and is legal. TLauncher is not illegal provided that you have purchased Minecraft: Java Edition on Mojang's website. If you are using TLauncher to play Minecraft for free, you are committing piracy, which is illegal in most...

It seems better to avoid the problem...

It seems better to avoid the problem...

Okay. I really don't care about my data. Hackers would just find so stupid stuffs

. But I'm a Indian and here parents don't believe to pay for something that is just an invisible product. I mean if they are buying something, they should get something useful or a physical product. Games are considered useless and time wasting thing in India. And pirated games and software are really common in India. I know it's not good to use a paid product for free cause it's illegal and it takes a lot of time for developing this types of quality games and software! But come'on, Microsoft or mojang can take down Tlauncher. But they aren't. Because they know that one day person like me would buy their game. And if I have to play on Big Server like Hypixel I would just have to buy the game. But am a normal student, who can't just afford a game 🥲. So please help me in running this game. This is the only game which love to play.

Sorry, we won't help with pirated stuff on these forums.

But I'll suggest you install Steam, they have plenty of free games for those who haven't any money.

create an account and login. You'll find a category for free games.

@Kedric please respect the rules. What you do on your computer is your own headache, but here on these forums we don't help people with pirated/cracked/illegal content(s).

@ValiantBoy due to the forum rules, I would suggest u to visit the TLauncher Reddit. Thank you

. No problem, rules are rules and they should be followed!

here parents don't believe to pay for something that is just an invisible product. I mean if they are buying something, they should get something useful or a physical product.

I am the same way.

When my son was young, he would often see things he wanted in a store and ask. Occasionally I would say "yes" but usually it was a "no."
Whenever the "no" he would look sad and disappointed.
There came a day when he noticed that my shoes were falling apart and teased me for the hole in my shoe. I said, "Yes, because I keep telling myself 'no' so that I can at least sometimes tell you 'yes' when you want something."
He is 19 now, and he still remembers that and the remarkable effect that had.
It helped him understand, money can be hard to come by. That parents stress about it. That we don't say "no" to be mean.
Now that he is old enough and has to work and get a meager paycheck that you feel disappointed in, he knows how often he must tell himself "no."
Many people live from paycheck to paycheck and are only one paycheck away from being homeless.

It comes down to knowing what to value.

When enough people justify taking from someone else, doing the wrong thing, then everyone gets hurt by it.

My son was a kid back when the economy was in good shape and I was making a lot less money. Now, today, there are shortages everywhere and the prices of everything have climbed very, very high.
Piracy is an act that often causes companies to raise their prices in order to cover their losses.

Your parents are not mean. They have learned, possibly the hard way, what is required of something for it to truly be valued.

Thank you so much sir

. You have explained me a big lesson of my life. I would definately follow the things you have told me. Now when I would be able to actually buy the particular game, then after only i would use that. Once again thank you so much sir