To me looks goldish. I have to say, I personally wouldn't think this color would work, but it looks darn good.

I agree. This steps outside of my usual in that regard (I dislike the color yellow). But that was part of the motive. If I can make myself like Yellow, I figured I may be doing ok.
I could tolerate this theme for a week, at least. With regular use, anyway.

I don't like yellow either. But I admit, yellow is a color on our planet. But if you see yellow with black stripes coming for you, I suggest running.

Its amazing how quickly wasps and hornets can turn against you, one minute your fine, next minute your face is swelling up.

But I admit, yellow is a color on our planet

This... this is true, yes. I appreciate your honesty.

Its amazing how quickly wasps and hornets can turn against you, one minute your fine, next minute your face is swelling up.

I do not have this problem. Wasps, hornets, yellowjackets... Around here they are very docile. I can (and do) walk right up and put my hand on the nest. They will crawl around on my hand.
And bees.
I LOVE BEES.
I can sit and hang out with bees all day long.

Something that I neglected to say with my honesty, is that I agree with Jeff. Even though I hate the color yellow. I must admit, your theme does look good, and I do like the rounded bubbly buttons.

It just goes to show, no matter what style you do Aravisian, you always make beautiful themes. Its just that, some themes are not for everybody. Which is why your making so many I think. You know this already, its a fact.

For example, I was a fan of the Azenis theme for the longest time till I saw Predator. And now, I am like, holy mole guacamole, that is one spicy hot delicious bit of theme right there. I will just have to add that to my system.

Ohhhhhh, which reminds me, I am going to have to add the Predator theme and Prawler icons at some point. I just haven't been in the mood to take a giant leap into theming yet. I kind of had the wind kicked out of me so to speak.

Around here they a very aggressive. And we got those African/Japanese whatever you wanna call them from their origin, killer hornets, also known as Murder Hornets I guess. Oh my gosh, they are so dangerious and so species devestating to the environment, that our own government has been on the war path against them.

Last I heard last summer, they found new nests and were burning them down.

Gotta say,
this one was hard to combine. Guess you picked the right color. Looking for the right gnome-shell was not done, just used predator. Found some icons on gnome-look; Carboniferous-Gold. 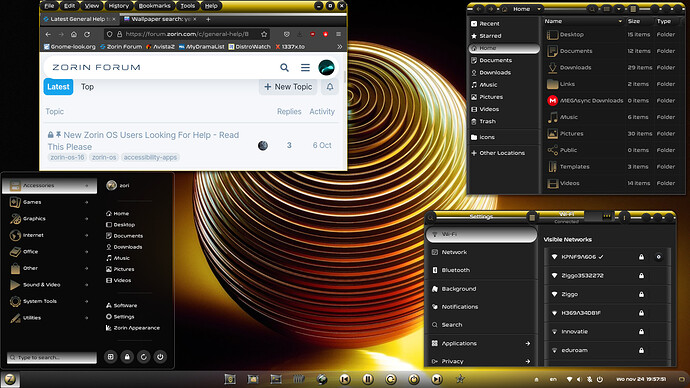 Found some icons on gnome-look; Carboniferous-Gold.

Thanks for the tip.
I'll see about switching that out.

I must stress the Icons are Suru++ Asprómauros (https://store.kde.org/p/1247483/) by (https://www.opendesktop.org/u/gusreis1989/)They have been recoloured in oomox to match my Carboniferous-Gold...

Sweet! I'm foaming at the mouth wanting this....

Don't want be to optimistic about Zorin, Gnome that is, but when you have a good an smooth running OS for me, what's left is theming hoping it won't freeze of course).
And that's what I'm doing. Happy to have Aravisian giving me some homework.

Love your hobby by the way. Would like to join chasing those fairies in that garden of yours. Nice one. Is it a big garden

Well, not much sweat there, all credits go to the guys like Aravisian and other creators, I just themed it.

It also just got an update... because I apparently forgot to theme in the Nautilus Tabs... See what happens when I do not use Nautilus?

In about thirty minutes after I make this post, it should have worked its way through lintian to your door...
Just sudo apt update && sudo apt upgrade to get it...

Really, so you're not satisfied. I know what you mean. Guess you worked too often theming them, to see the difference.

But if you start here , you will have to check the other File managers too and it doesn't stop there. If you recon it could also happen while using a different DE, like Cinnamon. Don't know if this one's available for Cinnamon though.

Theming is a hard and time consuming part of development but then u have to test it. Guess you can't have a 100% match, there is to much involved.

like Cinnamon. Don't know if this one's available for Cinnamon though.

It is and it doesn't do that in Cinnamon, either.

Guess you worked too often theming them, to see the difference.

No... they just are not meant to be used on Gnome.
But... When a member does- that can happen. I might be able to fix it... I am not sure.
Part of the problem is that gtk css does not fully use css3. In css3, you can have the after: transformation. You can set max height and max width. gtk.css lacks those... You can set a Min Width but not the Max width. It is quite frustrating.

but then u have to test it. Guess you can't have a 100% match, there is to much involved.

Exactly and whenever I try to get testers, no one really wants to.

On top of that...
No User EVER reports issues back to me. Every single thing you ever see in one of my themes that gets fixed is because I go back in to each, testing, checking... Over and over again long after release.
That one thing really galls me. No one ever reports bugs.

No User EVER reports issues back to me.

Yea you sitting around wonder did I help? Did it not work? Is it working and they just don't care to answer cause they got what they wanted?

See it all the time here, but put the shoe on the other foot and they rage because know one answers.

Sorry for my rant.

To tell the truth, when I was looking for a matching gnome-shell and icon theme, I stalled some of them.

And sometimes they don't give what they supposed to, meaning; seeing the print screen on gnome-look dot org and comparing to what I got when installing, they don't deliver the right outcome, somehow there are frictions.

This all meaning that it doesn't have to be your creation that's causing this but perhaps "gnome" doesn't always allow the applications theme and shell theme to work properly in combination. So I would give you the wrong advise or feedback.

And when installing those gnome shells even my fans started blowing higher, had to restart or shut down my PC to calm it down.

And when installing those gnome shells even my fans started blowing higher, had to restart or shut down my PC to calm it down.

Themes do not really cost any power... All GUI is themed in one way or another.
I am not sure what caused that. perhaps the download and web communication...

And sometimes they don't give what they supposed to, meaning; seeing the print screen on gnome-look dot org and comparing to what I got when installing, they don't deliver the right outcome, somehow there are frictions.

Oftentimes, the theme file is updated or changed, but the original printscreen image does not get updated to reflect it.