hi I am new to Zorin OS and I love the pro version. One thing I couldn't figure out so far is how to align two monitors correctly in the settings. I have two monitor set up with primary monitor landscape and secondary monitor vertical on the right, which is common along developers. I know I can drag the display relative position in the settings to mimic the physical setup but after that looks like all the icons in the primary display starts to shift down in the home screen and can't be put back into their original place... please help, thanks 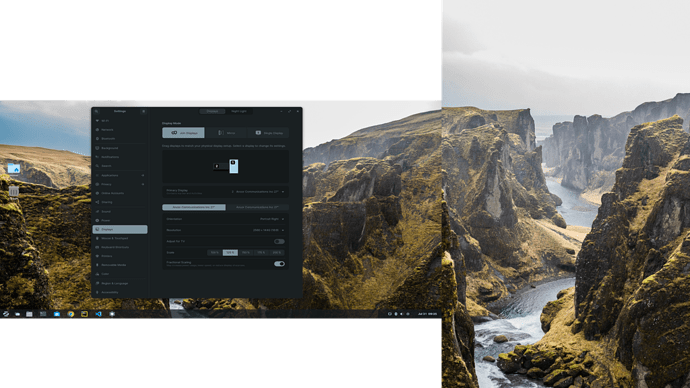 This is a Gnome Shell issue and I am not well versed in Gnome.
So in this, I am even more novice than I usually am.
But some things you can check:

Gnome has removed desktop icon support entirely. This is somewhat common in Microsoft, Mac and Gnome, that if they have any trouble with a feature, they prefer to remove the feature than to fix it.
Due to this, the Desktop Icons you see on Zorin OS are enabled by an independently created Gnome Shell Extension.
In Zorin OS, this is gnome-shell-extension-zorin-desktop-icons
You might try installing Gnome Tweak Tool

Launch it, then navigate to the Extensions tab (or pane) and disable, then re-enable the Desktop Icons extension. See if this jars them into the correct placement.

Zorin OS is made with a desktop known as "GNOME"
GNOME has officially removed Desktop Icons since GNOME 3 first released, so the Zorin OS team has re-implemented that feature themselves

Though, this can come with issues, as you can see.

There's community-maintained extensions, which usually get more updates than the Zorin one, like for example Desktop Icons: Neo, which you can get through Extension Manager from the software center

Make sure that before installing Desktop Icons: Neo, to disable the Zorin Desktop Icons extension from within Extension Manager!

that if they have any trouble with a feature, they prefer to remove the feature than to fix it.

GNOME 3 was made because Microsoft had a patent on the general desktop layout and design of the Windows desktop at the time, thus they essentially re-made their entire desktop to avoid getting into legal trouble

I doubt this was out of laziness, but rather out of fear of legal action.

GNOME 3 was made because Microsoft had a patent on the general desktop layout and design of the Windows desktop at the time, thus they essentially re-made their entire desktop to avoid getting into legal trouble

This is pretty debatable and has been getting debated for years.

thanks for your suggestion but it doesn't work on mine... my two monitor are with the same setup and both connected with HDMI.

You can setup keyboard shortcuts for commonly used programs, even have them open on specific workspaces/ monitors. This would bypass the bug you're experiencing (since gnome developers are not known for fixing bugs... would rather eliminate the "feature" altogether).