English as it should be 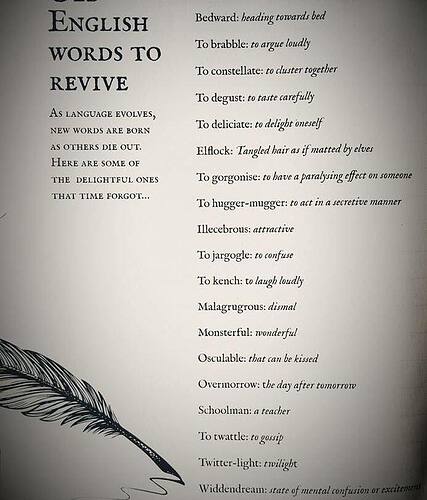 Some of these words gives meaning to the Nordic language. Like Overmorrow (overmorgen). It says that the Viking and Englishman could underestand eachother back then.

I can't even believe these words are forgotten! I didn't even know they existed! Then again, it did say 'to revive'.

I wonder how many more words have disappeared from the English dictionary...

I wonder how many more words have disappeared from the English dictionary...

A few that have been added to it need to disappear...

A whole bunch of them as far as I'm concerned ..... some people just want to start their own language so others have a more difficult time understanding them ..... me .... I just ignore them ....

Some of those words such bedward, braggle, elflock, overmorrow and t-attle I heard as a kid. My family came from Scotland, Wales, Ireland and some German.

The current misuse of some words drives me up wall. "Gifted" is one of them. An example would be "I gifted my car to my cousin". It has become the vernacular of the Vulgate I am afraid; the word, in the U.S anyway, was seldom used outside of the illiterate and poor communities. I am convinced it became mainstream just to make the illiterate not appear so illiterate.

There are plenty more such as the phrase "reach out". It is a psych ploy to convince the speaker and the spoken to that one is needy and one is there to help. Most people do not quite catch on to what some of the psych implications are in the change of the language.

P.S. I tried to post the word t-wattle and received a pop up that it was not allowed. So, I checked Urban Dictionary and find that today's youth have usurped another word.

So, I checked Urban Dictionary and find that today's youth have usurped another word

Most people do not quite catch on to what some of the psych implications are in the change of the language.

I recall some years back I had gotten a phone call from a psychologists office based on that I had mentioned to a physical doctor that I was feeling depressed.
She said they wanted to "reach out."
She talked about "getting treatment that I deserve" and "how I should care about myself to accept help."
I simply asked her
"So, I mentioned feeling a bit down, which all people do from time to time. And now you are trying to pad your profits by using Psychological Manipulation on me? You think this will make me trust you with my health?"
When it comes to humans, people show when they care. They do not need to Tell you that they do.

I think many people also just like to hear what they want to hear and will gravitate toward it. With eyes wide shut.

Ouch! That was a very good response you had...and very accurate. Doctors here used to never ask if you were depressed or suicidal. Now, you go in to have a toe nail removed and they ask you that.

I went to a new doc about 7 years ago. His nurse asked me if I had been feeling depressed. I said, "not since I was a teenager, but heck, every teenager gets depressed". She wrote that down.

Since then I always say "Nope, never been depressed in my life".

I live in Virginia, there is a red flag law here and indicating any kind of depression could cause them to go to the law and the law begins looking to see if you are a gun owner, have a history of suicidal thoughts, or have any domestic violence issues. Any of those and they swoop in, take your weapons and force you into treatment.

Even if you are not a weapon owner, nor hold a conceal carry permit, the law will come in, you appear before a judge, and you get mental health treatment. You will spend thousands of dollars to clear yourself.

Not picking on the psychologists or such but I read one time that they have the highest rate of suicides than any of the other medical professions .... but maybe that's because they listen to other peoples problems .... but then I also heard that they have their own referral psychiatrists to visit ....

Hummmm is that called "one hand washing the other" .....

We have one in our family a nephew ..... he is at present working on his Masters while working at a private college where we live ..... he is the guidance teacher ..... so I guess I can get free help any time I need it ....

I have read it is psychologist/psychiatrists and then dentist that have high suicide rates. Truth is that over the years I am aware of a handful of cases where the psychologist had emotional issues of their own and were in trouble with the State Board. I know one kid from my youth that at a later date, was getting treatment from a psychologist that turned out to be a ped-phile. I know one psychiatrist whose teenage son tried to kill her.

I know a young kid in my area whose girlfriend was getting suicidal. Her shrink had her on a mood elevator that was causing a lot of suicides. I pointed that out to him, he took her to another doc, changed her medication and her suicidal thoughts ended.

I have had casual/passing conversations with a number of psychs over the years and it soon became obvious that they were not on the same wave length as I was...and I considered myself more "normal" than they were.

I have a deep distrust of the mental health profession. I know they can and do help a lot of people but....

P.S. -- must be my night to test the swear filters. Just got a second pop up, this one says I cannot use the word ped-phile.

This is very suggestive.

When I was a kid in school, I recall that I had noticed that many of the teachers acted the age of their students.
Humans are social animals and they try to fit in.

Humans also are biased. We favor our own ideas and often believe our opinions are Truth™.
Psychology is a very important field. The better we understand ourselves, the better we can perform. For example, being aware of a bias and knowing about it is the first step toward overcoming it.
But psychologists, therapists and psychiatrists are as human as we all are. And are subject to the same manner of thinking.
A psychologist may presume that they know more than the patient and proceed to a diagnosis. Convinced that they are "right", they will push for the patient to agree with them.
And that is a dangerous trap to fall into. It can result in the doctor ignoring evidence that contradicts their diagnosis.
Of course, not all psychologists are like that.
But for those who are, it erodes trust among those that may need counsel.

Tangents can be interesting. But I must point out, this tangent has diverged a great deal from the thread topic.

That a dutch word too, and it also means here "the day after tommorow"

The current misuse of some words drives me up wall. "Gifted" is one of them. An example would be "I gifted my car to my cousin". It has become the vernacular of the Vulgate I am afraid; the word, in the U.S anyway, was seldom used outside of the illiterate and poor communities. I am convinced it became mainstream just to make the illiterate not appear so illiterate.

This has less to do with sounding smart and more to do with a misunderstanding of taxes many believe gifts can not be taxed, so whether given, sold, traded it is said. Believing they are outsmarting "the man" unfortunately anything worth giving the government wants a piece of unless you're rich and know a guy and can speak legal tax babble then you can opt out

I work in a diner as a second job, and occasionally people will write 0 for a tip for the wait staff and "gift" them a tip, but its still a tip - a lot of big brains out there........

I came from a family of generational alcoholics, on both sides. Somehow that disease missed me. I was a pretty messed up kid at the time; in the 8th grade I had to take a psychology class and I went into it with a rather negative attitude. The teacher was a former alcoholic and the entire class was driven by the psychology of alcoholism, the mind of the drinker, and the effects on family members.

That teacher was a life saver for a lot of people I expect. I understood so much more about my parents and myself after that class that it made a positive and huge difference in my life.

So to stay a wee bit on topic...one of the words of the day, or perhaps a phrase that I learned was "rightful thinking". I have used that so many times when discussing peoples conduct with them or when listening to someone who needs someone to listen to them.

Language is used by people, and since people are living beings, language is also a living being, so it does not keep the same form.

Language is used by people, and since people are living beings, language is also a living being, so it does not keep the same form.

Very true but I resent it when a minority change something for the majority just to suit themselves ....

I just get irritated by people, especially TV presenters and the like, starting sentences with "So,...blah blah blah". Skip the "So", it is just not needed.

So... what exactly about it bothers you?