Hello Zorinians!
I wonder could you advise me on the best way of expanding my Zorin partition? I'm running low on zorin space and I want to snag a bit of the windows partition, which is unnecessarily huge as I hardly ever use it and certainly don't keep any files there. I would get rid of it completely except for needing it to work on autocad files occasionally.
Anyway the present set-up doesn't seem to correspond to what I see in other threads. It was set up for me by a neighbour who helps me with IT stuff but is not really up to speed with linux. You'll notice it doesn't have a separate root or swap partition.
I'm not actually sure I need the swap as the system seems to have been working ok and I don't use hibernate mode.
Here's a couple of screenshots for your entertainment: 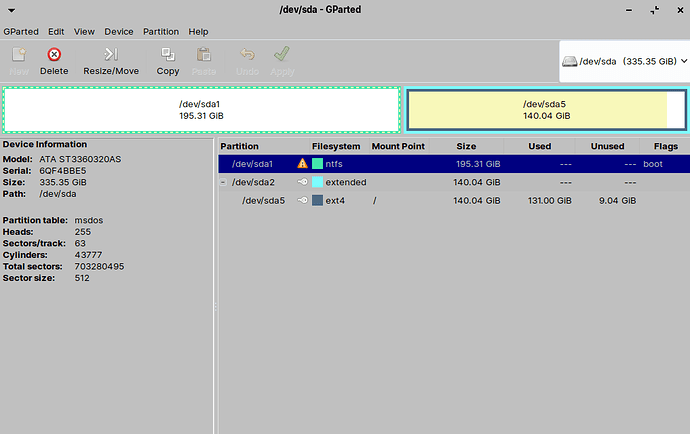 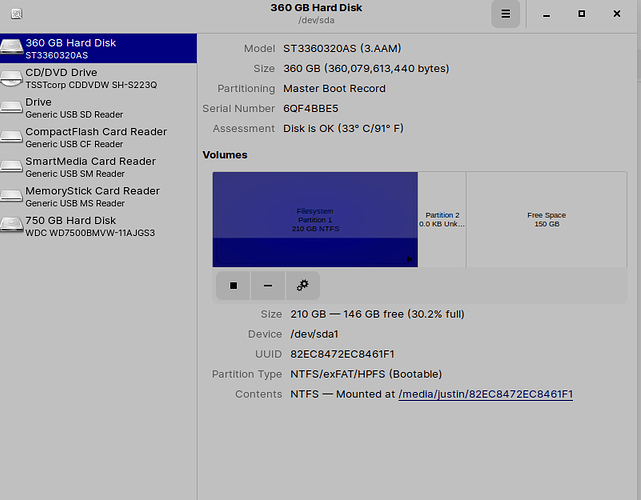 Screenshot_2022-02-07_22-18-57802×625 66.6 KB
Strangely the gnome disk utility looked different a week ago with the two partitions on the right being one on top of the other and both showing as 140GiB. Then I downloaded GParted from the software centre and the layout of the gnome disk utility suddenly changed! Hasn't had any detrimental effect though as far as I can tell.
I have Zorin on a flash drive so I can re-install, but I'd rather not have to go through all that pallaver and was wondering if it would be possible to change the size of the partition without having to start again from scratch?
Is it going to be impossible because the windows partition is on the left hand side?
The other option I've been mulling over is to do something a bit more radical; at some point I will have to upgrade to Z16 and I've got the impression from somewhere that if the root and home partitions are separate this will be much easier, so I'm wondering whether it might be worth doing a bit of housekeeping and getting things set up like that.
I'm dithering really, between a quick and easy solution to the immediate space problem and a more complex but ultimately desirable rearrangement of the furniture.
What do you think?
I would welcome your comments on this before I dive in and make a mess of it.
Finally let me just quickly remind you that I'm a computer dummy and that although I've copied and pasted stuff into the terminal before now, I had no idea what I was doing really. It's pitch black in there and I tend to get lost!
Cheers
Justin

I would suggest to change the size from the Windows Partition from inside Windows with Disk Management. After that you can expand the Zorin Partition.

Aha! That sounds like a solution for the quick and easy option.
Can I do this operation from inside windows while it's running?
And when I do the zorin partition expansion it will presumably be from the live usb?

I used a tutorial @Harvey if I remember and it working. Now just installing some drivers and software for daily using pc.

Defrag Windows thoroughly before you do so. I have seen too many instances of Windows files being corrupted due to fragmentation present during the resizing.
Windows is supposed to 'defrag(ish)' as needed during the resize but doesn't always seem to work that all out...

In order to expand into empty space, the empty space must be adjacent to the partition that you are expanding (they must be touching, side by side).
You cannot expand into a Windows space, if it is on the other side of the disk...

Ok I'll defrag first.
I've re-read a few threads and Harvey's tutorial and I think I've got my head around the basics of partitions.... more or less...
One thing I'm not clear about though:
When I'm in live usb zorin and finished adjusting the partition do I just shut down and reboot normally, or are there any other steps to set that in stone before rebooting into my existing installation?

I have one question on my ssd I have free 200GB space. It is better to leave that free or i can used that? What is best solution? In my Zorin xfce i have 3 partition efi,swap and root.

I would use it. No sense in letting it go to waste.

Donald and Aravisian thank you. It all went very smoothly except for the cat walking on the keyboard while the gparted was saving, which got me into a panic I can tell you. No harm done though luckily.
All the best