I'm trying to think out of the box when it comes to this icon theme. What do you think? What should such icon theme be named? 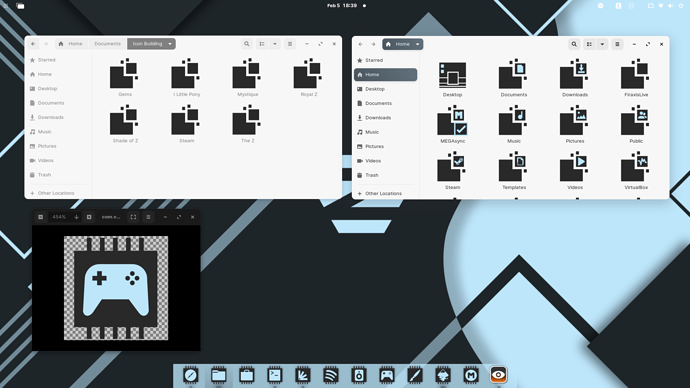 @Aravisian if you ever get time, can you make a GTK theme for this one? Only if you want ofcause

I was thinking something flat and square, nothing fancy.

It looks like it would need a light theme...

Only the background, the bar and side can be dark. 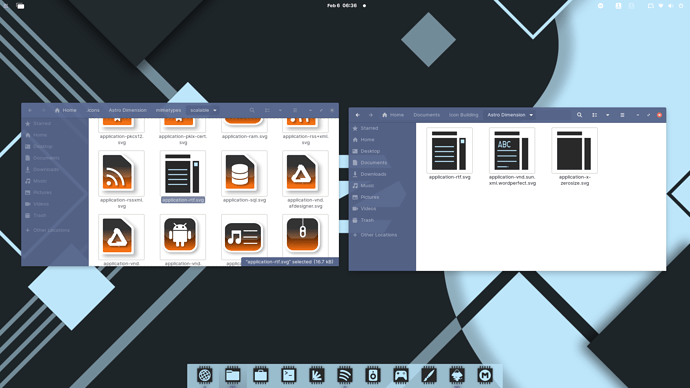 Let me see what I can conceptualize. Light and dark together in gtk3 works ok, but in gtk2 it can be a bit of a pain.

hank you very much. I'll really appreciate that.

Can you mega me a sample of the icons? This way I can measure them against backgrounds.

Sure. Hanh on...I'm fighting with Findus over the keyboard...

Put catnip on the mouse.

What is this color? It doesn't work as a Hex on any color picker I try...
EDIT: Nevermind, I figured it out...

It's from inkscape. You can remove the two last letter "ff"

Only the background, the bar and side can be dark.

No, the sidebar would have to be light too, unless you are planning on inverting the symbolic icons...

If they are symbolic, .svg... I may be able to use the .css color property.
Really... the best way to know is to have a fuller icon set at the ready to test against.
I will lay the groundwork for light and a semi-dark variants... Then complete the project choosing one once your icon set is ready for testing.

What should such icon theme be named?

The dark folders with only that lighten icon makes me think they are briefly being illuminated by lighting coming through the window so... Electric Light? Electric Storm? Not very creative myself, but I do like the icons!

If you play the game, or watch the game played on Youtube called "Control," there's a lot of juicy content that you can get from the game. When I saw your icon set, it made me think that the Astro plane was projecting from its dimension into ours.

Control was a game that was obviously made with deep story in it, almost as if it was a game made from a previous novel. Which it could have been for all I know, I haven't checked but, not many games have as much story in it as Control does.

I am glad you liked my name recommendation. Astro dimension, you could also use Astro Projection as well. Either would do honestly.