Why would anybody seriously support an unethical service that also has products that create mental health issues in adolescent girls? If you have a mind there are Social sites you can create yourself and your data is your data not Mark Zuckerbergs!

I guess maintenance will be a big problem. The Zuckerbergs have a pile of workers and a big office/company doing for them.

Admit it or not, a lot now depends on facebook or instagram or the likes. If your family and friends using that application to connect, will you avoid it? It looks like you're avoiding your friends and relatives not the facebook. (Happens to me since I stop visiting my facebook, instead been in discord and my relatives and friends are like "how can we contact you if not in facebook?"

Unless there is another social sites that can replace this one existing, like how it replace the previous ones, a lot of people will stick to it.

I do. Everyone that uses Facebook knows that they must communicate with me in another way.
It also helps me to avoid their drama and fighting.

Well, I'm not using facebook to avoid the drama though... like I already tell, they feel like I'm avoiding them too. My friend that I always talk in to discord experience the same thing. His relative even get annoyed to him just him deleting his fb account. We both laugh at how people react in that way.

That, is again, places by places. Of course, most people in Philippines still loves FB. You can see how many groups they have there, just for dating. Hahahaha. But if you go to Japan, FB isn't their thing cause they have their own "SNS" that isn't familiar with international.(I invade one of it just to go catch manga artists and learn from them.) though they are active in Twitter because they have Twitter Japan. Same with China. They have their own social media because its China policy. I don't know about Korea. 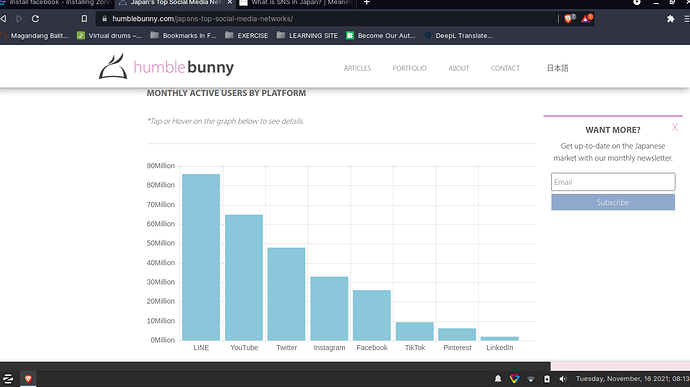 Interesting right? I once used that Line and if you just want to connect to your friends and anyone, its already so sufficient. Much better than Facebook etc.

(Meanwhile, Korea have Kakaotalk. I miss that one too, while China have WeChat)

Yes, I will. I don't FB, Tweet. I stay away from all social media. And although many in my family like, use Portal. I don't. I make them all use Jitsi for group chats.

I stay away from all social media.

I don't do social media either Jeff. I just never could get into it. And when you hear the damage that it has done to people and countries, it makes you hate it even more.

We let AI make decisions, and it has manipulated people far worse then we thought it could. Skynet is born, just not in the way you would have thought in Terminator. Its still just as terrible though.

Well in my case here, leaving social media means isolation. Ah well, I dont mind being alone for my whole life in this earth. hahahaha

Though it also means avoiding commissions and income that I can gain through this world so.

Lastly, this is just my opinion, the moment you got a gadgets at hand your privacy is already unlocked. The moment you go to open that internet, you already giving out your data. So, for me, what's the use of hiding? Hahahaha. And, does humans need to be afraid to its creation? Ha! Then, why continue to create it? Isn't it stupidity to create something you're afraid to?

Not to mention, govt. owns every single data of its citizen. Do you heard about DNA profiling system? Its much worst than FB or any social media sites.

You can see the fundamental problem there when it comes to Voting. Or being informed during a pandemic.

We live in a world that has been taking great strides toward the elimination of social biases. From gender to race discrimination. We have a long way to go, but we were making Progress.
Until Facebook began trying to exploit and profit from peoples preferred interests... And Undid a lot of that decades long hard work.

Because that was it is supposed to work. Even not in facebook or social media sites, internet as a whole shows recommended base on your searches. Thats the purpose of cache.

I ignore those cause I know all sites are made like that. SEO engines, keywords are made for that purpose. It was even hard to be in the surface of internet IF you are not top part of the searches since then.

The thing that make facebook stand out is because hate speeches rise. (wel my news feed doesnt have any of those. Never encounter in fb. Guess how) since a lot of users do trash talk to each other. Hahahaha. Acting with power or brave when can only fight inside the internet but not in reality. heh. Thats most users do in social media. Well, since internet become the fantasy where peoples dream came true: false relationship, false identity

This is valid. The internet has long been the bastion of anonymity as well as living a Fake identity.
I think the point I am making is more about the magnitude of Tipping the Scales than it is about what was always present.
Hate speech and biases have always been present in society. What matters most is how much of it there is. How much of it is influencing you.
Enough influence and the scales tip.