Oh yeah I forgot to mention the key point that the default selection of addons render every website obsolete. I really should've mentioned it

Really, they don't do anything. After disabling them, and installing some addons of my own, I didn't notice any problems with it. Also I checked all of the browsers with the HTML Compatibility test. They render modern websites correctly and so on and so forth. As a matter of fact you can give it a try here. It's nice.

Now the HELP! in the title gets a whole other meaning to it. I'll say it here people, if you don't hear from me again, you know who did it!

GNU IceCat shows the Zorin OS Forum as loading about five times (if not more) scripts than any other page I test.
On top of that, the Zorin Forum has always loaded extremely slowly.

I must admit - it is raising my hackles. Getting a feeling of insecurity on the forum, here.

With IceCat or Zorin? With which you feel may be insecure.

With the Discourse software the Zorin Forum is using.

I must admit - it is raising my hackles. Getting a feeling of insecurity on the forum, here.

Oh yeah Discourse is full of all sorts of junk

but I'd say the UI is very clean and modern. Freeflarum is also pretty good and looks a bit more similar to the old looking internet forums. It's like a mix of Discourse and og forums.
But in my opinion, Discourse even with all of it's bloat, is better than the old phpBB forums

They sure had their charm but Discourse is clean and inviting.

What does "clean"mean in this context? I hear a lot of other people say that...

The text font is relatively big and it's easy on the eyes. Posts do not cover the entire horizontal screen space which I think make them easier to read. The whole UI is very welcoming.
It has a lot of tiny details that really make forums POP.
Just as a comparison, check the KDE forums out. I wish they switched to Discourse or Freeflarum too. It's an old and unwelcoming design... gives me a lot of sad vibes... meanwhile here, its sunshine and rainbows

I find it interesting how perceptions can vary so widely.
Even disagreement does not reduce the validity of either sides statements.

But I prefer the phpbb or bb set up much more. How it appears depends on how it is themed. But aside from that, wider windows are easier to read and to navigate than these narrow ones. On Discourse, I feel like the old parsing options I have on BB and phbb is limited. I often feel like my hands are tied. As if some of the tools are gone. Quoting on Discourse is much more clumsy and trying to separate a quote out causes discourse to resist my efforts and no-parse it.
And I find the constant alerts about "this topic already exists... are you sure you want to post it? Almost Annoying Enough To Quit This Forum For Good. They drive me Insane.
To me, a designt hat can be called "old" that works is always streaks ahead of "new" if new doesn't work or limits my options. And just because something is old, doesn't make it outdated.

This is completely based on preference and opinion. There is no right or wrong to it- though I could be wrong about whether the Tools Are Gone... Maybe I just have not found them all, yet.

Yeah I see your points, even though that at this very moment, my taste is different, I think your points are valid. Also one thing I think worth mentioning is the variability and customizability of the platforms. I believe phpBB really encouraged customization and I remember every PhpBB forum looking very different... but with Discourse forums, they all look the same. At most the colors, and some minor css styling is different.
Also oh uh it is happening again

We're derailing from the topic. Should we move it to its own topic?

I'm still on the holy quest of finding an actually usable Web browser that is not plagued by spyware and corporate greed but I think I'm actually going to stop. It's because I feel like I've seen it all. I went all down the whole rabbit whole, I scraped the bottom of the barrel

... the short version is that, THERE ARE NONE.

The slightly longer version is that nobody has actually gone on the quest to make a free and viable rendering platform/Web browser... the truth is that, it is an extremely difficult feat to accomplish and people/companies rather work on other stuff. So what happens is that they eventually give up and use Chromium or some version of it and call it a day.
I was very shocked when I realized organizations like KDE (that exclusively use and promote free software) use Qtwebengine which is NOT a free software. But I don't think there is any foul play. I think it is more the case of no one doing anything about it. It is a very difficult and time consuming task, so I understand why developers don't work on such projects. I really can't do anything about it but I sincerely hope that other developers take some interest in this field and more attention is brought to them.

In the meantime, I'm sticking with Firefox... patiently waiting for a free, open-source, bloat-free, and geniunely viable web browser.

I want to thank everyone who participated in this thread. I appreciated all your insights.

I recently came across this forum thread on the Gentoo forums about a user which questioned the choice of Qtwebengine being based on Chromium and KDE using it in their apps too. It's an interesting and though provoking read.

p.s. I feel like the title of this thread should be changed to something like There are no good Firefox alternatives don't even bother looking

There's a lot of suggestions here, so forgive me if someone has mentioned it to you already, but have you taken a look at either SeaMonkey or PaleMoon?

I use SeaMonkey, but have use Pale Moon in the past. SeaMonkey has it's issues with some modern, rich media websites, but these can sometimes be patched by applying special UserAgent rules. The thing about SeaMonkey (and Pale Moon) is that they're not based on Chromium, but rather forked from Mozilla/Firefox. But, they're also so far down the "branch" that they're really their own projects now.

Not sure if they're a viable option for you, but I thought I'd mention it anyway.

Sustainable widely used software must be paid for.

If I make some small useful app, free of charge and free open source in my own time, that is a fine thing.
But when it comes to a Web Browser or an Operating System or drivers - those developers Must work on such projects full time. That's not something you do in a couple of hours on a weekend.
Who feeds the developers kids so that they have the energy to wear out their shoes, put holes in the knees of their pants and grow up to be developers with little kids of their own?

Maybe it was the Radio.

When the Radio was introduced, they quickly realized that there was no way to send a bill. It openly broadcasts. So... they called broadcasting "free" and used the other aspect that radio brought - advertising - to make someone pay for the station, the equipment, the engineers, the upkeep... At the time, it was a novel idea.
And an extremely lucrative one.
Google and Google Play of today is no different. However, any corporation always sets its sights on Increasing Profit. Increasing profit in advertising comes down to Targeted Market Advertising.
....Spying.

OR is it? Say you are sitting on a Public Park Bench near two shops. One sells bagels and the other sells doughnuts. You publicly observe 35% more people visit the doughnut shop than the bagel shop. Is this spying or keen observation?

I think what bothers us about our smart-fridge and our phones and our smart-tv's is that they can hear us sleeping. They can hear our private conversations. Yet, we wear the skimpiest of outfits at the beach and talk loudly in cafes about our most personal problems.
I have no webcam. If I need one, I can hook one up... But I will keep it covered when not in use. Same goes for the mic. My cell phone camera has a cover on it. I used to take the battery out when I wanted more privacy but cell phone makers fixed that... They claimed "green" batteries (They really are a little bit more eco-friendly. Not a lot... Every little bit helps, I guess...) and glued them in. And they are squishy, so removing it destroys them.

Is it Us? Did we get spoiled by Radio? We demand free, free, free. Free Open Source means Freedom, not no-cost. And our desire to get for free while someone else works hard to produce shot us in the foot.

So we have Chromium and Chrome and Google.

have you taken a look at either SeaMonkey or PaleMoon?

Yeah I took a look at them a few times. They are not horrible, at the very least they are not based on Chromium

but they are plagued with issues of their own. You already mentioned a problem with it. At the end of the day, the impression that I got was that it's just a less functional fork of Firefox.

Yet, we wear the skimpiest of outfits at the beach and talk loudly in cafes about our most personal problems.

I share your points with a lot of things you said. I think in this case, it is willingly shared information. People willingly do those actions with the intent of others observing them. But when they are being watched 24/7 with no control, that's when it gets bad. I think the line should be drawn between what is shared willingly and unwillingly.
As for payments, I totally agree. Open source developers definitely should have a way to earn their living.
I'd say the open-source movement would've probably not happened if the other corporations weren't so greedy. I mean personally, I'm totally fine with sharing some of my information to repay and help the corporations provide free and high quality services to the world. But I think it's very important of having direct control over what to share.
Personally, I have... or at least used to have a high degree of respect for companies like Google and Microsoft. They provide so many high quality services for free to everyone which increase the quality of life and education of everyone world wide. That's a discussion for another topic so I don't go deeper. But eventually, they all got too greedy and their questionable actions made people like me totally change their stance and move to a whole different Eco system of applications, platforms, developers, and users.
It's like after being bit by a snake, a person becomes extremely careful, protective, and hyper aware.

p.s. I feel like the title of this thread should be changed to something like There are no good Firefox alternatives don't even bother looking

Or "Firefox Alternative. The quest continues"

Also I forgot to mention this but special shoutout to Browsh. 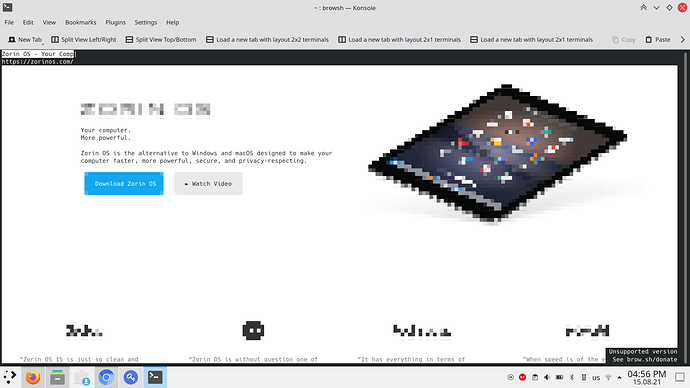 But jokes aside in contrast to w3m and others, I can tell what I'm looking at. That's something

This article popped up in my news feed this mornin'... 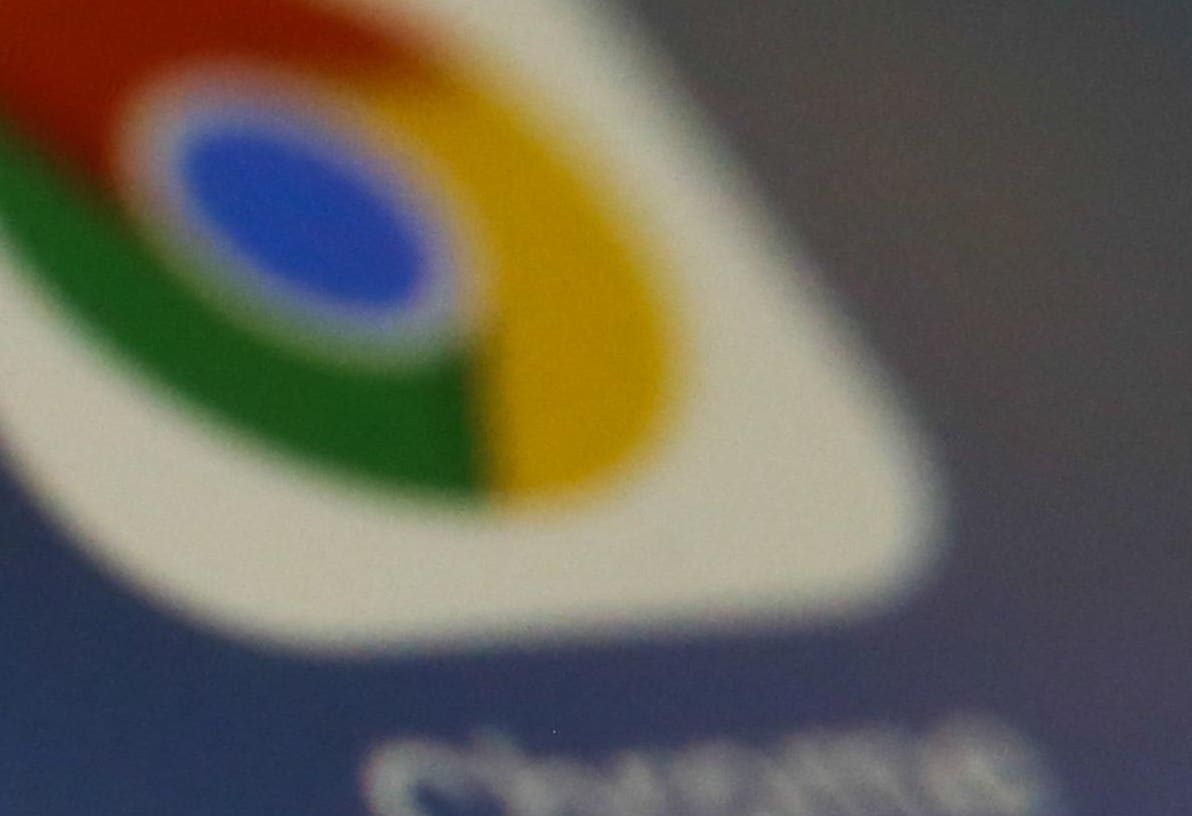 Why You Suddenly Need To Delete Google Chrome

You don't have to Delete it if you don't have it installed in the first place. Bit more tricky on Android though.