After much playing with other distros and watching everyone deal with issues with the new Lite version, I am glad that I have had a no problem with Gnome 16 Pro running on my go to system.

I have decided that regardless of what the critics say about Gnome and the mention of the Brighter, better version over the horizon. It's not worth it IMO to go through with headaches being encountered. Tweek this tweek that, add this remove that.

Gnome meets my needs, runs almost to perfection in my system. I can't see making a change when it's just darn good as is!

I power on and it works every single time. I like constant reliable and dependable OS that I can use daily for All.

Have the utmost respect for the Zorin brothers and what they have created. Thanks for helping me have something far from what M$ offered for 4X what it cost to do what M$ couldn't.

Hope to be able to provide help for others crossing over in the years ahead. I figure its the least I could do.

watching everyone deal with issues with the new Lite version

Please link directly to all these threads of everyone having issues with Zorin 16 Lite so I may try to help.

I do understand you point(s) Bubby, but some users like to tweak or "poke" Linux/Zorin a bit.

While using Lite I discovered that it has this feature of setting the desktop with a changing background for the time one wishes.(can be done within the desktop settings).

I know it's just an extra feature, it does not improve the system of any kind. To me Gnome is running perfect like a good oiled car/train.

Even though I have no problems, I still I wanted to try this for Gnome, because Gnome lacks this feature. So yeah, I'm one of those users I guess.

BTW I did succeed to write a script. I have a lot of wallpapers stashed on my drive, don't have the time or energy to go through all of them. Now they show per the time I set in the script.

If you like I can tell you how to do it but then you also have to tweak, you Duvel drinking, Unicorn riding Fairy chaser.

After a long wait for Lite, and using it for a couple days, I have had no issues. I have not seen "everyone" having issues on this forum.

**Sorry did not mean to reply to you exclusively Aravisian . I hit wrong reply button.

Hey I ain't knocking 'em! I tweak music most of my life. Trying this and that, but I want some normalcy in things outside of that. Whatever "normalcy" means. Ha Ha

I'm in my 60's and while I'll still toy with the other distros out there, Zorin is home for me.

That's what separates Zorin and Linux from all others...the ability to be you. Our little family forum is a cut above. Having the chance to express and watch others
as they play too.
All the other forums are in disarray , making it tough to navigate and find answers. Not here use a search engine above and it locates in seconds.

having issues on this forum.

Just do a search...they are there...and I'm not going to spend my night to show every single one 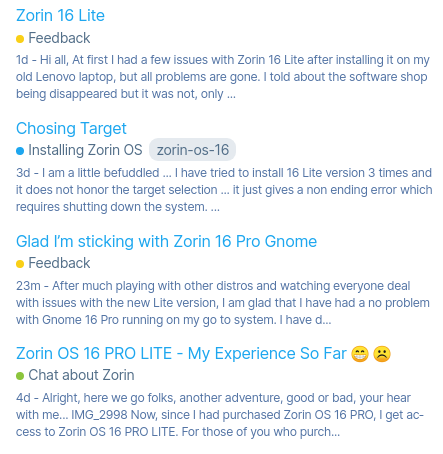 I understand perfectly what you're saying. It costs a lot of energy to put in those efforts. And sometimes one (hobby) is more than enough to keep you busy.
But it has a great effect on you, when you get the job done.

What also amazes me and I certainly like on this forum is that beside the tech knowledge and help they provide, they also posses a lot of creativity (guess that's what makes them tweak, poke) may that be in tweaking, adjusting, programming or the use of Art.
It keeps their feet to the ground.

Please link directly to all these threads of everyone having issues with Zorin 16 Lite so I may try to help.

Just do a search...they are there...and I'm not going to spend my night to show every single one

And I thought he was just joking, Aravisian I mean.
The man already has a lot to solve.

Please Link Directly To them, Bubby.
Your screenshot shows:

Please be mindful of the impressions you easily give thoughtlessly.

Zorin OS 16 Lite was only released a few days ago and to very little in the way of problems.

The man already has a lot to solve.

Not just him..ALL the Mods and regulars have much on their plates. THEY do GREAT!!

ALL the Mods and regulars have much on their plates.

Thanks for including Regulars in this.

The support shown by so many on this forum deserve recognition, but too often, only Moderators are credited.
That's a great thing that you include all.

This is a Forum of all users. And Mods really are tasked with moving threads or fixing titles or reminding users to not brutally assault each other and such. Everyone is encouraged to use their experiences to help us all out.
What comes around goes around.

With every new release there is going to be some cliches to be ironed out. I do not deny some people have issues, but to say "everyone" leads people to believe there is wide ranging problems. This also discourages users not wanting to try Lite. They may feel it may be a broken OS. Nothing can be further from the truth.

This also discourages users not wanting to try Lite. They may feel it may be a broken OS. Nothing can be further from the truth.

That is also what I am really afraid of.
Many newcomers to Zorin are often Linux novice. The blanket statement as such could have a negative influence for Zorin adoption rate.

Yes and I know the Zorin brothers worked so hard to get this out. It is incredible what they achieved. Especially when some of us were whining about the release of Lite!

Especially when some of us were whining about the release of Lite!

I am seriously thinking of switching my main desktop to Lite.
I only had a time to test drive it on my spare laptop and was very much impressed by its speed.
Besides, after switching I can evade answering GNOME related questions

Besides, after switching I can evade answering GNOME related questions

It is incredible what they achieved.

No sense in hashing that. I have been plenty vocal.

I am impressed with Zorin OS Lite. I always was. But what I am not is: Surprised.
I am not surprised that Zorin Lite is so good.

Zorin OS 16 Core (Gnome) however, did surprise me. It blew me away.
They made Gnome impressive To Me. Twenty minutes of reading the net will make clear the magnitude of that statement.

Zorin OS 16 is truly the Best Linux Distro I have seen. They found just the right extensions for Core.
Just the right taste for Lite.

I have zero issues with Lite. Judging by one or two persons is not correct.

And most of the issues are users errors

Judging by one or two persons is not correct.

Or several really. It's like the Veterinarians office... You only see the animals in need of help.
Any disparity between versions notwithstanding...

When you think about the vast number of Zorin OS users... and How Few of them we meet on here... It speaks volumes of the over-all performance and stability of Zorin OS.