Hard to remember where these settings live -- and why

As a Windows 10 user I hear and agree with constant complaints that settings are all over the place. It’s as annoying as it’s true.

But it can be trying when you spend minutes looking for something that should require seconds. To me it means the setting is in a non-intuitive spot.

Suppose you want to make folder in (the finder/file explorer) look bigger? That would be a Zorin ‘appearance’ issue, correct?

But it isn’t. Instead the feature is local to where you need it. 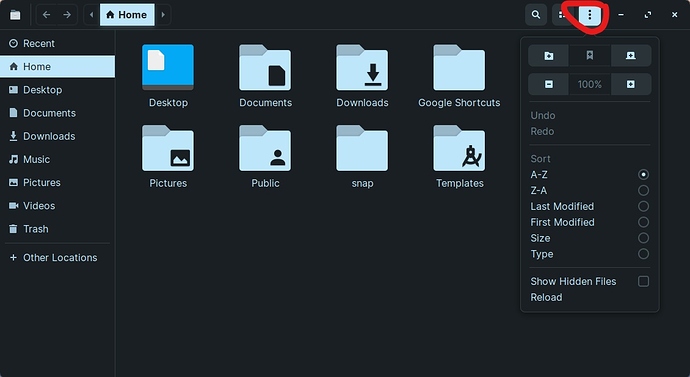 The problem is those dots are meant to not be too distracting. The ■■■■ in Win10’s FE ribbon is ugly as hell. But here is the opposite problem. They’re so gentle (?) they can be missed.

And I understand that having this setting local is important because, of course, sometimes you need to change the view fast. My point is that if you’re a noob to Zorin I’d bet most people will open Zorin appearance first. And get frustrated.

SOLUTION – If possible, in Zorin appearance, leave a tab for ‘Window View/Content’. We click it and one of two things happen –

Fancy would be that a window opens and reveals that adjustment settings. That is: you’re taken out of Zorin Appearance and into a window to said settings.

Acceptable is that a window reveals a dialog and picture explaining where these settings live.

An alternative solution is to give those three dots a different color than the theme. Not different. Just enough to say, hey, it’s me.

This one is simple. Zorin presumes that if you can’t see the pointer arrow you have bad eyes. So to make the pointer bigger you have to go to Universal Access. 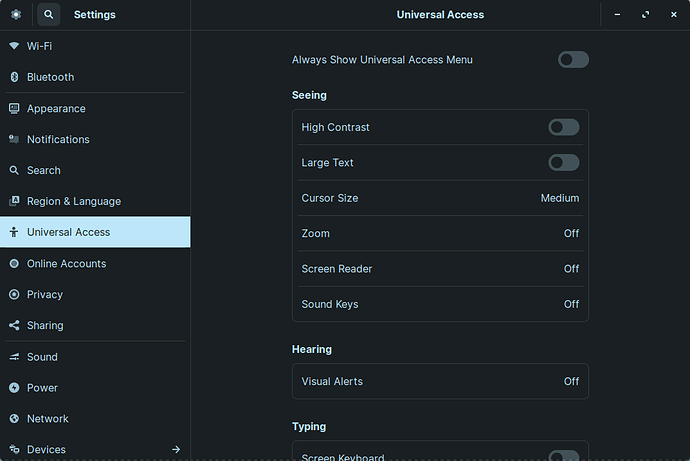 My problem is there are scenarios where this isn’t a vision issue at all. Hi DPI monitors, for instance, shrink that pointer to absurdity.

Or how about my scenario that my Zorin is on my Samsung TV? It simply needs to go up a notch to be easier viewed from 10 or so feet away.

So guess where I go? Mouse settings. The pointer is directly connected to the mouse, right? That’s intuitive. To me, at least.

At the moment I forget where mouse settings are, but I’d have that feature where ‘cursor size’ might be a setting right there… as well as the one in Universal Access. If that’s a hassle then either the fancy option of being brought to where the setting really is or the acceptable one of a dialog telling you where.

(Before I go – there’s a naming issue here. A cursor isn’t a pointer, even though they share the same space. Shouldn’t that setting read – Pointer/Cursor?)

Win10 got this one right. The most intuitive place for PANEL settings? Right click at the panel. 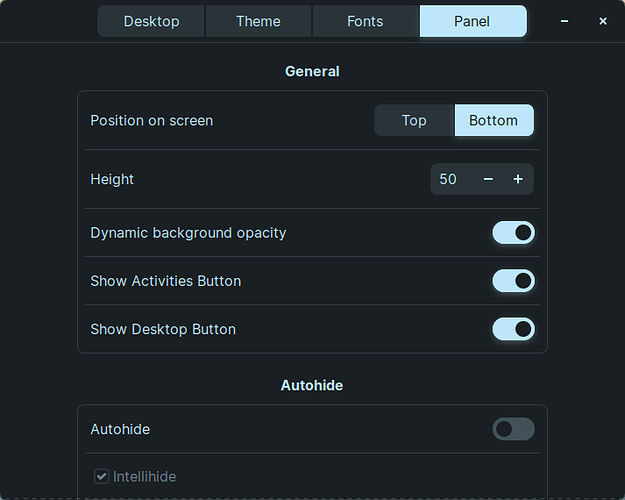 What does Panel have to do with appearance? I mean, yes, it appears in front of you when using Zorin (lol) but, like the windows, it’s also a thing onto itself. I don’t mind if the panel settings appear in appearance. What I mind is that they do not appear in the panel.

This is sort of the reverse problem with managing windows.

Again, not trying to offend anyone. Just sharing my feedback.

Again, not trying to offend anyone. Just sharing my feedback.

I must point out that most of your points reflect decisions made by the Gnome Desktop Development.
I, too, have given very critical feedback of Gnome and how it is daunting to a Windows User.
The Zorin Team makes very strong points as to why Gnome is preferred over a different Desktop Environment. However, this could change if support for other Environments grows.
I started out from Windows on Zorin Core with Gnome. It was nothing but problems and headaches and finding solutions.
Then, I switched to Zorin Lite XFCE desktop. The settings, configuration and associated problems with Gnome vanished. I felt liberated, like I had control over my desktop and could use it effectively at long last.

Later, I changed again to the Cinnamon Desktop Environment run on Zorin Lite.

One of the points you make is about the three dot icon used on the content view toolbar. That can be changed by changing the Icon theme. Exploring themes is a great way to expand your horizons and get a kick out of your desktop appearance.

Well, just bear in mind that Gnome has a bit on this and Team Zorin have to do what they can. That is where Cinnamon DE is somewhat better. And whilst KDE is not as good on the Accessibility front it’s a DE I am starting to fall in favour with again as it is my daily go to (on another OS) whilst working from home. (I have since installed KDE (Plasma) on Zorin but it is not as up-to-date as FerenOS. I have to admit that I think I slipped up in the Unofficial Manual on the Windows Appearance so apologies to all for that missed bit - I’ll need to take a look and perhaps amend it but later guys!

I, too, have given very critical feedback of Gnome and how it is daunting to a Windows User.

I’m a Mac user of 29 years who ditched when Windows 10 came out. Tim Cook is no Steve Jobs. The person who showed Steve what I call the iPhone’s ‘canoe’ notch would have been fired 3 seconds later.

Switched to Windows 10 and had to learn ‘it’ all over again. But I decided not to learn how to be a Windows user… but how to use Windows my way. This means you won’t see app shortcuts on the desktop or the recycle bin anywhere in view.

It hides in the Start Menu – 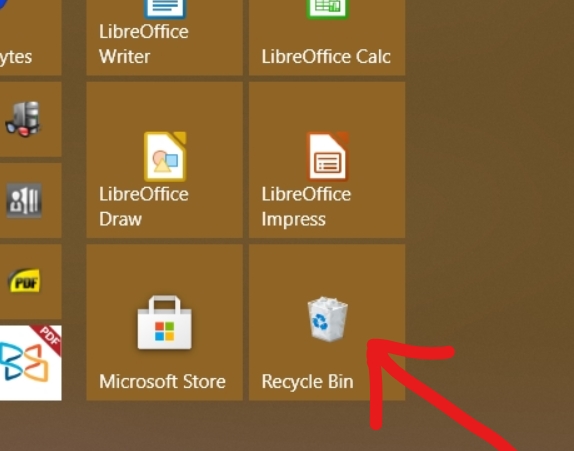 I also use an app (FalconX) to move my apps center in the taskbar. I added a ‘hot corners’ app (WinXCorners) and I have all the ‘Mac’ I need.

My problem with XFCE is it’s a backwards step for me. I like basic window animations that hot corners provide. Once you used to zooming all windows into view or out of view with a fast mouse move – you can’t go back. (Three finger gestures rule too.)

Thanks for the icon idea, but it’s the kinda thing I’d eventually learn. Half of why I made this post was for later reference.

The I discover all of my Win10 fixes are Zorin Core defaults, lol. (I use the third layout theme where apps sit in the middle.)

True story: I looked and looked and looked for a feature I recently found in Windows: one-click items and folders instead of double-click. But I couldn’t find it in Zorin. When I realized it was default – wow.

What I’ve been waiting for is a desktop look and feel which is basically Gnome Zorin Core.

True story: I looked and looked and looked for a feature I recently found in Windows: one-click items and folders instead of double-click. But I couldn’t find it in Zorin. When I realized it was default – wow.

In any Nautilus window, go to the top left corner and left click the little folder icon. Select Preferences. In the new window select the Behavior tab. On this tab, under Open Action select ‘Single click to open items’.

LOL! When I saw that screenshot I thought you were using KDE! That is what I’ve been using in another OS today - the rubbish bin is on my desktop - but it isn’t by default in KDE, it’s hidden completely! You have to had a wastebasket widget from the Widget panel.