Zorin Group company has announced that they are working on a Direct Upgrade path (the do-release-upgrade command) for a major Zorin OS release to the next major release. These are not 'point-releases' but are moving for example, from Zorin OS 15 to Zorin OS 16.

Currently, this is In Development. The process is not yet ready and has not been released nor announced by ZorinGroup.

This is an often asked about and much hoped for feature. Considering the ZorinGroups attention to detail, security and stability we can all only ask you to remain patient.
Please Do Not attempt to perform a Release Upgrade on Zorin OS until such time as the ZorinGroup Officially announces its availability.
We may not be able to help you to restore your system if it breaks here on the forum.
And you may lose valuable data, time and a non-achy head.

I wonder if will be possible to direct upgradefrom 15 to 16 pro if one has bought it. That would be neat, but might be difficult in practice I imagine.

The ZorinGroup is working on a Direct Upgrade option that will be available to all Zorin OS users, pro and regular alike.
Just remember that as of this date, 28 Aug 2021, it has not been released.

Currently, the ZorinGroup hopes to have it released by then.

Hi,
is there an update?
Thanks

We haven't heard anything from the dev's regarding the direct upgrade option.

Having said that, we didn't know that the Zorin dev's were working on Zorin OS 16 Education at the time. They literally just released Education a couple days ago.

Now that they have finished and released Education, I am truly hoping, that the Zorin dev's can put all their efforts now into completing the direct upgrade option.

Cause I agree, I am tired of this, erase hard drive, install fresh, and have to redoo all my settings and customization too. Its time for the direct upgrade option to be implemented. POP OS has already had it for I don't know how long now.

Linux Mint, Debian and Ubuntu already have this upgrade ability

Their teams/company are waaay bigger than Zorins two mans team, so have some patience, it will come

I would love to see this feature implemented as well. It's a pain in the.. to backup all the stuff, just to migrate to a newer version.

When will it be possible to effect an Upgrade directly from Zorin from 15.3 to 16.1?

I wait for this possibility now already for one year....

You are not alone.
No development timeframe for this has been published, as far as I know.

I had to have to carry out to the Zorin OS-Team with the request with regard to a direct upgrade possibility of 15.3 to 16.1 without complete new installation written. In the suspended screenshot you see the pleasing answer. 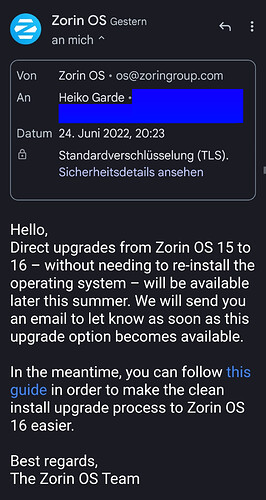 Great news. I hope to have the chance to update the system sooner rather than later, as an operating system designed about 4.5 years ago is quite outdated.

Hello,
I have just registered on the forum. First of all, I would like to thank the Zorin team for this user-friendly operating system. Secondly, I would like to know if there is any progress on this topic.
Thank you

Secondly, I would like to know if there is any progress on this topic.

Yes, there has been a lot of progress but currently a release date for this feature is not yet set.
A feature like this requires functionality across a lot of complex aspects of Linux:

Because of this, extensive testing is necessary to minimize user issues and ensure a good working experience.

News from the Zorin OS-Team:

OK. That gives me hope. And let's me wait until the end of the year ...

I am glad to see that while delayed, some progress has been made. This is a feature that we have been waiting 2-years for. I understand that things take much longer to implement, when you only have a 2-person team. I am just happy that the Zorin team haven't given up on us.

When I first installed Zorin OS 16, I was really impressed with the OS as a whole. Its very easy to use, its fairly easy to customize, overall a pretty polished OS that does what I need it to do.

Then Zorin OS 16 got updated to 16.1, which followed some bug improvements, and a few miner changes here and here.

Then now, we are on Zorin OS 16.2, many improvements have been made, but I am hoping that direct upgrade will soon follow. I am on kernel 5:15 now with Nvidia 520 GPU driver, wow how things move fast!

Before we know it, this OS will be up to Zorin OS 16.3, maybe even by spring of next year infact! And then after that, it won't be long before we see Zorin OS 17! Isn't that just so stellar?