I'm using Zorin for a little time now but it is only recently that I realised that my fan doesn't turn on at all. Windows used the fans at max speed when there was a high load and maybe at lower speeds to tackle little overheating but I don't think this functionality is available with Zorin.

I searched for this and have found solutions from Askubuntu which uses lm-sesnors and pwnconfig but doing a little searches I've found that the lm-sensors is known to make hardware crash or corrupt. Example

Is there a way to have fan work without risking my hardware ?

but doing a little searches I've found that the lm-sensors is known to make hardware crash or corrupt. Example

Can you provide more than that one example, which is highly questionable?

By default, fan RPM curves are governed by the BIOS on the hardware level. If your fans are not kicking on, then your BIOS probably has the fan curves set to not turn them on, until you reach a certain thermal threshold.

The reason your fans were running so much on Windows, is because Windows was overheating your computer, by mining your data 24/7 for their telemetry scam.

Congratulations, you are far safer on Linux!

PS: If you want to test your machine further, you could either load up a resource intensive gaming, or make your computer render a 1080P or 4K video in Kdenlive, and I can guarantee you, your fans will kick on eventually, as your CPU gets heated up.

Sorry I'm not able to find the other ones right now. But not going to lie, the last one did scare me a bit that while detecting sensors, the program overwrote some values causing problems.

I'll be glad if that is the case.
I'll test it doing some of things you suggested. Thanks

But not going to lie, the last one did scare me a bit that while detecting sensors, the program overwrote some values causing problems.

Thanks A, you vouching for it, does help me

Do you use any application or conky to actively monitor your temps? I use a Temp gauge conky on my machine that is always visible.
Current temp is 29 degrees C for CPU HDD is 27 degrees C.
If you know your temps, you can better determine whether the fan should be kicking in.
I, for one, am a Big Fan of Not Overheating...

No, I don't have any apps for it. I'll try conky

I would vouch that lm-sensors is quite safe to install and use.

And I can confirm that it is safe to install. Without LM-Sensors installed, then the front end GUI APP called Psensor would not be able to get the sensor data. I have had 0 issues with LM-Sensors, or Psensor APP.

There are other APPS that can control your PWM fans, if your BIOS allows it, MSI BIOS like my machine do not. But if your machine is one of the ones where the BIOS does allow PWM fan control access to your fans, you can use one of those nifty GUI APPS from the software store that allows you to control your fans.

Installed conky but it's not a widget and I can't drag the window. Selecting it just selects the icons underneath. Also cannot see the temps 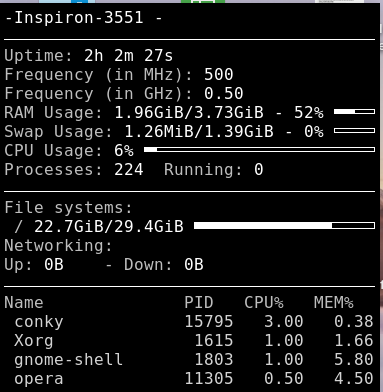 Conky is usually not a draggable widget, but can be. I can make you one if you like.
What you are seeing on that screen is a Default System Conky. ugly little thing, isn't it?
You can kill it with

You can use a better conky and if so - you will want Conky Manager. Use the Conky Manager to start and stop Conky's.:

If you prefer a draggable widget Window, yuo can use the psensor that @StarTreker mentioned. 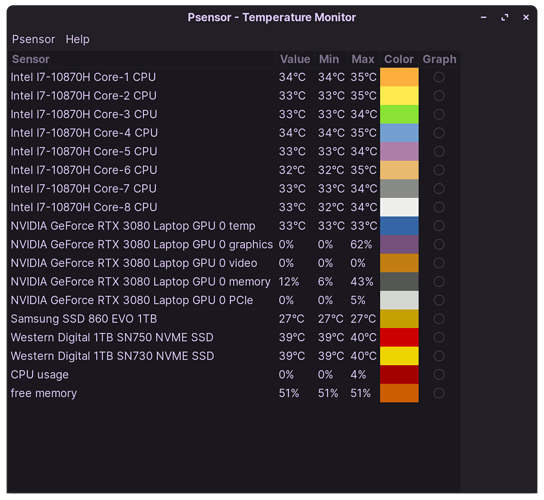