I am using a surface tablet with Zorin pro on, and for the most part it's pretty great. The only issue really being that most of the desktop variants not really jiving with rotating my tablet screen.

The issue is really when the favorite- and active programs are centered like with the windows 7 desktop, but goes for more except the vanilla one, he mac one and the ones that has the programbare vertically on the left of the screen. 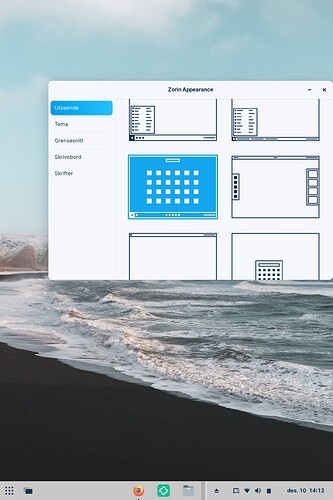 What this does is that it makes so there isn't enough space, particularly with how the spacing is set up with fractional scaling on. Which means there are only two programs visible at a time in the bar and you have to "scroll" through the programs, which isn't really ideal.

A lot of the settingswindows and the zorinappearance app does not really act well with the vertical screen, particurarly with scaling on, not being able to adjust to the screen.

I hope this is something that can be brought to the developers so that they are aware, can fix it and ensures a supreme experience to anyone who uses a tablet or 2 in 1 convergent computer with zorin in the future. Because let's be real, soon everyone in work, school or at home wil have something like this right now. Be it chromebook, dell xps, surface books or pros or gos or be it PC monitors with touch.

To be clear. This is with scaling or fractional scaling on. Everything works perfectly on normal, but on smaller screens or for people with poor eyesight scaling is very important.

This is with scaling or fractional scaling on.

Have you tried turning those off and then going into the Accessibility menu and setting text to Large or larger? I do this on my 1080p 15" laptop since the text was too small, but it doesn't have rotation, (non-touch) so I haven't tested that.

Yes, that works. But for smaller screens with high resolutions scaling is a must, particularly if it is a touch device, so it is not really a fix to the issue

It is true that rotation and scaling are both lagging behind in Linux.

We all love Linux.
But cannot be blind to its flaws. This is an example of one of them.
If there was Big Money in it, scaling and rotation would just work. But as it is, there isn't big money in it and waiting, hoping for an altruistic and knowledgeable-in-the-field developer to develop it is... unproductive.

Free means Freedom and I think that the entirety of the Linux Crowd needs to begin letting go of the concept of Free Of Cost. This is a good solid example as to why.
Developers need to get paid.
We need to accept these costs and in so doing, also ensure that they are not accepted later by Target Market Advertising.
We may not know all the code or be programmers or developers - this does not make us useless. We Can do Something About It.
By Supporting Developers.

This is why I've paid for the pro version and hope zorin for example can develop it and bring it upstream. I hope Zorin will try to polish it's OS so that it doesn't feel unfinished and that it is competitive with Windows and Mac

But it's not that this feature is behind in Linux, it just needs to be fixed. And without usertesting and input the developers won't hear about it.

Also, letting go of one of the four tenets would make the framework of FLOSS would make things inconsistent and useless. It's pretty dumb and embarassing.

The final solution is just not to use fractional scaling. The Zorin desktop isn't really built for it.

Without scaling everything works fine. It all just is super small and difficult to use with a touch screen.