Kubuntu 18.04 crashed so I installed Zorin

On my HP 4Gb Ram laptop I have been running Kubuntu 18.04 for some time but not without problems. One particularly annoying problem was that it used to eat up my Ram and the whole system would crash once the swap started thrashing. I had to force restart my laptop about 4 or 5 times a day but it sort of just became part of my work routine after a while. When I raised the issue on forums "helpful" people would point me to a web site https://www.linuxatemyram.com/ which was not helpful in my case as my RAM really was being eaten on my linux system. I would run the "free" command and see the available RAM going down while the laptop was sitting idle and never being returned even when I closed down applications. Google Chrome seemed to be the worst of the offenders and at one stage I surmised that this might all be about Chrome but even from a cold boot and sitting at the Login screen it would eventually crash.

Well a couple of days ago, still running Kubuntu 18.04, I rather foolishly tried to uninstall ffmpeg from the command line in order to update it to the lastest version. I only glossed over the large number of files that "apt purge ffmpeg" said it needed to uninstall and when I clicked Yes to my dismay it proceeeded to uninstall my Kubuntu operating system. I just grit my teeth and hoped for the best but when it finished I had an unbootable operating system (well it did boot but not into a graphical user interface).

Very fortunate for me I had previously downloaded a Zorin iso and copied it to a USB stick ready to install sometime when I was feeling brave (even though I wasn't feeling brave after this had happened). First of all I did a live boot from the USB stick and managed to salvage my important files on to my 1Tb external drive and then proceeded with a fresh install of Zorin. One thing I was a little dismayed about the Zorin installation process was that it didn't give me an option to partition the disk into a system and home partition. That was a mistake I made previously with Kubuntu. However the installation process itself seemed to go okay. I was able to boot back into the live USB and repartition my main drive that way (found a tutorial online).

My experiences with Zorin so far? I was a bit worried about losing the Kubuntu desktop zoom but I managed to find a tutorial on how to switch to the ComPiz window manager which has an Extended Desktop Zoom feature that doesn't rely on a mouse scroll wheel (I have a trackpad). A little bit of a process to set up but it wasn't formidable. Then I just had to go back reinstalling or my usual applications including Google Chrome.

When I installed Zorin I was concerned whether going to a late model OS from a dated Kubuntu 18.04 OS was going to put more pressure on my RAM. However any desktop sluggishness seems more related to overloaded disk IO rather than pressure on RAM and I have not yet seen my available RAM go to zero even though I have had my laptop on for several hours with Google Chrome open. Therefore I am starting to wonder if it wasn't Chrome that was causing frequent crashes I wonder if it was Kubuntu 18.04 (which is supposed to be a stable LTS release). I have not had any crashes yet which to me is surprising. The latest piece of software I need to install is Skype which I am hoping wasn't the culprit before all this time but will see how I go. Maybe I should have done this earlier. I may have saved myself a lot of pain. I am just hoping this doesn't end up as "famous last words" when I install Skype.

In the future, I recommend using the reinstall command, instead of removing to reinstall:

my RAM really was being eaten on my linux system. I would run the "free" command and see the available RAM going down while the laptop was sitting idle and never being returned even when I closed down applications. Google Chrome seemed to be the worst of the offenders and at one stage I surmised that this might all be about Chrome but even from a cold boot and sitting at the Login screen it would eventually crash.
(skip)
...sluggishness seems more related to overloaded disk IO rather than pressure on RAM...

Possible memory leak or i/o error.
I have had similar experiences on distros, which is one factor that keeps me on Zorin OS.

I agree with Aravisian.

I am glad that so far you are having a good time with Zorin OS. I personally love Zorin OS. Its far from perfect, oh yes. But I find that overall, its better then many other Linux OS's.

In the future, an APP that I really love and recommend for managing your system, and monitoring resource usage, is Stacer. You can install Stacer from the Software Store. 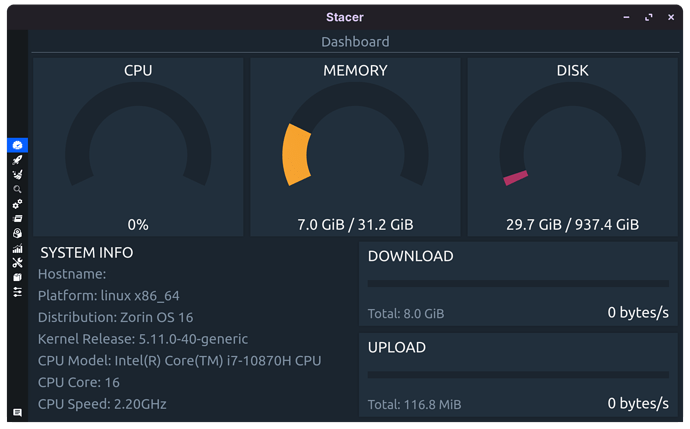 Interesting comments from people about memory leaks. "free" is telling me that I have 1.1Gb available after installing Skype and I also have Thunderbird and Chrome open so I am not terribly surprised there. Closing Thunderbird and I see I have 1.8Gb free. (With Kubuntu closing an app would not cause the available RAM to go up).

I might look into Stacer when I get a chance.