It has been a while since I started using Zorin OS and I think this OS is great because even I, who had no knowledge of Linux, can now use it. However, I think it needs to be more user-friendly if it wants to compete with Windows.

First, since most Windows users never use the command prompt or PowerShell, I hope that Zorin OS will not have to rely on the terminal either.

Second, I am not happy with Gnome. It has poor functionality for the large amount of resources it consumes. If Zorin OS can make the beautiful UI that it does now, please consider switching to another desktop environment.

In closing, I'm not looking for a workaround, but rather a development of the Zorin OS.

If you're not happy with Gnome, why not switch DE?

I'm not looking for a workaround, but rather a development of the Zorin OS.

And for me, it is difficult to grasp the structure of Linux, where the kernel, DE and so on are separate.

I think both Gnome and KDE are heavy on resources but that does not put me off KDE (Plasma). Personally I prefer LXQt over xfce because it uses Qt libraries the same as KDE Plasma. So to me, the obvious choice would be to ditch Gnome and xfce for future releases. In KDE cursors are simpler to change. You only need to start typing cursors and a search bar appears at top of screen and brings back the result cursor themes select that then choose theme and resize from the interface. LXQt uses a simple menu similar to Windows 2000. It was built on LXDE which it replaced. 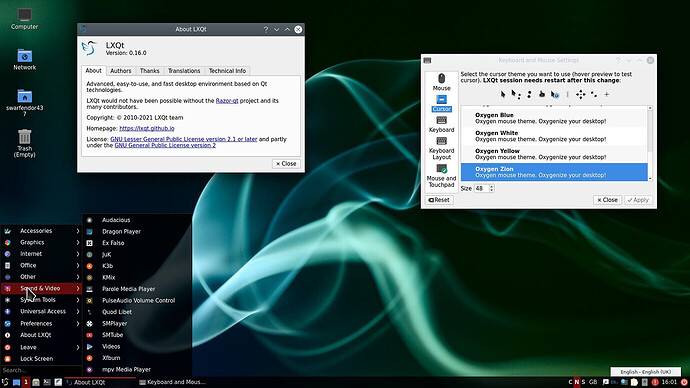 In respect of the terminal, sometimes it is the only way to resolve issues. You don't need to learn too many commands and is less likely to break than a GUI interface backend.

@swarfendor437 How many Linux desktop environments are there? And how much knowledge and effort is required to choose one of them? If Zorin OS really aims to replace Windows and Mac, it needs to show a smart path to the goal.

You don't need to learn too many commands and is less likely to break than a GUI interface backend.

It is not uncommon to see many sudo in a thread on this forum to solve one problem. It may be common sense for Linux users, but I don't think it is a true GUI environment.

Lite is using a different DE (XFCE) and it still has its beauty of Zorin. Lite is not a step child and is supported equally as core - Perhaps lite is something for you.
The beauty of Linux you can pick and choose the DE you want.

How many Linux desktop environments are there? And how much knowledge and effort is required to choose one of them? If Zorin OS really aims to replace Windows and Mac, it needs to show a smart path to the goal.

Furthermore, if Lite is sufficient, what is Core for?

Linux is also by choices (among other things). It sounds like you are more comfortable with Windows or Mac environments that gives you no choices. Linux is not for everyone, maybe Linux is not for you?

@Storm My point is that if Zorin OS is really going to surprise big tech, it can't use being Linux-based as an excuse. I understand that it will be difficult, and even if it is impossible, I will continue to use Zorin OS, because I don't see the future in Windows and I don't have the money to buy a Mac.

You want Linux become Windows? Is that it? Well it will never happen. Linux is Linux on good and bad (as with Windows and Mac). Linux is big, it's everywhere, from refrigerators to nuclear-missiles to supercomputers. The one thing it aren't big is the Desktop market.

@Storm Are you qualified to decide what Linux should be and what Zorin OS should be? I dare to make a tough suggestion because I feel that Zorin OS has a future.

It doesn't matter what I think. I have been using Linux since 1999 and its eco-system is what it is and still is. Windows/Mac comes Pre-installed on 99,9% of Desktop computers and as long this is, nothing going to change.

First, since most Windows users never use the command prompt or PowerShell, I hope that Zorin OS will not have to rely on the terminal either.

I've rarely had to use the command prompt... I can literally count it on two hands the number of times I've needed to use it. But I've also used it on Windows.... So for some things there is no escaping it.

And anyone using Zorin for more than a day would see it is not needed to use.

Second, I am not happy with Gnome.

Then install a different DE and use that. I hate Gnome and I use Cinnamon. There's also KDE, and others if you don't like Gnome.

I'm not really sure what kind of development you're actually looking for in regards to the two things you mentioned they are addressed already.

Are you qualified to decide what Linux should be and what Zorin OS should be?

And you are? Like @Storm I've been using Linux since the late 90's. Things have come a long long way since then. You used to have to compile Alsa if you wanted sound.

Linux is already everywhere, what do you think runs most of the internet servers? Windows? No, it's Linux.

Your suggestions are nothing more than making Linux exactly like Windows. No choice, no customization, beholden to whoever.

Zorin is a distro btw, it doesn't control all of Linux.

Linux is not Windows, just like Windows isn't Mac..... Nor should it be. If someone wants to use Linux they will have to learn some new things. Just like nobody just knew how to use Windows, they learned it.

I believe in the aspirations of Zorin Dev, but I have found my opinion is too radical. There is no point in arguing any further here and I would like to keep an eye on future developments.

I apologize for my rude remarks and lack of understanding of current Linux common practice.

If there is something you would like to see changed then ask how to do it. I didn't like Gnome either so I looked around and found out about Cinnamon DE. There are tutorials on this forum and others that tell how to install a different DE. The beauty of Linux is that you can configure it to work the way you want it to.

I used Windoze from 3.1 until about a year ago. I actually liked Windows 7 but despised Windows 10. I just got used to the way things worked in 7 and did't want to have to learn all over again how to use Windoze.

Well guess what, you can configure the Cinnamon DE to look and act almost exactly like Windows 7. So once I did that I was again able to do my projects in a way I was familiar with. And if you want to try Linux Mint instead of Zorin, Cinnamon will work there also and look almost the same as on Zorin.

As some of the others have said no one was born knowing how to use Windows. It took some time for all of us to learn it. And the same of course goes for Linux. But after a year of use I would never consider going back to Windoze.

Ii realize all the choices can seem overwhelming but you don't have to jump in and try them all at once. You can gradually try different things until YOU decide what works best for YOU.

@Hackgets , I see many helpful replies in this thread.

I think that in life, for many things, how we approach a problem has a great deal with how we perceive the nature of that problem.
Linux, as a whole, is a complex Operating system, with many components written by a very large number of contributors.
Looking at this way, it is easier to see that Linux cannot merely be adjusted and changed, anymore than Windows or Mac, can. They are founded and established.

This is crucial to all endeavors. No one will get very far while doubting what they can do.
You can handle whatever Linux has to offer. Accept this knowledge, first.

Things may not always be as you expect. Fortunately, there are many available options in Linux. I prefer other desktop environments than Gnome. I use XFCE or Cinnamon. Zorin OS Lite comes with XFCE all set up.
Complimenting the flexibility of Linux with flexibility of your own can open up whole new worlds.

Everything Zorin OS and Linux offers is quite easy. But new things never look easy at first glance. When you do not know what something is... How can you gauge your ability to handle it? Imagine a lion that never saw a human before. He is capable of besting that human on his weakest day, but given that it is a new and unknown threat, he would most likely run from the human. Until he does some learning...
On Linux, you are the lion. Enjoy having the power over your Own machine, rather than fearing that power and hoping another will responsibly use it for you.

Windows OS dominates the market. By far. Even Mac OS, a solid and well established Operating system, gets less than 7% of the share. Zorin OS exists not to compete with Windows, but to allow ordinary users like you and me a viable alternative to Windows.
Trying to replace or oust Windows would be not only fruitless, but ultimately, a destructive action.