Anyone installing the latest round of updates may run into this if you use pipewire. Because of Pipewire's use of bluetooth, it interacts with the Wifi/Bluetooth adapter on your machine. This usually has no effect whatsoever and interacts seamlessly. This latest update, though, doesn't allow the wifi adapter to connect after the update. While this is annoying, it is easily fixed.

In the terminal (I'm sorry, but there is no way to do this using the GUI), after the update, type the following sudo lshw -class network. This will give you output regarding your device. You will see something similar to the following: 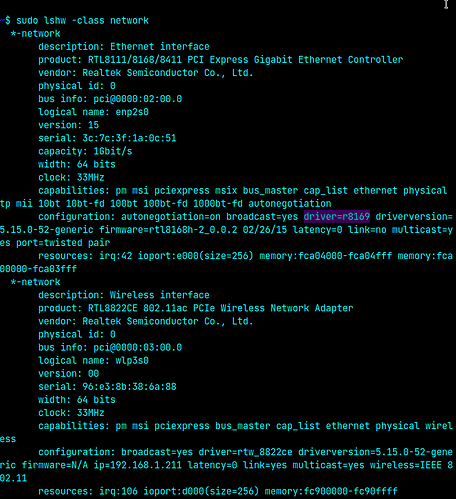 You will notice that my driver is highlighted (r8169)(Yours won't be, I did that for emphasis on the information you need). You need this information so that you can remove and re-add the driver (essentially removing and reinstalling your network card). You will have to use your own network driver, which may not be the same as mine.

While it is recommended almost everywhere that you reboot between the removal and re-installation, I had no problem doing both commands back to back without reboot.

Reboot.
This should fix not being able to connect after the pipewire update.

Well no surprises as it is dependent on Systemd and lo and behold yet another Red Hat software development carnage who also brought you Pulse Audio. So glad I stuck with ALSA.

Is that not the driver for your ethernet adaptor?

I have exactly the same wifi adaptor and ethernet on my PC, btw.
I have been tearing my hair out over a networking issue all day but on ethernet not wifi.

EDIT:
But this did not fix that issue

The wifi/bluetooth adapter is one and the same. They have been manufacturing wifi adapters to include the Bluetooth frequency of not its own radio on the board (depends on the manufacturer, though lately they have both chipsets).

Ethernet may possibly be a different card entirely, possibly built right into the MB. In the lshw command, you will find a different driver for the ethernet or lan device. Restarting the driver (removing and installing again) may fix the issue... may not. Open a thread for your issue or provide a link to it and we can try to solve it.

What I mean is you put this as a fix for Wireless/Bluetooth but in your example the driver you've stopped and restarted is the Ethernet driver in your image.

Since the wireless is all in one, wifi and Bluetooth, removing the device either way may resolve the issue.

There is more than one way to do anything in a computer. Not every way works... and my issue was with the wifi card, hence removing and adding it. Had they been seperate cards this wouldn't have been an issue.

This has been great.
Like talking to a wall.
Just ignoring what I wrote.
Never mind.

I had to re-read all that was written.
I can see both sides of this one.

In the O.P., @337harvey highlighted the ethernet driver in the image, instead of the Wifi Driver.
@bubblegun pointed out that this can be confusing to a reader, thinking that is the spot they need to look to resolve an issue.
337harvey pointed out that the procedure is the same, the methodology is the same. So it does not really matter since the user must look to their Own Terminal Output no matter what.

Hopefully - a quick synopsis can provide some clarity.

Thank you.
I was simply thinking that if someone else were to read the post/thread in the future then the syntax used should be correct for the situation as depicted in the O.P. I didn't expect posting a correction to be so laboured.

I didn't expect posting a correction to be so laboured.

I get this a lot in day to day communications with folks... I think I hurry and don't always explain things very well.
Or like this example where two different perspectives bounce off of each other depending on the important thing on each persons mind.

This happens with me often enough that I think I must focus on my intent and thoughts to the point of thinking other people must be mind readers.