Of particular concern is the screenshot where it says the updater is going to remove Zorin OS Desktop.

When in doubt, backup your files and then run the update.

Thanks for sharing your thoughts, StarTreker and carmar. Since I did the upgrade via the terminal, it did reduce the number of items that show up in Software Updater. And if it hit Continue instead of Partial Upgrade, it says everything is up to date.

So I think I will wait awhile and see if this clears up on its own or if a future update takes care of it. Those are my thoughts for now anyway. Always subject to change.

Hmmmm? I did the update and full-upgrade command and upon reboot I am presented with this look like PopOS is on my computer. Not exactly what I anticipated or had in mind. StarTreker did you put this on my computer?

StarTreker did you put this on my computer?

I initiated the partial upgrade that I was presented with, I did nothing else then that.

Additionally, I do not have any elements of POP OS on my system, no System76 repositories that I am aware of anyways. I have the Popsicle APP installed, but thats about it.

It looks like you have a Pop-OS repository added in your sources.

I am sorry @zGnOmaha , I failed to spot this in the very screenshots you posted...

Since you must have added the repository at some point, that is what caused the partial upgrade to happen.
It just replaced your Zorin OS desktop.

What you might try if this was not your intention:
Remove the POP-OS Repository using `Software & Updates~ > "other software"

It seems that Software and Updates is missing. Can I add it back somehow?

I did this Same Thing... I added another Distro repository and I knew it was supposed to be temporary.
But I forgot to remove the Repo and later ran Upgrade command. It took a while and a lot of work to untangle it.
I suspect that the upgrade upped you to Gnome 40+...

What you can do is

Navigate in the elevated file manager to /etc/apt/sources.list/.d and Look for the Pop_OS Repository or Repositories and Delete any Pop_OS repos that you find.
Then reinstall zorin-os-desktop per the command above.

sounds like an opportunity to learn a bit more. I'll give this a shot.

sounds like an opportunity to learn a bit more. I'll give this a shot.

And learn you shall, thrive you will, for that is your evolution in Linux that is.

@Aravisian this is what I am getting after removing the popOS files and attempting to reinstall zorin-os-desktop.

Any other suggestions or am I in the zone of doing a reinstall of Zorin? (I have been so lucky for a newbie that if not now, someday my luck is bound to runout.) 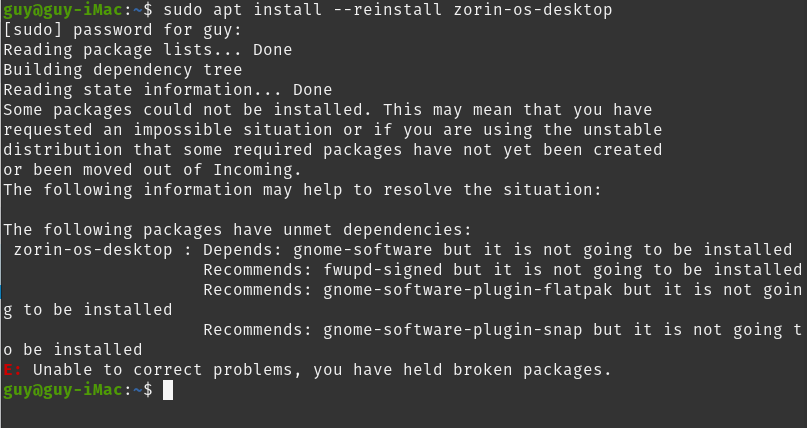 @Aravisian seems the broken packages are holding back the sought after corrections.

If I wasn't using the Software Store, Software and Updates nor the Software Updater, I don't know if I could tell anything was awry. (I have the popOS store now.) But I suspect the chasm will only get wider over time.

You said when this happened to you earlier, it took a lot of time and effort. I don't think I have the understanding yet to do all that may be required. And I don't want to impose on you for all the help it sounds like this could ultimately require.

I have two more questions I will humbly ask, if you don't mind, and then if they have no merit, I think I will go the reinstall route. One difference between your experience with doing upgrades over temporary repositories and mine is that you forgot to remove the repositories. In my case, I didn't know I needed to. So this is at least one more thing I am learning about Linux in this scenario. 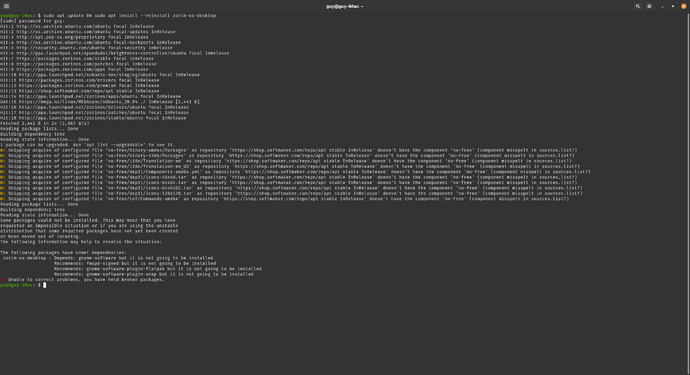 Correct me if I am wrong, but if my memory serves me correct, doesn't installation of Popsicle add PopOS repositories. Think we put out a public health warning when we had similar issues before, to remove Pop repositories after Popsicle is installed to avoid Pop updating and messing Zorin.
Anyone else remember this?

Ah, if this is true, that explains the PopOS repositories. I just assumed it was something I had done. But earlier when I was giving PopOS a spin, I didn't actually install it. But yes, I did install Popsicle about a month ago and I did miss the public health warning. But lesson still learned about one more thing to consider when installing software.

Would removing Popsicle help at this point?

You said when this happened to you earlier, it took a lot of time and effort.

The repository I had added but forgot to remove was for Linux Mint. Mint does something strange with the mintsources - which must be uninstalled rather than just removed.
That made things more complicated.
At the time, I traced my "fixing" steps and outlined them in a text file in my Documents folder in case anyone on the forum runs into the same issue.

You can choose whether you want to or not on these. They have no effect on the packages in question.

Correct me if I am wrong, but if my memory serves me correct, doesn't installation of Popsicle add PopOS repositories.

Yes, I suspected from the outset that this is how the Pop_OS repo was added in the first place.

Would removing Popsicle help at this point?

No, because it is only one package that deals only with itself, not with the desktop.

The Public Health Warning on Other Distro Repositories would amount to:
This Problem can arise if a Distro is using a Higher Version of Gnome Or other essential packages and their repository is added to Zorin OS to get a specific single package; If the Updater is run, it will upgrade all packages available in the repository.

Thank you, Aravisian and zabadabadoo. A nugget at a time, I am learning more about Linux. Linux is also helping me practice patience and perseverance. Not sure I will have any time to do the reinstall yet this weekend. Probably next weekend.

Actually a question about the reinstall. Would it be better to burn a new iso so I have the current one from Zorin or can I use the iso I burned when Z16 Pro was first released and then do update/upgrade commands after install?

Again, thank you for all you do here on the forum.

Actually a question about the reinstall. Would it be better to burn a new iso so I have the current one from Zorin or can I use the iso I burned when Z16 Pro was first released and then do update/upgrade commands after install?

Either should work out fine.