Issue I just ran into, I can't open my steam games that need proton to work because they immediately close the moment I open them. Footage is below.

They were working before, so I'm not sure what happened.

Can't you upload the picture to the forum. there's no access to to googledrive.

It's a video clip, I should have clarified.
You could request access.

I'm trying to give you access but Google-- wait, did you receive a message saying access granted yet?

I've updated the link to give anyone access without them requesting so despite the risks that practically ANYONE can see it.

I can see it now. But it's bit difficult to debug it.
Try run steam via the terminal and see for errors.

Also check if any recently update broke your graphic driver.

When I installed package updater, I installed an update to fix a bug affecting a daemon managing Thunderbolt 3 devices, whatever that means.
What's the command for opening Steam in the terminal?

That shouldn't affect the graphic driver.

to open a specific game in steam

How do I find the game I'd for a game on Steam? Is it the main menu app?

Also check if any recently update broke your graphic driver.

I don't think it's my graphics driver because I can run native games alright.

Yes, or look at its .desktop file in ~/.local/share/applications

This is what happens. You might want to zoom in a bit. 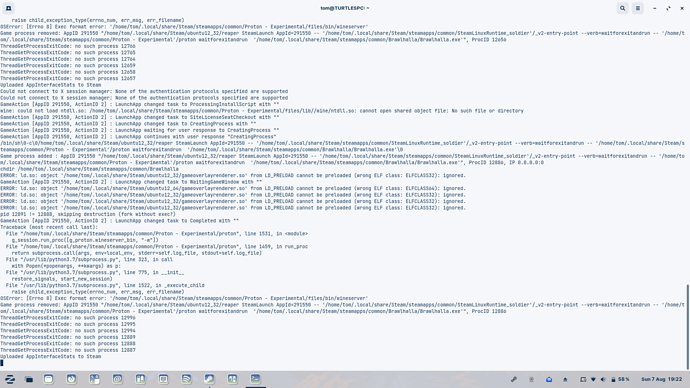 And it's only Proton games that won't launch? Do you recall Proton got updated? Try switch Proton engine and see if it launch.

It was Proton Experimental that was the issue. I changed to Proton 7.0. Thanks for the solution. I pretty sure that I always run into errors...

Experimental is like the unstable/nightly built where point-release is the stable one.

Last time i have installed stable proton and any my games not working then i back to experimental. Why a games are difficult to working on linux. Because linux mostly is created for servers and administration not for gaming. That is all true.

@Bourne it has nothing to do with that

Here is why Proton is hard to write. It's like to write codes in the blind:

Proton is a compatibility layer for Microsoft Windows games to run on Linux-based operating systems. Proton is developed by Valve in cooperation with developers from CodeWeavers. It is a collection of software and libraries combined with a patched version of Wine to improve performance and compatibility with Windows games. Proton is designed for integration into the Steam client as "Steam Play". It is officially distributed through the client, although third party forks can be manually i Proton...

So this is like a war with aliens in a cosmos. You never know what should to go.