Is it possible to fix so you can resize a window from the lower right corner? I think this is annoying not to be able to (maybe since I try to switch from a Windows os).

I'm not quite sure what you mean. You can resize windows from any of the 4 corners. Could you elaborate more?

Is it because I use the lite-version I can't resize from all corners?

Hmm I believe it is also present on Lite. Could you maybe provide a screenshot?

Well, as a beginner, I didn't notice until now that it acctually is possible to resize from all 4 corners but with a "bug": the upper corners give you several pixels in a box where the cursor changes at the expected place, but the lower corners give you just 1 pixel to find the right spot, and also outside the corner...annoying

On XFCE (Zorin Lite), this can be adjusted by the Theme you are using. Are you using Zorin Theme or a custom theme?

I am using the default theme, so it's acctually a "bug" in the theme then. Thank you anyway

I am using the default theme, so it's actually a "bug" in the theme then.

I wouldn't call it a bug, really, as much as part of how the XFWM4 window manager works.
In XFWM4, the "grip-area" on the borders is determined by the image size provided in the xfwm theme. It is true that those who make a border size in the theme too small cause it to be harder to grab.
Notably, this can happen in gtk3, as well. The border margin must be set to create the "grip-area" and if the theme maker neglects to do this, you will see the same problem. Actually, it can be worse... In gtk3 that margin can be zero whereas in XFWM4, you still have a minimum 1px size to at least be able to hone in on and grab.

EDIT: I wrote this in a hurry earlier and re-reading it now, I realize I failed to provide the most important piece of information: The theme can be easily modified to increase "grip-area."

EDIT: I wrote this in a hurry earlier and re-reading it now, I realize I failed to provide the most important piece of information: The theme can be easily modified to increase "grip-area."

My husband is using XFCE for years and he always sticks to the default theme. We actually ran a test while ago and came to the conclusion that the easiest one to grip the corner being a default theme.

We actually ran a test while ago and came to the conclusion that the easiest one to grip the corner being a default theme.

This is because most distros ensure that the default theme will cover this well known XFWM4 complaint. The more common time people run into the "no-Grip" problem is third party themes that they download and use.
Many third party themes made by users that try to mimic the appearance of Gnome Themes on XFCE include the fact that Gnome Themes often do not use a border on windows at all. Since in Gnome, it is run strictly by the gtk, the margin property in the css provides the grip area invisibly.
But this needs to be accounted for in the XFWM4 variant by creating a border at least 6px wide (I prefer 10px) that duplicates the appearance of a flat window without visible borders as seen on many mainstream Gnome Themes.

All that said... I did take a look at the Zorin OS Default themes (XFWM) and they all have a 16px by 16px right corner border- which should be more than enough. So I am a little confused about the 1px statement.
To add: I just loaded each Zorin XFWM4 theme, one after another and on each of them, had no trouble locating the Right Corner grip - or left. There was about 16px of grabbable space there.

Personally, I just prefer a border.

Hmm, well it's funny if it's only me who see the 1 pixel (1 by 4 pixels or so) + it's outside the corners, not perfect as the 2 upper corners in a window, so unnecessary difficult to use.

Would you be willing to post a screenshot to help diagnose this? I know that for me, a 1px border drives me up the wall. I'd prefer to not leave you struggling with trying to find the border just to resize.

I don't know how to take a screen shot in Zorin, but anyway, it's a fact that the upper corners are exactly as expected but not the lower ones. If don't see it, then congrats

You can hit the prtscr key on your keyboard to take a snapshot of your screen.

Or, in App Menu, you can search for Screenshooter (xfce)

it's a fact that the upper corners are exactly as expected but not the lower ones. If don't see it, then congrats

I completely believe you - I m trying to help you to resolve it.

Thank you, but the mouse cursor disappears when taking the screen shot with print screen key. Now it worked: 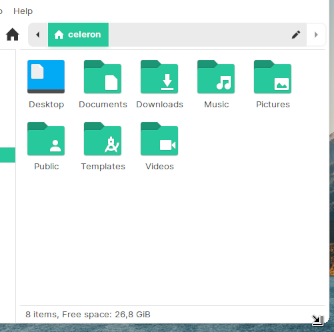 Screenshooter has a setting for "Capture Mouse Pointer."

But the screenshot is to show the borders, where I can Zoom in on the image.