I apologize for the poor choice of words and grammar in advance.

So I have a TP-Link TL-WN821N v4.2 Wifi adapter and unfortunately it doesn't quite work with the out of the box Zorin drivers,the download speed is really slow. After some searching i've found that its a fairly common problem so all I had to do was install a driver manually through the terminal which I did after following some random guide. At the time I didn't really know what I was doing and I still don't. I updated Zorin earlier today and it probably installed another driver which made my Wifi adapter to not even power up, so I thought that I had to reinstall the driver again. I did install it using the following: https://github.com/pvaret/rtl8192cu-fixes.

Later on I came across a command: $ dkms status and I decided to run it which gave the following results 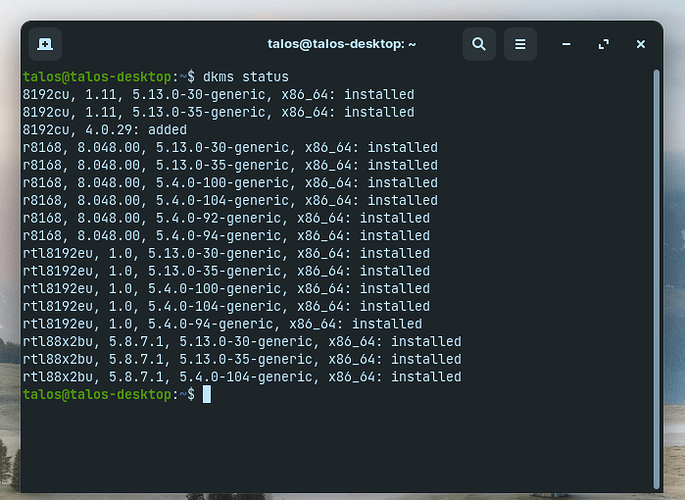 Now I'm pretty sure that it ain't supposed to look like that and I realised that it looks like that because when i first started using OS I installed a bunch of different drivers in the hope that my wifi will start working immediately without restarting the computer hence the mess above.

So my question is, is there a way to clean this up and find which driver actually works best for my case because from what I've gathered the one that is linked above is not the latest but its the one that at least makes my wifi work. Also is there a way to avoid manually installing the driver everytime Zorin updates?

You may be able to use sudo make uninstall run in a terminal opened in the directory that you installed from to remove extra or useless drivers.
Whether make uninstall works or not depends on whether the maintainer had the decency to include the uninstall file.
Otherwise, you will need to seek out and remove the files manually.