Screen became white with pixels floating around after waking from sleep

I locked the pc and left to sleep. 2 hours later I suppose zorin suspended itself or went to sleep (idk the linux term) and after I woke up I turned on my pc to find it having that white background with bunch of random pixels floating around and having green rectangular pixels on bottom (which seems to be zorin taskbar)

When clicking randomly the pixels would move and then come back to original place, and after 10 seconds of random keys hitting i somehow got it to show the taskbar okay and desktop somewhat okay with windows being glitched with that white background and the cursor wasnt visible and i restarted the pc and then it all went away

I would like to find a cause of this and how to fix it if possible, it's not a problem in my monitor displaying the image and I don't know if its gpu driver or some other problem

Did you shutdown and reboot?

And if you can or did reboot, please try sudo apt update & sudo apt upgrade

Please add your screenshot/s to your post using the "Upload" tool
(icon looks like a picture 7th from left in toolbar).
Some helpers are reluctant to click links to 3rd party image sites.

How much ram do you have, what is the graphics card you are using and what are your paging file settings?

Did you shutdown and reboot? 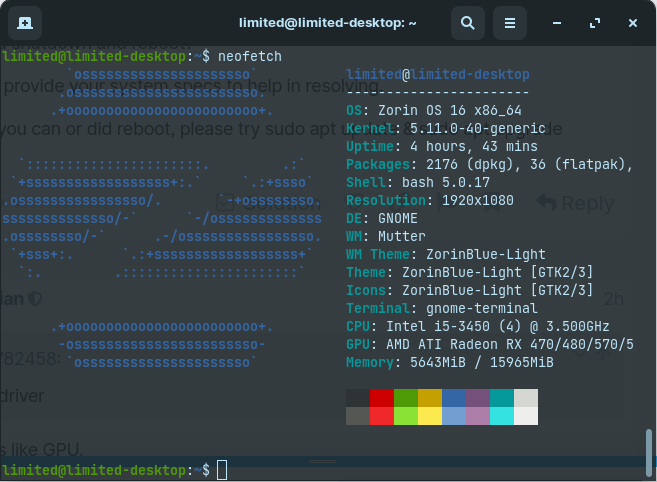 And if you can or did reboot, please try sudo apt update & sudo apt upgrade

what are your paging file settings?

With this, you performed soft reboot.
Please do complete shutdown then restart (hard reboot).

I did it, though for now that white background hasn't appeared again so I don't have anything much to add, but I am wondering what do those special open graphic drivers do? Weren't there graphics drivers already before? I'm not really sure how linux handles gpu drivers

Amd/ati has not the best linux support. Your card has drivers but for ubuntu 20.04 they where not supported. Someone made those drivers to work with 20.04 which zorin is based on.

If the issue is gone please hit solved button