This is the second time that I experience this issue where the system freezes, and I am only able to move the mouse and use the laptop from TTY3+. Restarting Gnome with killall -3 gnome-shell seemingly just restarts gnome in the same "frozen" state, where I can only move the mouse.

Restarting the computer results in the system hanging for a few minutes at the dark screen right after login (when you can only move the mouse around), and then, when it finally logs in, all Extensions are turned off.
Both times this happened after I left my unattended laptop logged in and charging in my room for about an hour or so. Lid was open and Caffeine was on both times, so it didn't go to sleep.

What could be causing this issue?

Here are some screenshots from Logs right after I was able to log in; I am unsure what they mean: 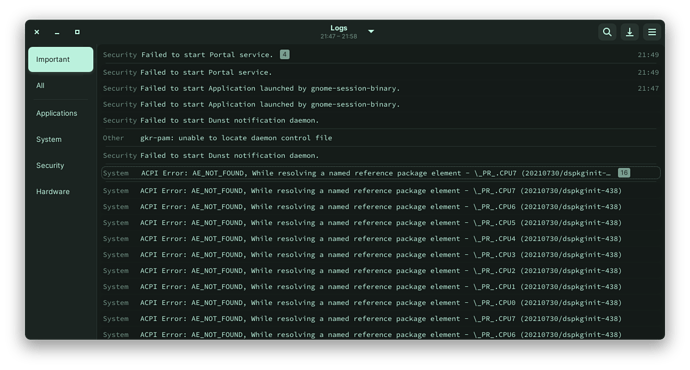 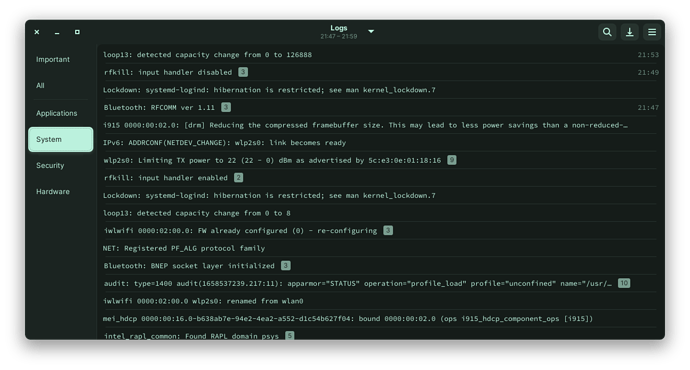 It seems the computer is attempting to hibernate, but it isn't configured or caffeine isn't allowing it.

Can you check settings and ensure hibernate is disabled, as well as the screen saver.

Why would you need the screen on while you're away from you laptop? This can cause burn in (depending on the screen). Unlike a phone, processes will continue to work when the screen is off or displaying a screen saver.

As of a few days ago I installed xscreensaver to try to set it up. Currently I have it disabled and the daemon not running. I believe the first time I had this issue Xscreensaver wasn't installed on the machine though. 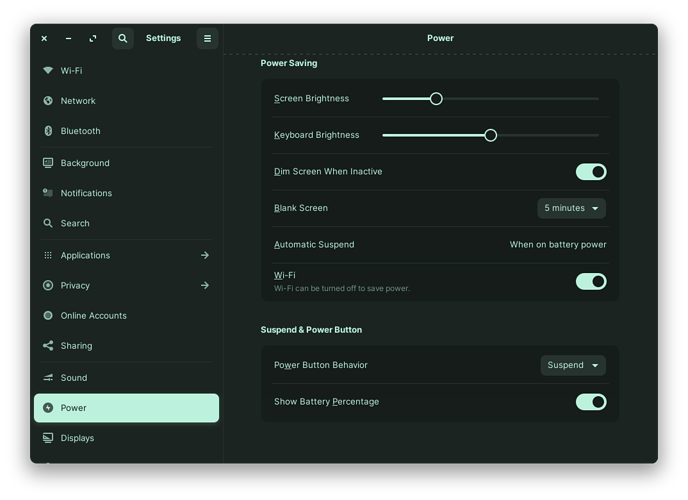 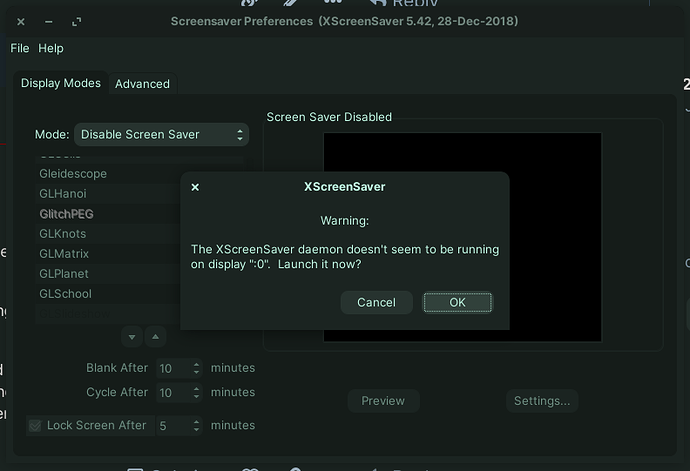 Why would you need the screen on while you're away from you laptop? This can cause burn in (depending on the screen).

I had forgotten caffeine was on. That is why I downloaded xscreensaver in the first place. I wanted to set it up so that pictures from a folder would be displayed statically for a few seconds, but since I couldn't get it to work the way I'd like, I turned it off (set mode to Disable Screen Saver) and that that would be it. Perhaps bc I still had "Lock Screen After" enabled, it still tried to lock the screen regardless of the mode... But I guess for that to have been the cause I must have had the daemon running.

I'd keep the dim/turn off the display and disable Screensaver/suspend/hibernation as well as disable/remove xscreensaver from the auto start apps, then reboot and test. If it freezes again we can explore further options.

Thanks, will do that. Just uninstalled it.

As of a few days ago I installed xscreensaver to try to set it up.

If you installed and want to use xscreensaver (I do) you need to also make sure you uninstall the gnome screensaver.

I have ran xscreensaver for decades with no issues doing it exactly like I just stated. In the help section of xscreensaver there are also guides on how to set it up properly.

If you want to set up xscreensaver to show pictures, it can be easily done and you need to install the additional functions. I always use Synaptic to install programs not the software store. Fire up Synaptic and make sure all the other addon's for xscreensaver are installed, go to GL Slideshow, click on advanced, under image manipulation select choose random image and then hit browse to point it to the file with your images. Done.

Yes, thanks for the reply. I had uninstalled gnome-screensaver. I think the issue was that I had the daemon running along with caffeine on.

I tried doing that with GLSlideshow like you suggest, but I couldn't get the images to be displayed statically in full screen without animations (sadly setting show at least this much image to 100% doesn't work for images in portrait mode and different aspect ratios than my screen). And I also couldn't get it to use GDM as the lock screen.

Not sure exactly what it is you're trying to say here or trying to do. Xscreensaver has a setting to require a password to stop the screen saver and regain access to the desktop. GDM wouldn't have anything to do with that nor would it be able to use GDM as you are not at the lock screen level.

There are variations animations available, you just have to set it to use which one you like best. In the documentation it tells you which ones do what and how to set them.

it will pull the images from whatever file you have them, and will show on the screen. There is a way to make images full screen if you want, I believe they call it clip. But I don't know how it's going to look taking a portrait image and stretching it full screen, even Windows doesn't do that as it would look horrible.

Take the pictures you want to change, redo them to the desired likeness of what you want, save them to a folder and just point the screensaver to that particular folder then. I always kept a separate folder just for screensaver images.

There are more settings in the advanced section as well, not sure if any of those will help what it is you're trying to achieve. Under the preview window click on settings, then you can also click on advanced. There's also a button called documentation that will tell you how to achieve settings.

You can also google it and go to their website, which I just did. BTW, I did notice on their site if you're using Wayland there are issues in using Xscreensaver with it.

I am still using X11 for the time being while Wayland devs figure out how to share the desktop on apps like chrome.

From tinkering with the settings I couldn't get GLSlideshow to behave the way I'd like, I will take a look at the documentation, thanks.

There are variations animations available, you just have to set it to use which one you like best. In the documentation it tells you which ones do what and how to set them.

That is the thing, I don't want ANY animation; just that the images be displayed in Zoom mode (that is, display image in fullscreen while maintaining aspect ratio - same as the default fill behavior when you right click on any image and set it as the wallpaper), couldn't find such option. I often use other screens with different aspect ratios (like TVs, etc) as main screens. Hence why I don't crop them.

Not sure exactly what it is you're trying to say here or trying to do.

Zorin OS has a truly gorgeous lock screen, I'd like to see it instead of the Xscreensaver lock screen, which looks very ugly by most standards.

That is what I was trying to accomplish: have images be displayed in fullscreen (zoom mode) statically, maybe have a fade from one to the next, and lastly see the Zorin lock screen when I need to regain access to the desktop.

A fade world be an animation. There isn't a lock screen/screen saver app around that don't have them. Since you want a specific type of animation, not none, you should use the internet to find an app that has your specifications. Some may even use the gnome lock screen instead of a third party version.