What is the point of workspaces?

I don't really see a point with workspaces. Maybe because I don't use them often? But would it be easier to leave windows that you don't use minimised? Just saying.

Well it's a shame the 'cube' that was present in that original wonderful add-on that used to be present in the early days of Ubuntu, Compiz. You could just Ctrl+ Alt+ left or right cursor key to change workspaces - the point behind it is that you can have different applications open in different workspaces, useful if you haven't got a second monitor - but that was before Windows brought out the Super Key plus right or left key or up down keys to move windows about which GNU/Linux also now uses.

I never used them until I turned on the Workspace Indicator extension. It lets you easily scroll thru them. Also easily get to the desktop (the Desktop button doesn't work very well so I turned it off). It also keeps your taskbar from getting cluttered with minimized apps. 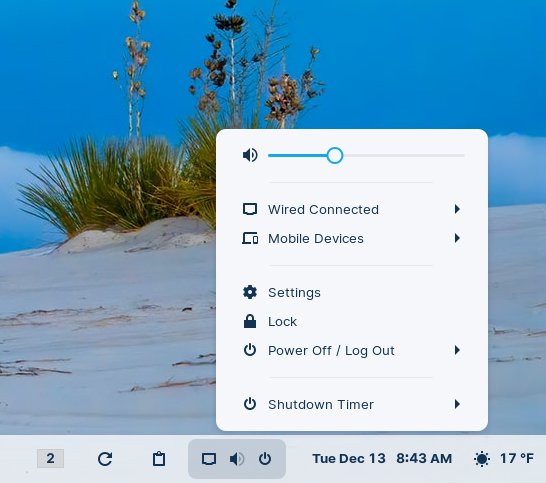 It does that on most distros, the cube made it more fun!

I like using a multi button mouse for most things. Don't like being hunched over a KB. I usually have a vid going half screen on a 27" monitor.

Highly recommend the Logitech Productivity Plus Wireless Mouse for $14 at WM. Has tilt wheel. I use Input Remapper to remap the buttons.

You're right. But if there was a binding of programs to certain desktops, when loading the program, a certain space would open, we could avoid overlapping windows one on the other

I don't use workspaces at all because they only complicate the interface.

It's horses for courses! Or each to their own. Compiz actually made sense when it came to workspaces. It was my favourite items in Zorin 5 Pro.

Maybe there's an alternative to workspaces?

I use them for multi tasking especially on the laptop.

It's useful for filling the whole screen to have no background distractions and also for pairing 2 different documents, viewing something else while doing another thing, stuff like this. This way you don't have to switch between many windows or reopen them. Even using other desktop instances is useful, maybe to categorize your work, for example on a desktop you open documents, on another your browser and on another your media files (perhaps this is useful mostly to who has much to do). Is it possible to separate the screen into more than 2 workspaces? I think that I'd like to set 4 because I often open Files Manager, my TXT and my Rhythmbox playlist so placing these 3 easily on 3 workspaces would be great.