As the title says!

I tried to install Zorin 16 Lite alongside Windows 11 Pro and couldn't! Every try, been on different Laptops and Netbooks, will end up in the Message that an available OS could not be found by the Zorin 16 Lite installer! That was tried on seven different older Netbooks and Laptops of the Brand Acer, Asus, Dell, HP, and MSI. None of those machines have TPM and/or UEFI/Secure Boot, while all have min. 4GB of Memory. And it also applies to either normal HDDs or SSD's too.

Any way around that problem, means Windows 11 Pro installed as first/main OS while Zorin is the second OS?

Edit: Sorry, forget to mention that on all of the used machines, Zorin 16 Core is working alongside Windows 11 Pro very well!

Have you tried running

No, and I do believe for to run that Zorin (Linuz) needs to be installed already!

I simply could NOT install Zorin 16 LITE alongside Windows 11 Pro, the Zorin Installer did NOT find another OS on the machines!

I simply need to have both OS running side by side! 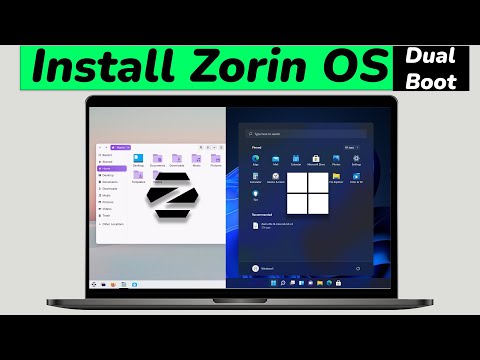 To make it clear again: the Zorin Lite Installer did NOT see any other OS on the HDD/SSD, and to carry on with the Zorin OS 16 Lit installation will disable the Windows 11 Pro Startup by deleting the relevant entries.

I didn't try the manual Partitioning etc., as shown in that video yet, I'll try it later on as I need some time for that. On those older machines, such effort will need quite a bit of time, a time I really do not have this time before February.

So, what I need is a working way to install Zorin 16 OS Lite alongside a working Windows 11 Pro in a simple way! It's not for my own machines, it's for the machines of my customers, which goes into the hundreds!

The question here goes to the developer of Zorin OS 16 Lite how to solve that problem in a very easy way?!

Thanks for any really working version to install Zorin OS 16 Lite alongside Windows 11 Pro.

Would you mind confirming the checksum ?

You can also configure dual-boot by partitioning manually. It is not necessary to use the "Install alongside Operating System XYZ" option. I always use manual partitioning.

Which checksum? the one of the Zorin OS 16 Lite ISO?
Thanks.

I'll need it a easy as possible because my Customers should do the work on their own! They wouldn't pay me for to do that work, except a very few of more than four hundred!

And really, the disability for to use the Zorin Lite own Installer to install Zorin OS 16 Lite alongside Windows 11 pro, seems to be a bug of the Zorin Lite Installer! For the Core version, it just works fine!

Which checksum? the one of the Zorin OS 16 Lite ISO?

Make sure you check the SHA256 Checksum of downloaded file (particularly if downloaded from 3rd party site), against that published on the Zorin website. You can verify whether the file has been downloaded correctly without corruption by verifying that its sha256 checksum matches the one listed after pressing the “View sha256 checksums” button on this page: Download - Zorin OS To verify the checksum, we would recommend you to use an app called QuickHash, which can be downloaded from here: http…

That is always done by any downloads which have Checksums available, so for the Zorin OSes too! All of those are correct!

If the "Install Zorin OS alongside Windows" option does not appear for you while installing Zorin OS, please select the "Something else" option to open the manual partitioner instead. We would recommend you to follow this guide on how to use this option (the instructions should be identical as Zorin OS is based on Ubuntu):

How to Install Ubuntu Alongside With Windows in Dual-Boot

This tutorial will guide you on how to perform the installation of Ubuntu alongside machines that come pre-installed with Windows 10 or 8 in dual-boot.

Please note that the installer software is the same between all editions of Zorin OS, so the instructions should be the same for Zorin OS 16 Lite and Core.

If the installer doesn't recognize your computer's built-in hard drive, it appears that the computer may have been set to hibernate instead of turn off completely, or is using "Fast Startup" (which is a default setting on some Windows 11 computers). Please make sure to disable this option before booting the Zorin OS Installation USB by following this guide:
https://www.makeuseof.com/windows-11-turn-on-or-off-fast-startup/

It's not that the installer to install Zorin alongside Windows did not start! It will start just end up in telling that there isn't another OS installed on that HDD!
In Zorin Core, there is no problem with that, that is just related to Zorin LITE only!

Just for you to know, I also used other Distros of Linux, like Peppermint and others, which support the install alongside Windows also using the XCFE Desktop, and it worked well.

That is why I think there is maybe a kind of bug in Zorin Lite.

Regarding the 'manual' installation as suggested, I could do that on my own, but for a few hundred customers, which (they themselves or their boss/company) would not pay me for that. Those are 'simple' Computer Users, working with Windows only till now!

Can anyone please say, which version of GRUB does Zorin 16 lite use?
I found this in an IT's FOSS article:

Grub bootloader version 2.06 but there is a problem with it. It has os-prober feature disabled by default.
This means that if you are on a dual boot system, Grub won’t probe for other operating systems and thus it won’t list Windows (or other OS) in Grub.

Regarding the 'manual' installation as suggested, I could do that on my own, but for a few hundred customers, which (they themselves or their boss/company) would not pay me for that. Those are 'simple' Computer Users, working with Windows only till now!

I do not have the time to introduce that many users for NOTHING about the "How too"! And, it's not any fun too!