Hi there. I am a new user moving from windows.
1)I was under the impression that Zorin 16 was to be much faster operating system but so far have not seen such. When looking the store when I click on and icon it takes several seconds for the next page to load with the graphics. Also when trying to scroll the screen freezes for a few seconds before reacting.
2) I just tried to add GDebi package. I clicked on the install button and nothing happened for 2 minutes. When I clicked on the store it shows that it was installed and when clicked on it asks to launch but pressing the launch button nothing. I tried to remove the package to try and reinstall and get an error "unable to remove "GDebi package installer"; no packages to remove.
i know that I am not up to speed with the os as of yet but simple commands should give you the results you expect.

I've had similar issues. In addition, I get this if the store is idle too long and you try to get updates (killing the software process from the system monitor and relaunching software corrects the issue): 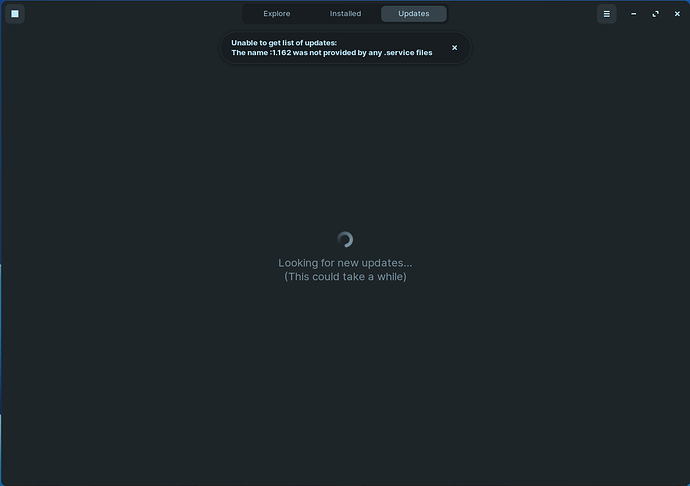 When looking the store when I click on and icon it takes several seconds for the next page to load with the graphics.

For users migrating to Linux from Windows, a sense of familiarity can help.
The Gnome-Software application, or Software seems the most suited toward showing some of that familiarity.
But personally, I like to see it as a stepping stone.

It may not be enough that you are impressed by that application, but is enough that you can find your way around while learning a new operating system.
I do not use Gnome-Software and stopped using it not too long after leaving Windows behind.

For a GUI package manager, I prefer Synaptic. You can install it from terminal with:

When you launch Synaptic, you can see why the default is Gnome-Software. Gnome-Software has a simple interface. With Synaptic, you are immediately bombarded with decisions that you are uncertain of. Which... brings us back to why I see Gnome-Software as a stepping stone.
It will at least usually get the job done, while a person gets settled into a new system and learns how to use the tools, like Synaptic.

With Synaptic, you can do almost anything. Feature rich and fully capable, you can install or remove Linux Kernels, any application, lock packages down, filter results, change servers or specify which repositories you want to use.
Gnome-Software is - point and click and hope it works.

GDebi is pretty good. It is a very small application, it does one thing and does it well. I install it from terminal with

And never had any problem.

Part of the problem with store isn't zorin, it's the internet and the server response time. It may have been being used by multiple people at once. I personally don't use the store because of its constant recommendations of flatpak and snap packages (both of which i removed).

If you search any software you want to install in a search engine, type

after it and you'll get tutorials to install that software. If it says snap or flatpak, ignore those. If it says. Deb or asks to add a repository or uses apt-get... install it. This will save you many headaches in the future and they will update with your software updater app if you don't want to do it in the terminal.

As much work is put into the software store, it's still not what it could be. Synaptic and terminal/.deb are the best way to install software.

Thank you for your detailed reply. I will try Synaptic. I finally got gdebi loaded by using get update and then installing gdebi from there.

I know that I have a long way to go learning the ins and outs of this system. I was just disappointed that this was not as windows familiar as I thought it was.
I can see that if someone from windows moves over that this would give a user that just wants to use the internet and have a somewhat familiar feel to windows this would work quite well. I just did not realize that it took several more steps to try and install programs and not just click download and then click install as in windows but I guess that if I wanted something that was exactly like windows I would use windows which has its own problems.

It looks to me that I have a lot of searching to do and a lot of reading up on how to work with this system and what programs to work with. Again thank you and 337harvey for your help and explanations.

Thank you for your help.

If you had switched to Mac OS, you would have such a learning curve, too. I remember when I first migrated to Linux from Windows, all I did was complain. I wanted to go back to Windows several times.
I think that this is inevitable. At least for some Windows users. The only way to make a Linux Distro seem familiar enough would be to make it Windows.

Once I got my feet under me and learning was able to build upon what I learned the previous day - things really took off. The efficiency, speed and power of using a Linux system began to have its effect. Not to mention the User Control.
On Windows, I often felt out of control. If I returned to Windows, now, taking what I learned on Linux with me, I probably would have a much easier time on Windows. But starting out on Windows, knowing nothing about computers, Windows is geared to keep me there. Keep me ignorant.

The most important thing is to keep your Confidence up. When you get lost or stuck, always remember, "You got this." You can do it. Windows likes to say, "We'll take care of that for you..." And give you a three hour spinning circle.
Believe in yourself, first.

As @337harvey pointed out (Something I did not think of), the Software Store relies on net access for it to perform. I ma not a Windows hater, I just am troubled by some of its more glaring flaws. This is true of Linux, as well. Linux has its flaws, too.
At least as a Linux user, you can do more to address them.