I set up my husband's computer with Zorin 16.1 core. I installed Chrome and set a different picture for desktop. It worked great for about a week, then BAM! My husband signed in with his password, and he tried to go into Chrome, nothing. I tried to go in Chrome, nothing, Signed out and signed in again. Nothing not even fire fox would work. I left if for a few hours went back and signed in again and now the desktop picture I set up worked, but the software said Cinnamon. Now he has a tablet looking interface but not the desktop (windows look alike). How do I get the Windows look alike back with task bar on bottom again? PS with this set up I can get into Chrome. Don't know what happened?

Cinnamon is not a D.E. that comes with Zorin OS, nor is it in the Zorin Repositories.
You must have installed it.

Don't know what happened. So I turned off screen lock (in privacy settings) checked Zorin Appearance and selected desktop (window's look alike) and nothing happened. So I "restarted" the computer and it is working again. So problem fixed. Any other solutions or suggestions as to what happened?

No. Not sure why I saw that. I definitely didn't install it. Unless my husband did by accident (he is not computer literate). I have heard of Cinnamon, but I don't even know what it is.

I have heard of Cinnamon, but I don't even know what it is.

I use it, so I am not knocking it.

Cinnamon is a Desktop Environment in the same way XFCE (Zorin OS Lite) is, or Gnome (Zorin Core.)
Or the interactive environment on Windows, or Mac.
While Windows and Mac come with only one Proprietary environment, Linux offers Many Environments that the user can choose to use, based on their preferences.

Cinnamon and XFCE are Full-Fleshed out Environments, great for new users to Linux.

But if it is not there by your intent; it somehow got installed. Possibly due to following vague and only-sometimes helpful guides on the internet.

I would hesitate to assume that Cinnamon was Fully installed if it was not done by your intent. So giving tips on navigating it May Not Work...
But... if you Log Out, you should be able to either see a menubar at the top with buttons on the right (lightDM)
OR
A Log in window with no top bar at all.

IF you see the topbar, that is LightDM (Display manager) and it comes with Zorin Lite and it comes with Cinnamon.
Click the Desktop Choose on the upper right on that menubar. You can then select Zorin Desktop and that will log you in to the familiar Zorin desktop.
IF you see just a log in window, select "other..." and look for the Gear Icon. Click the gear icon and select the Zorin Desktop

Thank you. I don't think Cinnamon is installed, but could that be the name of one of the Zorin Appearance layouts? For example there is a Mac type layout, and a WIndows type layout. Perhaps I had the Cinnamon type layout? I had four large button on left, and a bar on the right with the desktop picture on it. When I clicked on the bottom button on left it gave me the apps in icon appearance. Re-selecting Windows layout and restarting the computer seemed to fix the problem.

Perhaps I had the Cinnamon type layout?

That's a good point and a good question... Perhaps a Zorin OS Core user can verify that one.
I use Zorin OS Lite.

There is a layout like that in Zorin Pro 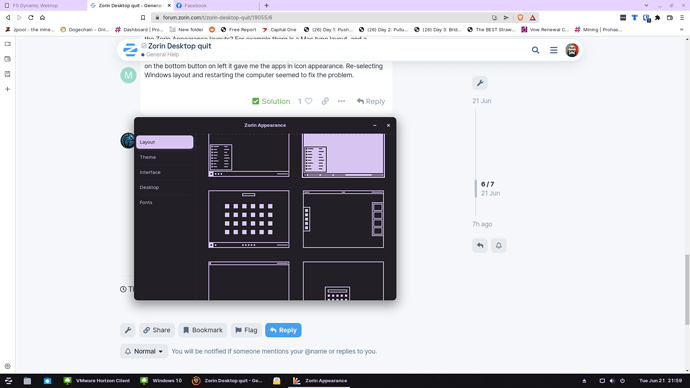 Thank you Sean. Well, I did not install Cinnamon or Pro. I installed 16.1 Core. I don't know why I saw that "Cinnamon". The layout my computer switched to was 2nd down from the top on the right as on your screen shot. I believe someone on YouTube said that was the Gnome layout.

It's just a layout, when you choose a layout it will change the wallpaper too, that layout makes it look like the classic Ubuntu gnome theme. In the future you can goto Menu > Zorin Appearance and you will see the layout and layout themes available