Do you remember? That was 3 months ago. You seemed surprised it was even possible.

I used Termux, over a year ago ON That build, and in order to make certain things work. What surprised me was that you said you had installed an operating system ON Termux.

The instructions stated the fact that I did this with Qemu. You probably too. It is now possible to use the Android kernel without Qemu and, for example, to run Ubuntu but not yet Zorin OS.

It may be that I did.
What I remember, aside from it taking me a week to get it done (lol) was that I moved the .iso files onto a separate disk, then installed compatibility layers onto the phone, first.
Then I moved the install onto the phone from the separate disk.
It was installed, but a few things were not working properly - which is when I learned about Termux and installed it- which I then used to correct what wasn't working.
I still have the phone and Zorin is still installed on it. The battery has been dead for at least ten months now... But I can try booting it up and exploring.

In the meantime, though, we stray from the point. And that point is that you can configure the layouts you want without a need for the Zorin OS app to do it.
I actually prefer to, since I can save them and apply them at need. Whereas with Zorin Appearance Layouts on XFCE, changing layout immediately erases all record of your current configuration.

I can try it. But I can't change the language because I can't reboot. Then it's harder to fight your way through.

But still not practical. Was it that slow for you too?

No... not at all. It powered right on and worked fine.
Honestly, it worked almost as well as my full-fledged tablet computer does.
I used Zorin OS 12.

Seriously?!? How? The s6 should be slower than mine low-budget device. That sounds absolutely fine.

Well... we are discussing things well out side of ordinary, here...

Explain exactly how you did it. If there's a way to run Zorin OS on an Android at a decent speed, I need to know. I've been working on this for 2 months. Imagine using the smartphone as a PC with, for example, Samsung DeX, running UWP applications, Linux applications with GUI, computer games and much much more and all for noobs as me.

If all of this actually works at a speed close to that typical of smartphones, write instructions!

Explain exactly how you did it.

I do not remember exactly how I did it.
In order to create an instruction guide on it, I would need to get my phone, power it on, and spend a lot of time dissecting all the packages and configuration (probably jog my memory here and there)...
Then repeat the steps to test it. Then write the guide.
I really would rather not.
Aside from being a large drain on my time when I have little to spare, it also would set me up for a lot of troubleshooting any user runs into issues with. Which could be numerous... While I had installed and played with it, I did not actively regularly use it and really run the paces. I did it for the novelty... But as far as use goes... It was tedious controlling the tiny itty bitty mouse and the Phone Keyboard cutting into the screen when in use... I cannot devote my time to becoming a Maintainer of it.

For some, a simpler method would be Debian noroot available in the Android Play Store.

Debian noroot is not for noobs. This is something completely different. That's why many like to use Zorin OS. It's user friendly.

It's a lot simpler than what I did!

Did you have to [Root] your S6 for this?

Yes and that was one of the hardest things to figure out how to do. I then needed to install chroot.

I see... I once just swapped a recovery and then the kernel wouldn't boot Android anymore. Instead of simply blocking the recovery if Samsung sees it as malware, in order to at least continue to use the OS anyway...

PRoot has been around since 2019. With PRoot can you the root file system create this anywhere, for example in /data/data/com.termux. It's a replacement for chroot if you can't root. Chroot also needs an ARM OS on an ARM device, right? The only problem for me is getting Zorin on ARM but you seem to have already made it. The biggest hurdle for users has vanished into thin air thanks to Xeffyr (developer of PRoot).

I am not the right person to ask. I was playing around with the challenge at one point, with a lot of trial and error. Much of the time, I was looking up instructions with no idea what I was doing.
And it was fun at times... and rewarding in the end... But was a novelty action, not a practical one. And not one that I care to repeat.

I just need the ARM version which you must have probably used. I can probably manage the rest without any major difficulties and can then write the of me usual simple instructions with embedded workarounds already installed if problems arise.

I just need the ARM version which you must have probably used.

There is currently no ARM version of Zorin OS.

However, x64 systems can be installed on ARM; it's just very tricky. Which is why I have said all of the things I have said above.

Then I'll try to find out.

If you’ve ever tried to download an app for sideloading on your Android phone, then you know how confusing it can be. Often there are several versions of the same app designed for various device specs—so how do you know which one is the right one? 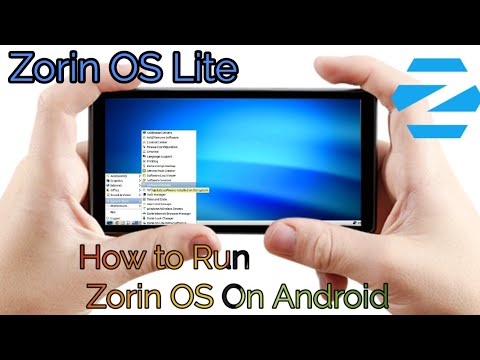 Zorin OS is emulated here. This is impractical to use. Except maybe with an armv9 processor. Who knows... An instruction I have already written about it.