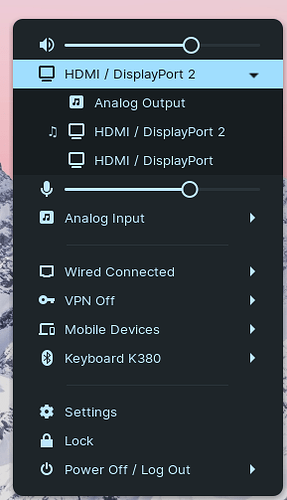 Switching audio inputs/outputs is a pain in Gnome because everytime you want to do it, you have to open settings.
I think Zorin could help their users a lot by just having this shell extension and letting people switch audio devices from the quick settings. The extension works great in Zorin, no issues or bugs.
Here's the link to the extension: Sound Input & Output Device Chooser - GNOME Shell Extensions

You can thank Gnome for that....

The problem is that every time Gnome updates, it's like the devs at Gnome go out their way to break extensions. So doing that in the long run would cause more issues than it would be worth.

So enjoy that extension while it works...

Just like themes, Gnome Devs have often vocalized a distaste for Gnome-Extensions. Which is very interesting... Since they exist because independent devs seek to restore what Gnome removes.
This usually means that they seem to break after updates...
Gives such a Microsoft feel, doesn't it?

@rootuser
It is a good suggestion, nonetheless. Zorin OS comes with quite a few extensions for Gnome, indeed the ZorinGroup did a very good job of making Gnome usable.

It is a good suggestion, nonetheless. Zorin OS comes with quite a few extensions for Gnome, indeed the ZorinGroup did a very good job of making Gnome usable.

Yes, I noticed that Zorin already came with extensions and forks of extensions like GSConnect, so I thought Zorin team could consider including this as well. They've done a great job of maintaining the feature set.