Hi, Could anyone please help. I was running Zorin 15.3 with no errors. Due to the support being withdrawn I opted to upgrade to 16.2. I used the new option i.e. it reformatted the disk and installed only 16.2. Since then when I boot the system it goes direct to GRUB, the only way I can get the laptop to boot to Zorin is to go into the BIOS and boot from the notebook hard drive.

In summary there should be one clean 16.2 install on the machine which is an HP Elitebook laptop. I have never had any previous issues with installing Zorin and I have repeated the installation to make sure it is not something I did wrong during installation

Not sure if this helps but after some research on the Internet if I go into grub and issue the set command the root =hd0, msdos1

Any help would be much appreciated. Thanks

In the bios, disable tpm. Also, change the boot order so you boot right into zorin. I'm not sure why, but it sounds like there are two EFI partitions. The old 15.3 partition wasn't removed and still had grub, the other is the new partition created by 16.2.

When in Zorin, open disks and take a look at the partitions. A screen shot would be helpful.

Thank you 337harvey for helping me. I have attached a screenshot as you suggested. I'm not sure how to change the boot order to boot directly into Zorin but I will have a go once you have chance to check the screenshot. Many thanks for taking the time to help 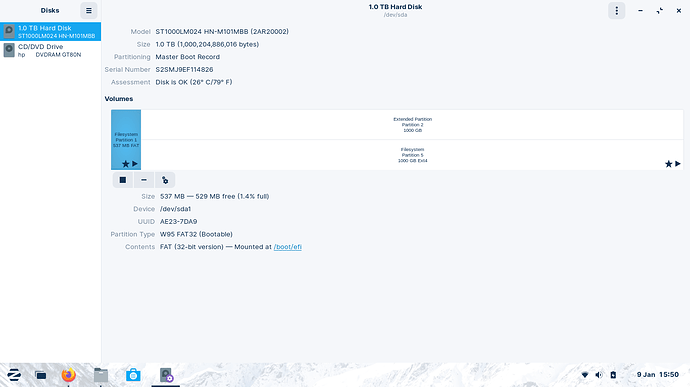 It appears as though you used the alongside an existing OS method for installation. The drive is set up for MBR not GPT, the recommended format for Zorin 16.2.

There are many tutorials on the web that convert the drive from MBR to GPT, but only Windows has a built in tool, it can be run from an image, that covers the drive (supposedly without data loss). I have never used it so cannot comment on it.

The recommended way in Linux is to use dd and wipe the drive, making backups and restoring after completion. This may be your issue (extended partitions aren't meant to boot).

After converting the drive, if you want to keep the 15.3 installation, you can use the something else method, modifying the partitions as recommended in [HOW TO] Partition & Install Zorin 16, otherwise, backup the home directory and you can use the [HOW TO] Easily reinstall programs when Reinstalling Zorin

Hi 337harvey, many thanks for the help, what i did was opened a terminal window and issued the following command

I then hit "w" and confirmed this with "y"

the machine now boots as expected and not into GRUB.

I still have some "IMA errors communicating with TPM chip" during the first stages of booting but I can live with this as it does not seem to affect the thing actually working.