Amazing apps everyone should try

I know I have posted what are your favorite applications prior to this and that went over a little bit. What I am asking for today if you have time is which applications you really like and work well.

I don't know what all the applications out there do or even what to search for because I am not sure what I am looking for. I do know that I would like to hear of some apps that maybe you just find amazing or just things you think people should take a look at just to know they exist.

Right now on my machine I have most of the bases covered for what I use a machine for. But what I want to know is what am I missing out on. It could be anything.

I use the following and they work really well

firefox
thunderbird
flock
telegram
teamviewer
mumble
oh and if you are looking for a great mumble server hosting company. WOW.. BisectHosting is amazing! The console is amazing. The connections are amazing. I was totally blown away
MEGA
Synaptic
VirtualBOX
Zorin Connect - AMAZING

So if there is anything out there, fun or awesome or does something really cool or if just needs to be tried. Like Termius for SFTP and other things (unfortunately I can't get it to work) please let me know.

Just tried it... would be nice to be able to stop the animation. Otherwise I'll be measuring amount of time wasted by this in years

Just tried it... would be nice to be able to stop the animation.

SL animation? It should only run once...

SoftMaker Office 2021 (paid version, not NX rental), free version is FreeOffice.
LibreOffice for bits that SoftMaker can't handle - font spacing in Pts as opposed to % in TextMaker 2021, plus image compression to reduce document size without loss of image quality.
Okular - best pdf viewer, period. Can also be used as a Presentation Viewer too. There is just so much more to Okular than meets the eye.
pdf arranger - move pages about, delete unneeded pages.
pdftk - pdftoolkit - command line tool to repair corrupt pdfs.
ocrmypdf - command line tool to apply ocr to pdfs in order to extract text.
Calibre - convert documents to .epub files for many formats/platforms, e.g., Kindle, Mobi, Apple etc. Okular can read .epub's too!
LIOS (Linux Intelligent OCR Software) - used extensively whilst working from home to extract text from pdfs after using ocrmypdf.
pdfstudio Pro from Qoppa Software - one of the view PDF providers that still supports GNU/Linux and only a fifth the cost of Adobe Acrobat Suite and without the need to subscribe or pay for those extra little elements that Adobe likes you to buy when it is all included in pdf Studio Pro 2021.
VueScan (you can try a demo of this which leaves a watermark) - got an issue with your Scanner? I have a Canon Pixma TS8151. The Linux software provided by Canon is minimal to say the least. VueScan gives you full control. I purchased the Pro version at £79.
A user commented they had even been able to revive a 30 year old Epson Scanner to work with Windows 10. There are still some Scanners that will not work with it, like the Lide 600F attached to m'lady's machine which needs Windows 7 on another Partition to use.
Evolution - best for Enterprise use and can be configured to use Outlook365 accounts if needs be - and it bleeps at you when you receive a message where Outlook365 web app failed to do when I was working.
When I repaired computers I used GNUCash to keep track of finances.

Wow, that is a lot of PDF stuff. Thanks for all the information. I wish more people would join in..

I don't want to go off topic, but this is something that has bothered me since the dawn of time with linux. I am hoping the responses here are for ZORIN linux only. I should have been more specific to the distro rather then linux as a whole.

How are you suppose to know what to choose? 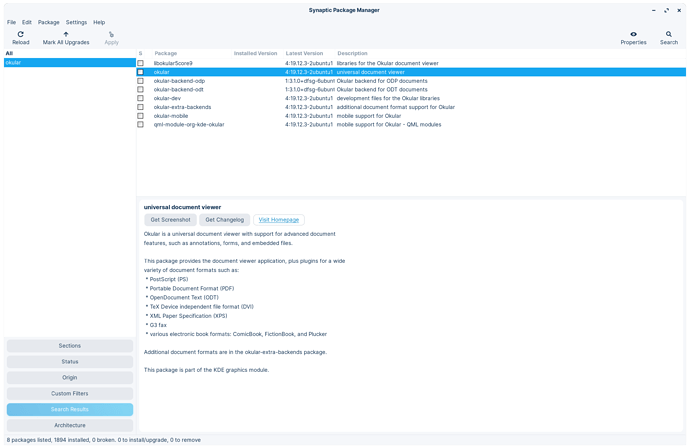 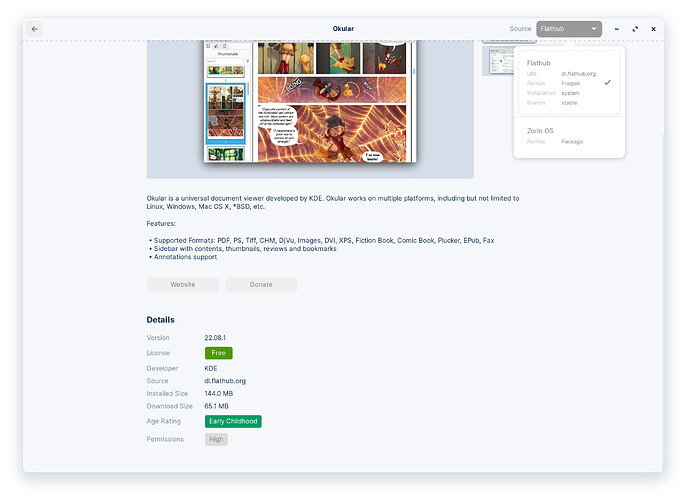 if you choose OKULAR from synaptic it wants to install like 300 other things. If you choose it from within Zorin, nicely you see none of that but you arent even sure if it is the best version or are you suppose to download it from the website based on 20.04 ubuntu or some other number for debian.

Also, I understand that there are repositories, but how do you know if you should choose the zorin version or the flat version vs everything just discussed in the paragraph above. I think what gets tiring is the guessing game. The trial and error stuff. Maybe not tiring but, someone should really put together a realtime/updated list of which is the best options for ZORIN at its current state. Things that are updated and actually work.

Interestingly, before I moved to Devuan from FerenOS the latter used Flatpak install (I think) and only on FerenOS could I get speech to work which used the 'flyte' speech engine. There are other useful backends for PowerPoint so that you can acutually view PowerPoints in Presentation format.
Windows users can use SAPI voices for people with low/no vision.
Just installed the Synaptic Version on my VM of Zorin and it is 1.9. from the store it is 1.10. The current version is 22.08! My Devuan 3.1.1 only has 1.3.2 and no speech in the tools option.

The most surprising thing was that Inkscape was much faster than the Windows version, despite the same hardware.

I love how seemless the Nextcloud integration is at least on Zorin GNOME.

I happily use QOwnNotes for notes and the standard Evolution products like mail, contacts, calendar and to-do to sync it with my Nextcloud-Pi-server.

Floccus as a browser extension keeps your bookmarks synced to Nextcloud.

And not to forget Zorin Connect! That all made me ditch Windows with so much joy.

I haven't found an easy-to-use but fancy looking IDE yet. At the moment I am stuck with Builder. Not a fan of Sublime Text or Notepad Next... Any recommendations? Brackets seems to be quite out-of-date in the software store.

Brackets seems to be quite out-of-date in the software store.

If a package is in the Software Store... It is not out of date.
It is current and maintained.
This is not politics. Only packaging that has reached EOL is considered Out of Date.

Just because a maintainer has released a Beta of the next version, does not mean that the previous Stable package is out of date. To suggest that this is the case is misleading to new users and can be harmful.

I really should not have to repeatedly address this misnomer so frequently.

Sorry for using the wrong term and thanks for clarifying. In a world full of noobs it is always tedious to be the one pointing out the mistakes that will lead to wrong assumptions in the future. But don't worry - Now I will forever remember

The fun part of this is that I initially did not pay attention to who said that line and mistook your identity for another poster that has called anything that isn't the absolute latest package as "out of date" frequently - which is why my reaction was that strong.
Now, I see my error there and think "I could have toned that down."
heh

No need to be apologetic. Wrong terms deserve to be corrected. Otherwise we will all just end up as sheep

Brackets is in fact discontinued, officially since September 2021 (although latest release seems to be dated on April, 2020).

However, there's a community fork under the same name that still lives to this day. I really liked Brackets until I discovered Atom, which sadly was recently put into maintenance mode in favor of VSCode since they are not both owned by Microsoft.

The founder of Atom has already started working on a new editor written in Rust, not yet released as far as I know, but looks very promising.

Another code editor that I really like is Lite. Written in C and leveraging Lua for extended functionality. Very efficient and snappy, though it's currently considered feature complete by the author and most of the development is done by contributors. In fact there's a popular fork that continues the development to add more core functionality, very much active at the moment. Both have a lot of plugins and themes.

And of course, there's the all time winner VSCode. I personally use VSCodium instead which is a fork without the default telemetry*.

Recently, I've started using Lunar Vim, a flavor of Neovim, in addition to VSCodium. Mainly because of performance, as sometimes with VSCodium the fans run a little too much while working in projects with many definitions to look up. Not to mention the RAM usage, which admittedly is not as bad as many people like to point out, but still significant. Also, vim is much more efficient once you get used to it, although it's certainly taking me some time... that's why I still use both depending on my mood.

*Actually not everything is disabled by default. Also, some plugins still require telemetry to work although I haven't encountered any at the moment.