Hello all,
Hope you are well. I am having a problem where some apps are listed to be updated but when i hit update they never finish. It has been like this for days. I have reinstalled the software center and they are still there. One app I dont even have or knew i had on my computer (Whatsapp). Does anyone know how to fix this? See image below. 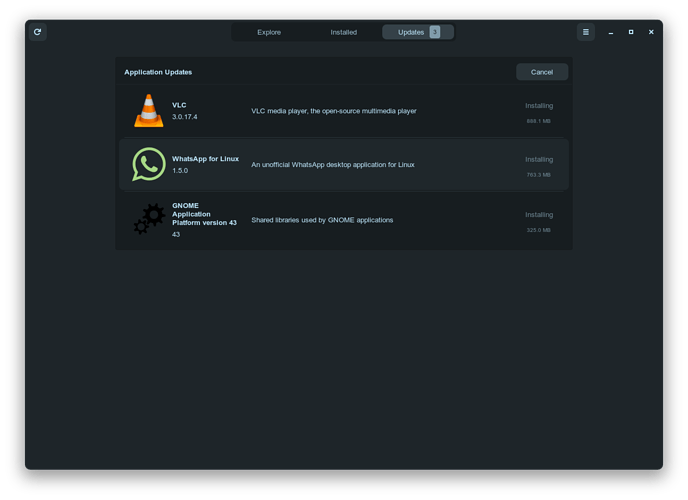 Thanks for any help!!

Those look like Flatpak apps - can you please verify if so?

Thank you for the help!

@Michel I did the command with no errors but opened up software center and the apps are still there,

@Aravisian How do i verify if they are flatpack? What would be the place to look?

Thank you for your help

@Aravisian How do i verify if they are flatpack? What would be the place to look?

Under Installed, look for Whatsapp and VLC and check Source.

Alternatively, you can check in terminal what Flatpak apps you have:

@Aravisian VLC and Whatsapp are Flathub.. so yes flatpack. the gnome platform??? not sure abut that one.
Thanks

I already know that one is flatpak.

In terminal, can you run

And see if that updates them successfully?

That did it thank you so much @Aravisian !!!

This is a bug with gnome-software that has been reported and reviewed by the Gnome Devs.
At least you know now how to unstick that if it gets stuck again.

Yep making a note of it now thank you very much. Any idea why software center keeps going haywire?

What is great about Linux and FOSS is that Open Source allows users to independently review the code.

Now, while the Gnome Foundation Developers have voiced a desire to pull out of the gnu general free license (since it conflicts with their uh... core mission and values...), they have not done so yet.
This is partly to do with the Stakeholders for Gnome being deadset against such a move.

This means that we can, currently, still independently review the Free Open Source Code.
Some interesting things can come to light when a user should compare the code for Gnome Software pre Gnome 40 and post Gnome 40.

You see, unable to pull out of the Gnu License agreement, Gnome Foundation developed Libadwaita. This... also... upset the stakeholders for Gnome.
But it did not upset enough of them for Gnome to stop.
Previously, in some years past, Gnome Foundation signed a pledge to stop breaking independent appearance using Adwaita fixes when the stakeholders for Gnome stepped in to stop their antics.
This took effect with the release of GTK 3.20
But they started work on LibAdwaita - a means of locking users and developers alike in, which can create a proprietary situation where Distros (Like Zorin OS) and developers must seek permission from Gnome in order to alter ui appearance.
Solus and Canonical protested heavily, but are only two of the stakeholders. Solus promised to create a desktop environment alternative to Gnome fully.
Gnome continues to force LibAdwaita however and the damage is continuing to be done.

Which, as this affects me, is where my interest comes in.
And in comparing the code pre and post Gnome 40 - something becomes rather disturbingly clear. Fixes pre that could have been implemented simply weren't. They were closed with a "Wontfix" tag.
But they were included post Gnome 40 ... Which includes LibAdwaita.
It is important to note that LibAdwaita has zero effect on the bugs in Gnome- Software.
But Gnome Software is one of Gnomes Primary Core Applications.
What this does do, however, is encourage Linux users to "upgrade" to the version that is governed by LibAdwaita.
Sound a whole lot like Microsoft?

The most fascinating part is that many bugs were not fixed by repairing code or adding code but by removing code.

I realize, of course, that it is impolitic for me to go into such graphic detail publicly on the forum. Zorin OS offers Gnome D.E. in its Core version. And probably will offer Gnome 4-+ in Zorin OS 17.
Even so - I have my principles. My ethics.
What Gnome has been doing these past ten years and is doing now... Is amoral, unethical and Just Plain Wrong.
It is unhealthy for FOSS, damaging to what makes Linux great, removes the diversity and user control and choice and empowerment that Linux offers... In order to appease Gnome Foundations desire to place their Brand Image First, to set themselves as the Dominant desktop environment... the only desktop Environment on Linux.
Just
Like
Microsoft.
And... I choose to not be silent.

Yes, I do have some idea why Gnome is so buggy. I have some idea why it keeps getting promoted as Polished, Elegant and Refined, in spite of the massive bug reports, Breakable Gnome Extensions required to restore functionality (Which Gnome Devs have repeatedly voiced a desire to remove the ability for Independent Developers to add Extensions), broken theming and unpolished UI design that cuts widgets into each other, overlaps with each other or expands to fill gaps that should not be there. I know very well how Adwaita hides these flaws by forcing flat overlays, why libadwaita removes toolbars entirely, scrollbar - steppers and menubars since theming them brings these unpolished flaws into the glaring light for anyone to see.

Everytime I read another article promoting Gnome 40, I think of Padme Amidala saying, "So this is how Liberty dies. To thunderous applause."

Wow. I did not have any clue such a thing is going on. I agree with your points, and will take every article promoting gnome with a grain of salt. One of the reasons why i switched from windows to Linux was so that Microsoft did not control every part of my computing experience, and try to sell me with ads.

I always thought Gnome was the best thing going on Linux, but maybe others will work better. Everything today is about locking users into a controlled cycle, your car being repaired by the manufacturer only, all designed to guarantee a recurring revenue cycle. I think more people need to wake up to the things being done nad revolt now or it will be too late in the future.

Everything today is about locking users into a controlled cycle, your car being repaired by the manufacturer only

I am not a Computer Guru.
Actually, I am a Mechanic.
And I can vouch for the authenticity of this perception... Heavily.
Automakers have been resorting to a large array of tricks to make home repairs or shop repairs increasingly difficult or too-expensive.
Such as setting the bulbs in the headlight sockets blocked by the vehicle frame.
Hiding the battery behind the rear passenger wheel instead of under the hood.

I think more people need to wake up to the things being done nad revolt now or it will be too late in the future.

Well, to be resistant to controlling behaviors and to be aware enough to spot them.
One of the most effective means of resisting corporate control is to negatively impact the checkbook of the corporation.
When companies start losing money, they are more inclined to straighten up.
And... this is a problem with Free (cost) software, applications, Operating Systems...
Members may notice how prevalent Free Apps and Subscription Services are becoming.
It seems counter-intuitive... It costs a lot to develop and distribute things.
Why would companies be pushing toward Free Products?
Microsoft Windows... You had to buy that. Directly. Then, it became buying it through your PC retailer. Now, it has become... Uhh.. Free.
And Windows 11 sports advertisements in the Start Menu and the Shut down window, now.
Which is one example that makes the reason more clear. It's not free. And apparently, is more lucrative and alluring to companies than charging a set price is.

I should clarify:
I do not loathe the Gnome Desktop Experience. Users need the ability to choose their desktop environment based on their workflow. I loathe that Gnome is taking strong strides to remove that choice from everyone.