I had originally planned to make a website to host themes and customization. Mitigating circumstances caused me to back-burner that project. Which allowed me enough time to put more thought into it.
As such, I have gone for a re-vamp of the idea; Instead to make a webpage that is a guide and tutorial for theming, how-to's, and listing class I.D.'s to help make it easier for Linux Users to make their own themes.
And host my themes on PPA, instead.

The advantage is in that when I update the theme, this allows the theme to automatically be updated for all users as soon as they run their updates. As well as bug-reporting. No need to download the theme again and reinstall (as you must do with Pling), that way.

Setting this up is probably easy when you know how... But when you do not know how, finding information on it is like pulling teeth. There are some guides, most with out of date or misleading information or lacking critical information. There is a Debian Guide that is wordy but says little, with vague suggestions that would only mean something to someone that already knew what they were doing.

All that said... This is a Focal Repository. The current (and only theme) uploaded as the First Upload as of today, 14 Jun 2021 is for Cinnamon, Mate and XFCE4 (4.14 or 4.16) Desktop Environments. This will work on Zorin OS 16 Lite when it is released - or can work on Zorin 16 BETA if you have installed XFCE (4.14 or 4.16) or Cinnamon or Mate on it. It is not for Gnome as it lacks Gnome_Shell, but can work on all Gnome Apps otherwise. I think.

Currently, I have only uploaded one theme (Out of a total of 37 that I have made.)> While many of my themes are original creations, I am starting out with the Flagship Theme that started it all...
Azenis and Azenis 2 was created by J.J. Ying for Windows and Window blinds in 2006. It was ported by EZ to KDE in around 2009 (I think...) and by JamesHardy88 to gtk2 /Gnome2.
This is a 15 year anniversary (chuckle) 2021 edition, updated for gtk3 and gtk 3 applications, CSD. (A no-csd version is made and available.)
Depending on how this works out - I may go ahead and start putting all the rest up for all, as well.
It is focused on skeumorphism and depth, as well as just a good ol' call to days gone by. Sometimes... Old is Still Good.

If anyone wants, I can get the Icon Set up in the same manner but for now... I need a break

I forgot to mention - Theme includes Zorin Lite Menu as well as WhiskerMenu.

Many thanks to J.J. Ying for his permission and approval to completely re-make his original Azenis into a new theme and to Graeme Gott for his documentation and pointers on Arc Menu and Whisker Menu.

Let's hope it will get more people on Zorin OS

I hope to spread to all distros, including learning how to make themes for KDE, Openbox and Enlightenment. So far, I have only made progress on Enlightenment... Openbox is pretty barebones and KDE... I dunno... I cannot ever seem to wrap my head around KDE's Plasma 5 desktop. I try and try and it always murders me...

Except Gnome, of course. I refuse to ever make a gnome-shell theme again.

I cannot ever seem to wrap my head around KDE's Plasma 5 desktop. I try and try and it always murders me...

Funny, you really sound like me!
Nice to know that I am not the only person who feels that way.

I've recently added plasma DE to try, so let me know if testing is required. I still use mostly cinnamon, but I'm always looking to improve and try new things....great learning experience. Tried trinity, not a fan (windows 95b anyone

I like Trinity - it is basically a fork of Old Plasma D.E.
But like Plasma, I cannot make heads or tails of it. I have compared Plasma Desktop to an explosion in a kitestring factory.

I have tried making Plasma themes... But I run into the same problem. Different parts of the theme go into Different Places. Like MS Windows does. Drives me nuts.

I know, I'm a necromancing, but just wanna to let you know that I liked the Azenis2021 theme and icons. Combined it with the Predator Gnome-shell.
Adjusted some icons of course. 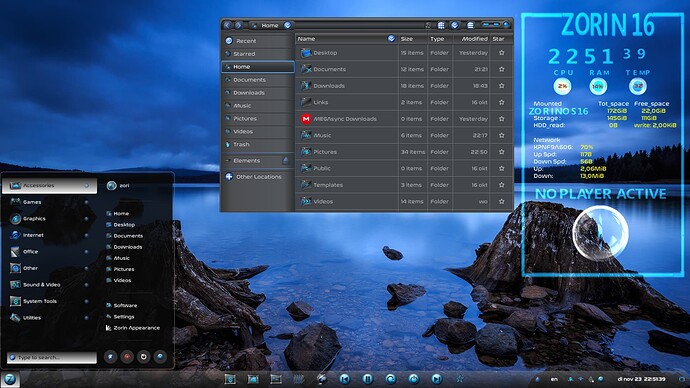 Strange thing is, I looked into the icons folder and compared it to the prowler icons. If I'm right these are png's. I'm not well know with theming icons like you, but why the difference?

Because I made the Azenis Icon set a long time ago.
Prowler Icon set was made more recently, after I switched over to .svg's.