Greetings from the Yukon, Canada,
Installed Zorin OS 16 on an external SSD drive with a 2012 27" iMac. All was well until I decided to change the screen resolution. The screen went black. Restarted, got to the log in screen fine. Log in to a black screen. Got into terminal/TTY and was able to use xrandr to a point. When I go to change the screen resolution there it says "Cannot Open Display".
Am able to get into the Wayland mode, and even created a Plasma mode, but cannot get into the original X11 mode.
The graphics card is a Nvidia GeForce GTX 675MX. Using the basic Nouveau driver on Zorin. Tried to update the driver, but had to revert as some programs stopped working after the updates.
Really like Zorin, and Zorin in KDE Plasma mode is amazing. The only real serious issues are with the Nvidia graphics.
A second smaller issue is that since this is on an external drive, I had hoped to be able to use it on other Macs as well. But none of my other Macs will even see the external Zorin drive. I installed reFind to no avail. Any ideas?
Thanks.

You need nvidia driver 390.154, keep in mind you card is legacy and nvidia does not create newer drivers for it (not often anyways). 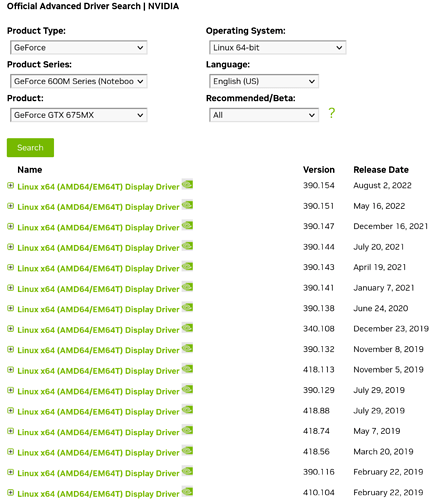 Thanks! That worked fine. I am now able to get into the original X11 mode. Wayland vanished, but that is okay. Plasma is still there.

Now onto the second smaller issue. Since this is on an external SSD drive, I had hoped to be able to use it (plug and play)on other Macs as well. But none of my other Macs will even see the external Zorin drive. Just the 2012 iMac I installed it with can see it. I installed rEFind to no avail. Any ideas?

What models are the other Mac machines?
https://discussions.apple.com/thread/252214006

Other distros on External Drives can boot - but only Zorin OS is not even seen?
That is odd. I am not sure either...
Which other distros work?
Zorin OS is based on Ubuntu 20.04. I am not aware of any kind of changes made to Zorin Specifically that could cause this issue.

I have not tried any other distros on an external drive, just Zorin.

Is it possible that the external drive that Zorin OS is on is where the issue is?
To test this... would need to set up another external drive that is known working, install Zorin OS on it, then see if it boots on the other machines.
I do not know if that is an available option to you.

Pretty much a newer Sabrent USB3 external drive, with a Crucial MX300 SSD. Both are known working. Works perfect on the 2012 iMac. Maybe the way I formatted it? Not sure.