Before posting, I did research and try several different options to get it to work. It still doesn't work, so I'm hoping someone has another solution to try.

Once Zorin was installed, the Additional Drivers window showed it was using Broadcom 802.11 Linux STA driver that came with bcmwl-kernel-source.

This wasn't working. The wifi window says there is no adapter.

Note, I did reboot after each attempt to fix this problem.

I do have secure boot enabled. I'm not sure if disabling it would help, yet.

Anyone got any other tips or solutions?

I do have secure boot enabled. I'm not sure if disabling it would help, yet.

If you have not tried yet, I recommend you to disable secure-boot and see if it helps.

I've never enabled secure boot on any of my laptops and desktops and I've never had any issue. Linux does not need secure-boot.

Thanks. Can you confirm, is this the correct way to disable it? I haven't seen anything else.

Welcome to the forum! Don't know if this will help...

Can you confirm, is this the correct way to disable it? I haven't seen anything else.

You can do that in BIOS.
No command line required (TM)

There has been many issues with this card. Have you tried this?

The solution may work for you.

There has been many issues with this card. Have you tried this?

Not for a faint hearted.... 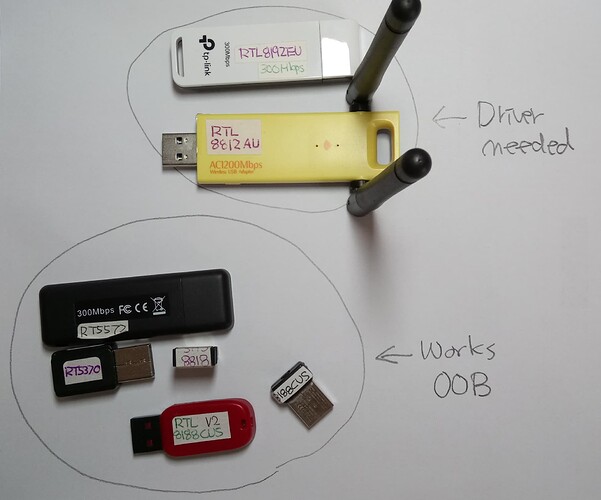 Yeah....like @337harvey mentioned there are many issues with this card and I think the suggestion would be the best bet at reception in the long run you suggest.

It recommends removing the tried versions of the driver (purge and manual search/ remove of anything left. Then install from the repo or one of the updated drivers). Every driver you try should be removed prior to trying another. Otherwise the system will get confused, if you don't.

It appears secure boot was the culprit. One of the reasons I didn't disable it initially, I couldn't easily get to BIOS on this Toshiba laptop. I've had it for 5 years, and every time I needed to get to BIOS I had to use Windows' advanced startup settings. The F2 and all other methods never worked.

I accidentally stumbled on another way to get to BIOS. While I was booting Zorin from my thumb drive, F12 allowed me to get to the boot menu screen. This screen has an option to "Enter Setup", which is BIOS. Hopefully, this will help someone.

Going back to the WiFi issue.

When I disabled secure boot, I had firmware-b43-installer installed. All other drivers were purged. Wifi worked.

So I tested a few scenarios:

So it appears that all the trouble I had was stemming from the secure boot. Based on my testing, the Broadcom 43142 adapter works with the default third-party driver bcmwl-kernel-source and it works without it, with the default drivers that Zorin ships with.

The installation wizard wording suggests that a secure boot is necessary. One of the reasons I enabled it since I had it enabled on Windows. There should be a warning that enabling secure boot will break OS functionality. That recommended setting is to keep it disabled.

Hopefully, this will help anyone else having trouble with the wifi adapters.

Hopefully, this will help anyone else having trouble with the wifi adapters.

Thank you for following up and letting the Forum know the outcome! All this will help the mods when they address issues in the future and those like myself.

Glad it was resolved and you may now gain experience with Zorin. And that is great!

Secure boot has been a thorn in the side of many and is as you can see in other posts one of the questions asked a lot.

Again Thanks and enjoy Zorin. Look forward to your post in the future and ways to improve a GREAT OS.