I have less than 2 years to determine what Linux distro I need to deploy before support runs out on my Win 8.1 Pro machines. I refuse to install Win 10. That said Zorin is currently the top candidate, if I can get 2 or 3 problems ironed out. I have networked Brother DCP-L2540's. The printers were found, and work, so no issue there. Is there a scanner program I need to use in Zorin to get access to the scanner functions? What set of drivers do I need to use? Thanks! FYI - this is on Zorin Lite.

I recommend Simple Scan. If your printer is detected, you just have to install SS. Suggested reading: Search results for 'simple scan' - Zorin Forum 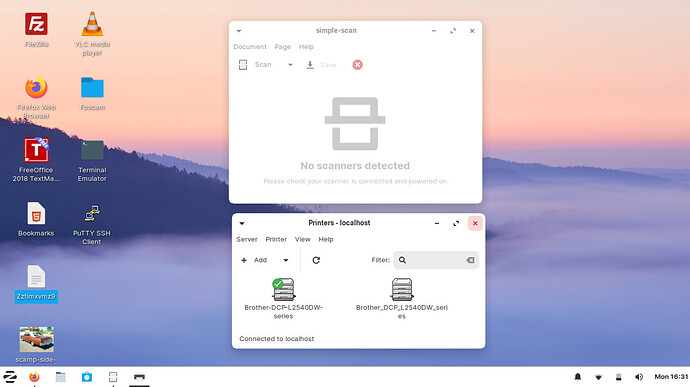 SS was installed before I did the printer install. Do I need to uninstall SS and re-install to pick up the scanner ?

I uninstalled SS, reinstalled. Same result. When 1st starting SS there is an initial "Ready to Scan" that stays up for 3 seconds and then goes to "No Scanners Detected"

Perhaps the tips in this Ubuntu thread can help:

Scanner Not detected by Simple Scan

In addition to what Aravisian posted, I recommend reading the first result in the link I suggested reading earlier. On that result, Swarfendor has mentioned checking for specific dependencies in case Simple Scan gives problems.

This will require more effort than I can give it today - obviously, nothing works given moderate effort. Thanks.

Certainly- the last one is Brother- many of the rest can be adapted to your particular device.

This is what worked in my case: sane_Troubleshooting - Community Help Wiki. I followed the Known Workarounds > Brother section. Once you download the proper Brother Tool for your model at the Brother download site, just follow the procedure. In my case, I have a networked printer, so, I specified the IP when prompted. This script installs several driver files in 2 sections - for printer and then the scanner. In my case, the backend scanner file (stated in the script, once started) was brscan4. I stopped after the script ended - there was no need to add the brscan4, since the script did that. This is primarily a Sane workaround procedure, but it makes both Sane and Simple Scan identify the scanner section of your multi-function printer. The procedure will install the printer driver as well, so you may end up with an additional printer in Settings > Printer . See subsequent sections in the Workaround section for other manufacturers devices.