Can’t get Zorin to boot without nomodeset

I’m new to Linux, although I have run different distros in VMs when I was dabbling in cyber security in high school (Kali and Ubuntu).

I initially installed Zorin OS 16 Pro in a dual boot (2TB NVME) on a newly built system. This system is running a Ryzen 7 5800X and a Radeon 6700 XT. After installing it would hang on the boot, only showing the MSI MAG logo and that was it. I was lurking on these forums and found that nomodeset helped me to boot into the desktop, but now I can’t take advantage of my second monitor, I.e. second monitor is not even detected.

Secondly, when Zorin boots, an error is displayed saying “VGACON disables amdgpu” If that’s the case are my AMD drivers not even being used? I thought Zorin had AMD support out of the box, and if that is the case, might I have done something to break them?

Any help is greatly appreciated

It may be that the updated oibaf drivers may help:

Booting without nomodeset, after the commands you provided were executed, yielded the same results, although I removed the quiet splash and it provided a command line.

This is where it hangs 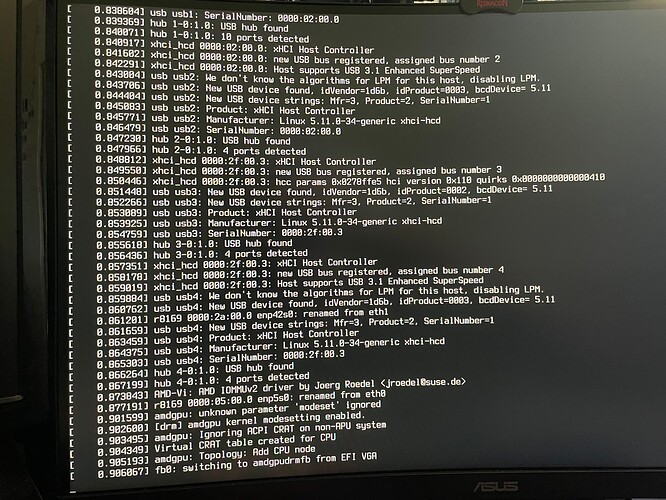 Find the package for your AMD card - it should go in lib/firmware/amdgpu/... I think.

To be sure, I would be looking for the Navy Flounder for a 6700 XT right? And so I would download all of the Navy flounder .bin files and move them to my lib/firmware/amdgpu?

And so I would download all of the Navy flounder .bin files

Yes. Because I am not sure.

I've updated the firmware and confirmed that all files in the link you provided are present in the lib/firmware/amdgpu directory, but the system is still hanging in the same place on boot.

Is there anything I should show to provide more information?

After tinkering with it more I finally had the idea to remove the boot parameters in my etc/default/grub and Zorin boots without issue. Furthermore, it recognized my second monitor instantly.

I very much appreciate your help Aravisian!

Thanks for the update - somehow, I missed seeing your post above, but fortunately, you were on top of it.