Can't choose the default application to open file in Zorin

ZorinOS is awesome, but I have a little Problem. I like making games with the RPG Maker MV. I wanted to follow this tutorial for Linux Users https://forums.rpgmakerweb.com/index.php?threads/opening-multiple-projects-at-the-same-time-in-linux.94463/
My Intention is to run more instances of RPG Maker. When I right-clicked on the project file i don't find a option to change the application (RPG Maker MV.sh) to a file path like in LinuxMint or Ubuntu. If I click "search for new application" it opens only the Software-Center. I like Zorin but i miss this Option.

Right click the file -> Properties.
In Properties -> Open with

Is that you're looking for? 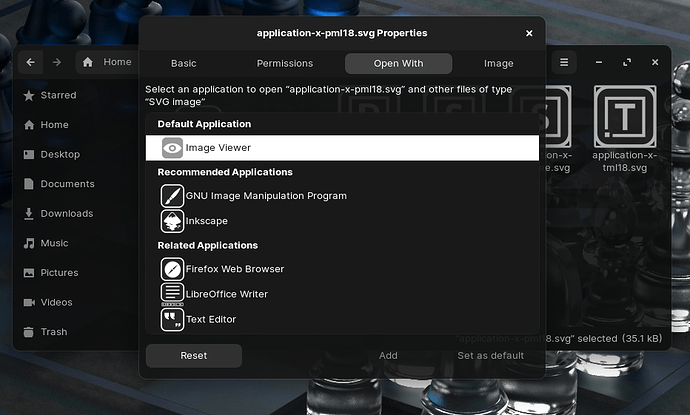 Thanks, sorry but it isn't. I'm looking for a dialog, that let me set a path to the RPG Maker MV.sh like the tutorial in the link I've posted. 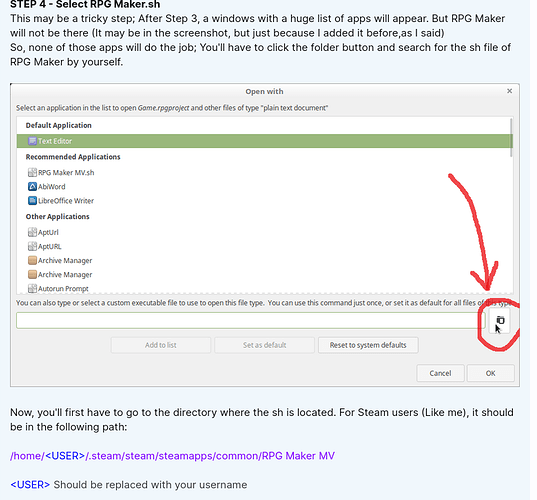 I can only choose the recommended applications. 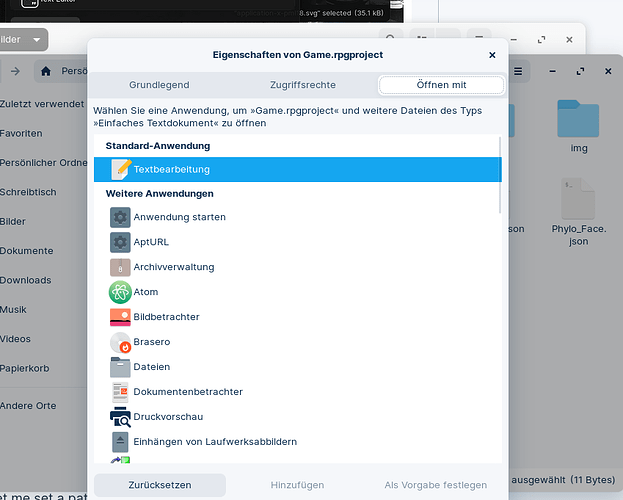 This is an example of the X Y Problem.
Right click the .sh file and in properties, ensure it is set to Run as executable. Once done, double click the file to Run it.

How did you install RPG Maker MV. Is it a Snap by any chance?

@Aravisian It is set as run as executable. But does not start when I launch it. Would only start via Steam, but there are no two instances possible. Whether that plays a role in not being able to run the sh, I'm afraid I can't say, but since you bring that up, it did make me wonder.

My challenge is that it doesn't work to let this RPG Maker MV.sh file appear in the list of "recommended applications", or on other distributions it is possible to set the path to the .sh file yourself, as you can see from screenshot1 or the tutorial link from the rpgmakerweb-forum to open the game.rpgproject file. ZorinOS doesn't provide the possibility to select a folder button for the RPG Maker MV.sh file itself. Like in screenshot1 it is in LinuxMint for example.
On Windows it is possible without problems because the game.rpgproject file is already linked to it. But even here you can only open a second instance of the program by clicking on the game.rpgproject file.

@zabadabadoo I have installed the RPG Maker MV via Steam.

Would only start via Steam

Ah... I understand. It must be launched within Steam?

When you Right Click the file, you should see an option "Open with"
select that.
Then, select "Other Application" instead of viewing that list which does not show the file.
That will open a new Window- look to the Bootm Right side for the Folder Icon. Click that to Browse to the location of the .sh file.
Otherwise, just type the Full Path to that file in the Entry Bar.

@Aravisian I think at least Steam should be started in the background. At least it is like that in Windows. 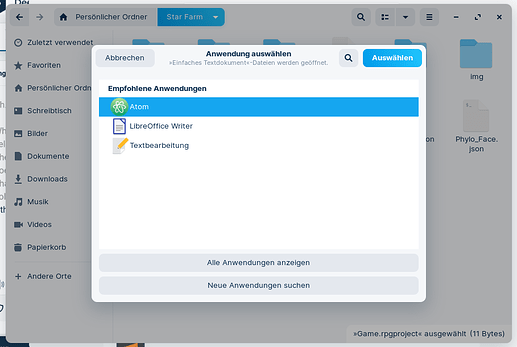 A folder icon or the ability to enter a path is not given.

You can read here again what I'm trying to do:
https://forums.rpgmakerweb.com/index.php?threads/opening-multiple-projects-at-the-same-time-in-linux.94463/

Yes, I do understand what you are trying to do and how you must do it... I think that the issue is actually with the Nautilus File Manager.
On my screen, I tested this using Nemo File manager and I am able to do the above easily.
In Gnome... That Functionality has been removed. I just now tested it in Nautilus and ran into the same problem you have.

You have two options... You can perform the entire process in terminal...
Or...
You can install Nemo File manager and perform the function just as that page describes and just as I had done it in testing on my computer.

@Aravisian Thank you very much! Yes I tried the Nemo File Manager and with it it was now possible to perform the desired steps. Too bad that such a functionality was taken out. The sense is not clear to me.

Unfortunately I encountered the problem that this "RPG Maker MV.sh" can not be executed as easily as I had hoped. On the one hand, only a small gray and transparent window is displayed for a short moment and the try (no idea if this makes sense) to execute it in the terminal shows a longer text for a short time, but it disappears as well after a short time. There is no time to analyze the terminal output.
The program RPG Maker MV starts at least via Steam correctly.

Also, thanks anyway for the time and support you have given me. I am a Linux novice and am very positively surprised about the help.
I see it as a challenge to get the whole thing to work somehow. Maybe others will face the problem and can be a good help for others in the future.

Too bad that such a functionality was taken out. The sense is not clear to me.

This reductionism, I think, (I am being honest here) stems from people saying, "Make this easier. Too many Options. I don't understand the GUI."
I find it interesting.
Some will say this about the terminal and request a GUI app.
Then the GUI app confuses them, too. Then the GUI gets reduced in an effort to make it Seem Simpler.
Now it doesn't work.

We have the power - the choice - To Better ourselves. We cannot ask the world to meet our standards; we must uplift ourselves to meet the world.
Perhaps if we still lived in an age when we were prey, when we have to evade lions and eagles, we might not believe that we are the kings of the broken wheel.

I am sorry, I do not understand the sequence here... Are you saying it does work within Steam? OR it is not working at all?

@Aravisian So when I run the RPG Maker MV application with Steam it works correctly. If I want to run it using the ".sh" it does not work. Accordingly, also not the file "game.rpgproject" which I would have linked with the "RPG Maker MV.sh".
Do I have perhaps a problem in the execution of .sh files?

But otherwise the tip with the Nemo File Manager the function I would have looked for would have worked quite and there I thank you very much.

On the point of reductionism you raise: I think I can already understand that. Even if I would have this function as a typical Windows user, that doesn't mean that everyone needs it. Nor does it mean that my thought process for running the .sh file is as easy as running an .exe file. I realize that my mother, for example, who only uses Firefox and her Telegram, Facebook, etc. does not need such a thing in principle and also with ZorinOS accordingly for her needs this GUI option may not need. Accordingly, it should not be interpreted as criticism on my part. Basically, ZorinOS does nothing wrong, ask in the community, as in this case helps quite further. Apart from that, you learn a lot about Linux and it's also kind of fun, since Linux or ZorinOS offers a great introduction for Windows users.

that doesn't mean that everyone needs it.

That doesn't mean everyone doesn't need it either. There is no sense in removing it.

So when I run the RPG Maker MV application with Steam it works correctly. If I want to run it using the ".sh" it does not work. Accordingly, also not the file "game.rpgproject" which I would have linked with the "RPG Maker MV.sh".
Do I have perhaps a problem in the execution of .sh files?

As I understood it, I thought the .sh file was only supposed to run within Steam.

Basically, ZorinOS does nothing wrong,

I just re-read this and realized an interpretation I had not noticed:

Zorin OS did not develop the Nautilus File manager nor the Gnome Desktop. The Gnome Company did that. Zorin OS also coems with the XFCE desktop and Thunar File manager (Developed by XFCE) on Zorin OS Lite.
I also run Cinnamon on Zorin OS. Cinnamon with Nemo File manager was developed by the Linux Mint dev team.
Some other users install KDE on Zorin OS with Dolphin file manager.
The ZorinGroup company did not remvoe the functionalities in Gnome - In fact, the ZorinGroup has done * a remarkable job* in restoring many removed features Back Into the Zorin OS Desktop Environment.

@Aravisian Interesting that ZorinGroup has reactivated some functions. Also, it's great how Linux in general is extremely customizable.

I tried installing the QtWebEngine BaseApp and QtWebKit BaseApp from the Appstore, but made no further difference.

But then I have a reasonable question why LinuxMint or Windows users can do it?

why LinuxMint or Windows users can do it?

I do not know much about Windows but Mint does not use GNOME desktop. I think you can do what you are trying to do in Zorin Lite which uses XFCE desktop.

I think it's a Gnome issue and not a Zorin issue.

But then I have a reasonable question why LinuxMint or Windows users can do it?

Also...
I may be wrong.
It may be that I am misunderstanding this.

As I understand it, the shell script requires steam dependencies to run. This is why the tutorial guides as it does, including pointing out that step is a tricky one. If it was something that could be run independently, then that tricky step would not be needed and would be better avoided.

Windows users would clearly not need that step and could open it independently since the script is originally for Windows... Which is why the script needs the Steam Dependencies to Run.
I cannot vouch for what Mint users are doing... Mint and Zorin have the same base, so any Mint user should have to perform the same procedure you are doing.

Why it works for other Mint users and not for me can't be explained so easily.
Although I basically ran Steam in the background during my attempts, the solution just doesn't make sense to me. Especially since the program RPG Maker MV is designed for Linux, MacOS and Windows, but maybe it's just a Steam thing that reacts differently on different operating systems and Linux forks. Anyway, thanks for your support and I'm glad to have a nice community around ZorinOS.