Changing Nautilus to something else

From other questions it became clear that I couldn't hide folders I never use from Nautilus (Downloads, Templates, Public, Documents, Music, Pictures, Videos) without also losing the right click>new document option (which I use a lot). Also the Nautilus Starred files feature seems pretty broken - it only applies to some locations, and not others. It may be causing other issues. As a result, it doesn't seem like a good choice of file manager for me.

I installed Dolphin, Thunar and Nemo as tests. Dolphin was rubbish (it gave errors for many folders), but both Thunar and Nemo seem to easily let me hide the unwanted folders and have clutter-free interfaces. As a result, I'd like to change the default Zorin file manager to one of those.

Before I get into processes (I have one that I think should work) I just wondered if there was any good reason to pick Thunar over Nemo? Does one of them have better features I am unaware of? Would making one of them the default file manager introduce problems that I wouldn't get with the other? I use file managers all the time, so want it to be kind of invisible and just work without creating irritations like Nautilus does. Or would Thunar and Nemo both be equal in terms of ease of making it the default, how it would function etc? I just want to make sure there isn't some obvious benefit to one over the other before I go through the process of making it my default. If it is just a case of slight aesthetic differences maybe I'd opt for Thunar, so if I ever go for Zorin xfce I'll already be familiar with the file manager. Thanks!

ADDITIONAL: Would changing to Thunar or Nemo lose the right click>new document option (as Nautilus does if I hide folders)? There seem to be many small differences which is why I asked about this, e.g. Thunar lets me drag a URL to a folder, as does Nemo (and Nemo is quicker as there is no prompt), whereas Nautilus won't let me ("Drag and drop is not supported"). However, neither Nemo, Nautilus or Thunar work consistently with the drag and hold Ctrl (copy) or Shift (move) to override default behaviour - that only works on some folders and some directions, so none of the three fix that issue.]

You can install multiple file managers on the same OS without hurting anything.

You can probably find at least Nemo in the software store too if you feel thats easier. You will be able to find the file managers in your zorin menu once installed. Or hit the SUPER/WINDOWS key, and type the name of the installed file manager, and click on it.

Yep, I installed them all through the software store, and have shortcuts to them. I'm almost at the stage of making one the default, I'm just asking for people's experience as to whether there are any advantages or disadvantages to picking Thunar over Nemo (or vice versa) that I might not be aware of, to help me decide which to make my default. Thanks!

Well, I like Nemo, its pretty flexible, makes browsing and setting up network shares a breeze, especially with SAMBA added to the system. Nemo is a bit more customisable over that if Nautilus. I don't know, its just a good all around file manager.

Thunar, I like it and I don't like it at the same time. I never could really get into it full bore, as there was always weird oddities I couldn't get over. Its not a bad file manager by any means, and I certainly think its still better then Nautilus too.

Think of Nautilus as your ceesars pizza. But Nemo, well thats your real Italian restaurant made by a cheff pizza. Thunar is like your, made from the subway underground by emporer papateene pizza. "I put extra extra ghost peppers on this one, may they feel the heat from the dark side."

I prefer Nemo File Manager and it can be set as default with:

Awesome, thanks! So those are terminal commands? (Just checking they aren't things to change in a prefs or the dirs file or something.) I did Ctrl-Alt-T and pasted each one in but it didn't give any errors or confirmations.

I did Ctrl-Alt-T and pasted each one in but it didn't give any errors or confirmations.

In respect of Dolphin that is what KDE Plasma uses so no wonder it did not work for you in the Gnome Environment. One of the advantages of Thunar is that it also has a separate little utility, Batch file renamer.

One of the advantages of Thunar is that it also has a separate little utility, Batch file renamer.

I had forgotten about this!
Partly because I do all my batching in the terminal. Much easier.

So does that mean, if I wanted Thunar, I would type:

I notice that software Open and Save/Save As dialogs still use Nautilus, can they be changed too? I.e. wholesale use of Nemo (or Thunar)?
Many thanks!

ADDITIONAL: I made a note of this from somewhere, so maybe this already includes those steps:

The following two commands disable nautilus from handling any desktop interaction and enables Nemo to take its place:

The following tools are useful to adjust settings that you should have access to by gnome refuses to include in settings:

Finally, you will need to open the app menu (Z icon on the taskbar) and in the search box type startup applications. Add a new entry by clicking plus. For the name I used Nemo Desktop, description can be blank and the command should be the following:

This starts Nemo in its own process and allows it to run in the background."

I notice that software Open and Save/Save As dialogs still use Nautilus, can they be changed too? I.e. wholesale use of Nemo (or Thunar)?

No way I know of, but I have not actively looked into it.
The save as dialog window is not really Nautilus exactly, but rather an extension of the desktop.
What they are is CSD dialog windows and this can be changed in a variety of ways.
Since I primarily use Zorin OS Lite, not Core, I do not usually have to deal with this since XFCE desktop manages that.
Currently, I am on Zorin OS Core with XFCE and Nemo installed by me, so the Zorin desktop handles it.
This may change with the release of Zorin OS 16 Lite.

That's fine - I can live with Open and Save dialogs being a different layout for now. I probably see them only 10% of the time that I use a file manager. And after previous chats I am pretty sure I will be testing out Zorin XFCE when the new Pro version comes out. I think it will be a better fit for me than Gnome. Gnome looks nice and 95% of the decisions seem good, but those remaining 5% are things that feel like barriers. From screenshots XFCE seems more like older versions of Windows (e.g. Win98 or XP), which is fine with me. In terms of UI I always liked Win98, WinXP and Win7. However, Win98 and WinXP were awful in terms of the underlying code - regularly buggy and crashy, and it was normal practice to have to reinstall the OS once every year. Win7 did away with that and just worked. My point is that XFCE would be like using an OS where I felt comfortable, but with the added bonus of being rock solid and modern underneath, where it counts. I don't need bling, just reliability and customisation of preferences, so I'm excited to try that out. In the meantime I can use this, where Nemo appears with Sup+E. Many thanks.

Mmm, I spoke too soon. When I changed to Nemo using these two commands, I noticed I can no longer paste a file to the Desktop - the paste option is ghosted out.

I tried switching to Thunar with this:

But it was the same thing.

So I reset it with this:

And the paste option reappeared for the desktop.

I use copy/cut and paste a lot, and the Desktop is my main workspace, so maybe I'll have to stick to Nautilus for now. It's another reason why I may need to switch to xfce, since the file manager is obviously tightly integrated and has all sorts of unintended effects (right click menus, open/save/save as, paste to Desktop) which seem to get broken by tweaking them. I think most of the issues I have are related to the file manager and how it deals with files and folders, so I may benefit a lot from being able to change to one that doesn't use Nautilus at all.

In respect of Dolphin that is what KDE Plasma uses so no wonder it did not work for you in the Gnome Environment.

Ah, so in a way I should avoid Thunar on Gnome as well, because Thunar is built for XFCE, not Gnome? But Nemo should be fine?

And the paste option reappeared for the desktop.

This is odd...
I am using Core with Nemo and XFCE installed, and the paste option on right-click on the Desktop is present and functions. I just tested it. 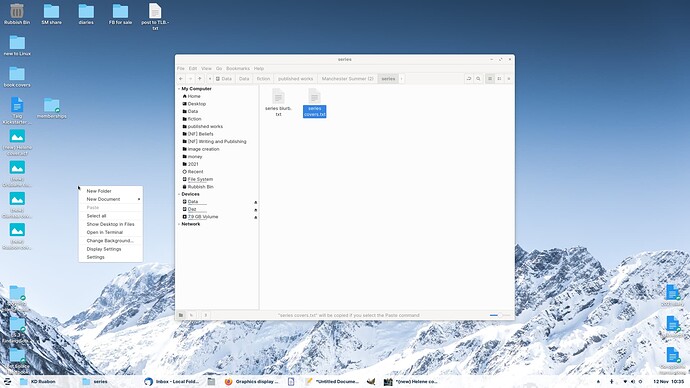 I tried it all again - paste was there with Nautilus, rebooted, same, changed to Nemo, paste was gone, rebooted, still no paste option. Here's a screenshot I took just now after copying a txt file into the clipboard.

Not to worry, I can either live with Nautilus for now, or live with no paste option on the desktop. Hopefully I won't have these issues on the xfce desktop.

This is the kind of thing that left me wondering whether some of my issues weren't underpinned by some common cause, such as ownership or permissions, or having a drive set up wrongly, which in turn led me to be more worrisome and more for people to have to put up with as I flapped around.

This is the kind of thing that left me wondering whether some of my issues weren't underpinned by some common cause, such as ownership or permissions, or having a drive set up wrongly, which in turn led me to be more worrisome and more for people to have to put up with as I flapped around.

No. I am using XFCE desktop, so that is the likeliest explanation.

Interesting, it turns out it's not just paste to desktop, but the other way too. So if I drag a file to the desktop and it moves it, I can't copy and paste a version back to the source - paste is ghosted out on the source location too. I can get round it by making a copy of the file in the source location, then moving the copy of the file to the desktop. Or I may just go back to Nautilus and put up with the unwanted folders and wait for the new xfce edition of Zorin! 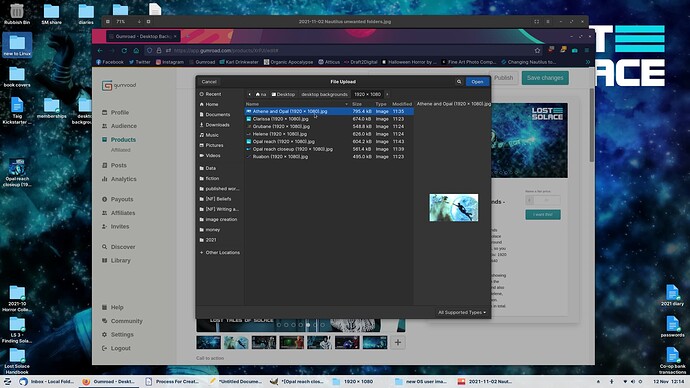