Clicking Super Key Open Up both All Application and Start Menu

Hello, first of all i just want to say Zorin OS has been wonderful for my first foray into linux desktop. It's very much customisable. I'm using Zorin 16 Core. 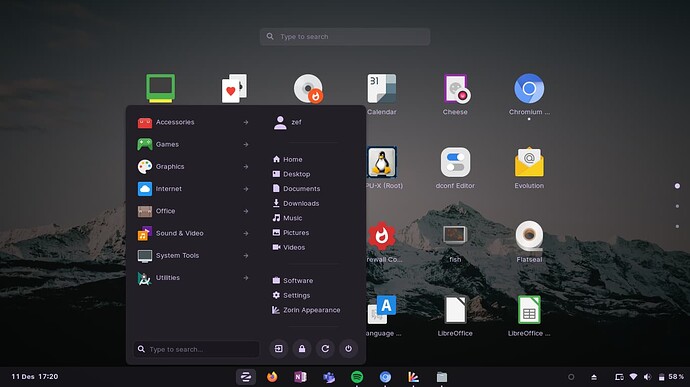 And when i tried to close the Start Menu by pressing the Super key again, i was greeted with the Overlay (?) menu 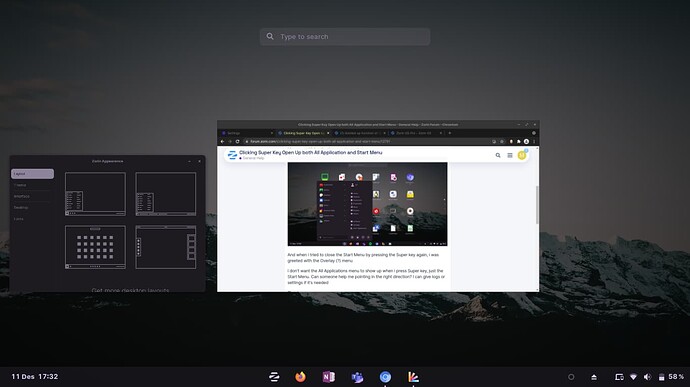 I don't want the All Applications menu to show up when i press Super key, just the Start Menu. Can someone help me pointing in the right direction? I can give logs or settings if it's needed

Actually, yeah, it works. I disabled the Show All Applications shortcut which defaulted to Super+A, and it works like a charm.

But i wonder why would it interfere with me just clicking the Super Key? It should only appear when i press Super+A.

I am glad I could help.

But i wonder why would it interfere with me just clicking the Super Key? It should only appear when i press Super+A.

Probably a bug, you can try setting it to super+A again and check if it opens by pressing the super key only this time.

In Zorin Settings, (gnome-control-center), there is a setting for using the Super Key for the "start" menu.
I cannot remember off hand and when Zorin OS 16 Lite was released, I was on it like a pack o' dogs on a three legged cat. So I am less able to log into gnome at the moment.
Would you be kind enough to explore Settings and locate that?

Yep, All Applications opened again when i press Super key after i reverted the change. Probably a bug i guess.

In Zorin Settings, (gnome-control-center), there is a setting for using the Super Key for the "start" menu.

There is?
I didn't know that...That would have saved a lot of time for me because I had once disabled the shortcut for "start" menu accidentally....I left it that way for days and ended up fixing it when I had to reinstall Zorin because of a much severe problem.

Under Zorin Appearance > Interface, there is indeed an option to change Left Super Key default from Activites Overview to Zorin Menu. I had changed it to Zorin Menu when i posted this.

But before i changed it, when i press Super key i get both Activities Overview and All Applications menu in the background.

Yeah and I would be glad if they added the right super key as well.