Hello, i tried to run counter strike global offensive from steam. whenever i try to run it, it just shows a windowed black screen

Can you run other (Specifically source engine games) on your machine or is it just csgo?

The reason for all the lag you've experienced, is due to Intel's integrated HD4000 graphics being sub-par for gaming. Truth is, its actually good enough for some simple games believe it or not, so its not terrible. But for other games where higher FPS counts matter, it is not.

The reason you are not able to load the game on Steam however, is more then likely because you've neglected to engage Steamplay compatibility and force a Proton version. Here's how you do it. Go to your Steam game Library tab. 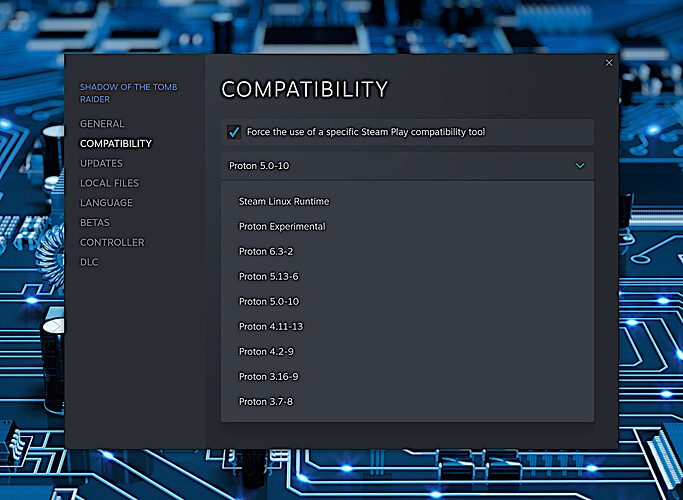 Put a checkmark in 'Force the use of a specific Steam Play compatibility tool.'

Now, as you can see, there are many versions available from the drop down bellow. Which version works, depends on the game. Start with the latest version first. If you still can't launch the game, then go to the next version down. Eventually, one of the Proton versions will make the game run.

BTW: If your ever in the market to buy a new computer, I would be more then happy to help you select one within your budget. Just let me know, and I'll help you out.

Thanks to Proton, running games is much easier on Linux now. But if I'm being honest, for the foreseeable future, gaming on Linux is just worse than on Windows. I recommend you to consider having a dual boot setup (Windows and Linux) and use Windows only for gaming. I have a similar setup that I only use Windows to play games or use some apps that are not available on Linux.
But before considering that option, follow StarTreker's steps and that might just csgo working for you.

Actually, I just found about this thread on Github
It seems that your system RAM capacity (4GB) is just too low. It looks like that CSGO itself needs 4GB of free ram to work.

At 4GB he'd certainly be up against the limit for sure. Sometimes operating systems are known for releasing extra RAM to a game that needs it more then the OS.

Also, another thing Linux does, is it has a SWAP file system. I think Zorins was 700MB right? POP OS has a 4095MB SWAP partition.

Anyways, your system would just hit SWAP for the extra need. But ya, you should really be looking into getting a new computer at some point.

Of course, these days were in a serious tech shortage, so that's easier said then done. Forcing Steamplay should get the game to run at least.

Correct me if I am wrong... But Swap would not be much help for gaming.
Technically speaking, your swap file size is limited only by the available HDD space. You could then create a swap file with 96gigs on it.
But the way that swap actually works is that it will not access the swap unless the RAM is filled and purging. Transferring to Swap has a delay. It is then only used during the time that RAM is filled and as RAM is purged, the swap is automatically dropped until the RAM is filled again. Which will probably happen repeatedly in gaming.
In productivity with document files, this may not be noticeable but can still be a real boon. But in fast paced high frame rate gaming - it would be the same thing as Running out of RAM. You wouldn't know the difference. Especially if this leads to swap Thrashing.
This could put more strain on the HDD.

Sometimes I forget about SWAP works exactly, thanks for reminding me.