I searched for 3590 and nothing was found, so I think this is not a duplicate topic.

After having Ubuntu giving me a hard time on my Cell G3 3590, I found out that despite being sold as Ubuntu compatible, it is not. There are many topics on Dell's forum about that.

I know Zorin OS is based on Ubuntu but I would really like to try Zorin OS and I did not find anything specifically about that on Google, so here it goes:

You can test it yourself in the live USB environment, make sure you test everything. If you have problems, you can list them here.

I actually came here to look for answers, not to give them

But, fair enough, this is the machine's info: 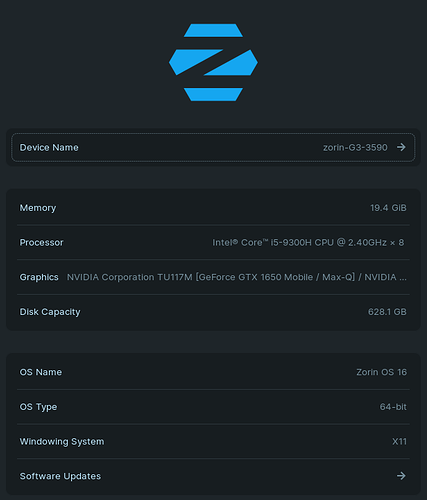 I'll bring the news here, then. When I find anything not working properly (or to my liking, like these Ubuntu things I describe below) I will update the post.

I'm testing it as a third OS and it's doing great apart from those 2 boring things also present in Ubuntu:

When I use the space bar to preview a document and click on the X to close it afterwards, the preview window opens again, so I have to close it for the second time.

After not using the keyboard for a while, it seems to be on standby mode or so, because when I start typing it takes a while to compute all the key presses. After that it works ok.

I can't use accents. I am Brazilian, so I do use them quite frequently.
This is what I get: n~ao, `a, sa'ude, etc.

When unlocking the screen, the desktop does not appear smoothly, the top of the screens lags behind and it tears (in lack of better words)

Oh my gosh, I really don't like Dell's website. I tried to look for some SPECS on that computer, and all I found on Dell's website was a giant overview of features, with a annoying chat with us for support box that keeps popping out and hiding, and no SPEC sheet to speak of on there.

And if you look at the page just long enough, it doesn't take long to realize, that Dell is trying to bank on the hopes that you will buy their accidental damage and service and support warranty's. The only place on their page where we might find some honesty, is in the reviews at the bottom.

And even that is spotty at best, cause were not really going to know which reviews are planted and which ones are not right. The page is just not professional at all, I am just amazed how bad it is. Then I tried to click back, and their site wouldn't let me do that.

So off I go back to Google on a new tab, looking for the SPECS. OK, now to a real website who knows what they are doing...

At the end of the day, this is a mid-range computer with a core I5 CPU, and its got a 1660 TI GPU, which is a more modern version of what used to be the 1650 GPU in these things. It comes with a 1080P screen, but for 15-inches, you honestly don't need more then that!

Its got 512GB of SSD for the boot drive, which is stellar, and its got up to 1TB of mechanical storage, which is more then enough to install a lot of games. This machine only has 8GB of RAM, for gaming that is not great, but I'm sure it can be upgraded!

Going off SPECS alone, this machine seems pretty decent to me. If he can upgrade the RAM to 16GB, he will have a very decent gaming machine that is gonna be able to play most games. It would struggle with games like Shadow Of The Tomb Raider, Control, Metro Exodus in anything higher then LOW settings though.

From what I can tell, its not a bad machine, but I don't trust the folks who made it though. But Kedric is right, I don't own a Dell, I certainly don't own that Dell machine, so there is no way that I could tell you how well it would perform on Ubuntu.

But looking at the SPECS, technically, it should handle most Linux distro's as long as they arn't too heavy. But of course, thats only an assumption, cause I don't own a Dell, cant say for sure, pure an educated guess is about the best that I can do.

This is what the cat /etc/fstab

Any ideas on what it could be?

Since I cannot edit the other reply any more, will reply that with some news.

Using Gnome DE to enable Bluetooth works fine just like it does in Fedora (it does not work in Endeavour OS).

Bluetooth tool lists too many unknown devices, nearly 20. The computer sits on the same place it has ever been, and no other OS shows so many unknown Bluetooth devices.

Not quite yet, but I have an idea. I want you to type in terminal...

Basically, I want to know the times that your computer is taking to do everything to boot up into the OS.

For reference, here are my numbers when I run that command...

Thanks for the quick reply, @StarTreker !

I assume when you run that, were going to find that you are using the 5.11.36 kernel correct? Well, I suggest we role back the kernel and try that.

From machine off, hit power button to turn machine on. 2-seconds after hitting power button, hold down the shift key until GRUB loader comes up.

Now go to advanced options. And then initiate a kernel override with the 5.11.27 kernel if its available. Try that and see how you boot. Post new results as well with the systemd-analyze.

I was on thirty-something, yes. Not sure if 36, though. Changed to 11 and the result is the same, even the message about the starting job on that drive.

No, something is not right. I assume you have the OS installed on an SSD correct? Even if the OS was installed on a slow mechanical drive, I would expect boot into OS no more then a minute.

Your going to need Aravisian to help solve this, as I have no clue at this point. At least I helped in getting more info which Aravisian or someone else can use to help you further.

The elimination of these two can help.
Check if you are using any snap packages, first.

You only really need networkd-dispatcher.service if you are running a server, so: