Dell Inspiron 7400 laptop overheats when trying out Zorin from USB

Hi, I've got a Dell Inspiron 14 Model 7400 which I want to use Zorin on. I've already succeeded in booting from a USB stick and trying out Zorin Core from there (but I haven't installed it yet). Everything seems to work, except for the fingerprint sensor (no option in the settings or anything, even after following certain online tutorials)*.

However, even though I don't do anything the laptop seems to overheat. The area above the upper keyboard row (under the display) gets quite warm. I don't know what kind of hardware is installed under that warm area.

Zorin's task manager didn't show unusual CPU usage (just a few % per core, nowhere more than 15%). However, Psensor indicated that the temperatures of the cores and the Nvidia MX350 were quite high (from 40°C to 70°C).

Unfortunately, I don't have any screenshots as I quickly turned the laptop off in order to prevent damage etc.

One reason might be that Zorin maybe uses the Nvidia card all the time, even for small tasks, leading to high temperature. There's also an Nvidia configuration application pre-installed on Zorin where one can set the Nvidia activity to "on demand". This sounds like, when activated, the Nvidia card would only run if it was actually needed. Unfortunately, one needs to restart the computer in order to enable that setting, meaning that I cannot try it out without actually installing Zorin.

However, this doesn't explain the high temperatures of the regular cores.

I'm quite desperate and clueless because I really want to switch from Windows 10 to Linux, but I don't dare just installing Zorin on the off-chance hoping that the temperature issue can somehow be solved. I don't know what to do and I'm happy about any info or advice.

*Though, I haven't been able to make Windows 10 recognize my finger either; when trying to unlock Windows, it just says "finger not recognized" LOL.

PS: The laptop is new (no hardware damage, no dust etc.) and the issue doesn't occur on Windows 10.

Any of the possible fixes would require a restart. There are gnome extensions to ease the change from nvidia to integrated graphics. This can also be done from the nvidia server settings (which do have a default of on demand).

You can either try a dual boot and attempt to fix this after install or stay with windows. There really is no way to resolve this if it's not installed since most of the fixes require persistence (something not yet working with zorin 16 on usb). It is up to you. It could be the nvidia driver, a setting needed for grub, possibly just a firmware update. These can only be done in an installed os.

Edit: the fingerprint reader issue may not be resolved for some time, depending on the communities efforts to include new hardware and reverse engineer software that many companies will not port to Linux.

Can you check if there is any option in BIOS to use just one GPU (either integrated or nvidia)?

I haven't noticed such a setting in the BIOS but there is one in the pre-installed Nvidia application (however, I can only try it out if I install Zorin).

If the hardware is very new, I'd suggest using ubuntu 21.10 because of newer kernel

as for overheating, i think its because the storage is ram and you've installed some software etc and used the storage

Nvidia prime? That may be able to manage hybrid graphics. Unfortunately, it didn’t work for one of my machines.

New cool paste could make a difference. I use liquid metal as cool paste.

I aim to keep anything running under 60degrees C maximimum. My current machine averages 32 degrees c max and I always keep it under 40 degrees.
100 degrees C is Very High and I would not encourage anyone to run at such high temperatures, nor have I seen computers that are supposed to run so hot.

@Aman9das I couldn't find out when the laptop was released but it must have been before March 2021 as there are online reviews from March. Sure, I will try out other distros like Ubuntu or Mint, maybe they don't have that problem. Using Zorin would've been very nice though (I especially like the design

What do you mean by that? I don't quite understand

. I haven't actually used the laptop yet because I just got it (Christmas). The very first thing I wanted to do with it was intalling Zorin. So the SSD is pretty much empty.

Maybe it has something to do with the USB stick? It has only 8GB of storage.

If you are experiencing this in Zorin OS, you are likely to experience the same in other distros. If you do not, it is most likely that the Zorin Install had a corrupted file during installation.
You might try the tips outlined here:

Most Effective Ways To Reduce Laptop Overheating In Linux - It's FOSS

Most effective tools and tricks that will guaranteed reduce the overheating in Linux laptops.

If this is a New Notebook, heat sinks, thermal paste, etc. would not be my first guess.
Though if that fresh... I would actually do a complete reinstall of Zorin OS, then try the tips from the above article immediately after.

Here are some news: I tried out Zorin from the USB stick again but this time without the Nnvidia drivers and the laptop didn't overheat. It was a bit warm but not really hot. As you can see in the Psensor screenshot the temperatures were mostly between 40°C and 60°C. It was cooler when I didn't do that much and it got hotter when I opened multiple applications at once, which is a behaviour that I find normal. I let Rick Astley sing "Never Gonna Give You Up" on YouTube, opened an OnlyOffice document and tried out the app store and the calendar.

Now, I checked the temperatures on Windows with Open Hardware Monitor. I expected them to be lower but they were actually quite similar: also about 40°C to 60°C. I also felt a similar temperature on the keyboard with my hands. I also let Rick Astley sing on YouTube, opened an OnlyOffice document and had some settings windows open.

All in all, I think that the Nvidia card is actually the part that causes heat under Zorin and that Zorin does not have a (noticable) heat problem without the Nvidia drivers.

I think I will dare to actually install Zorin (probably as dual-boot) and to try some of the online tutorials about Nvidia heat regulation etc.

Would you say this approach is reasonable?

P.S.: I saw that there is a pre-installed Dell application on Windows called "Power Manager" where one can, besides other things, choose between 4 different temperature settings: optimized, cooling, quiet and ultra performance. Unfortunately, that program doesn't seem to be directly available for Linux. 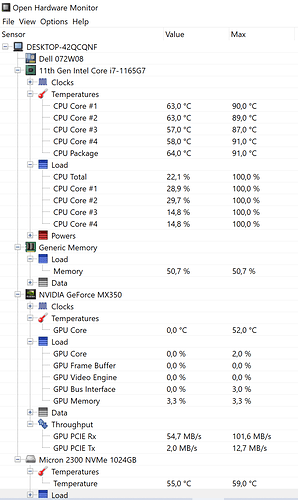 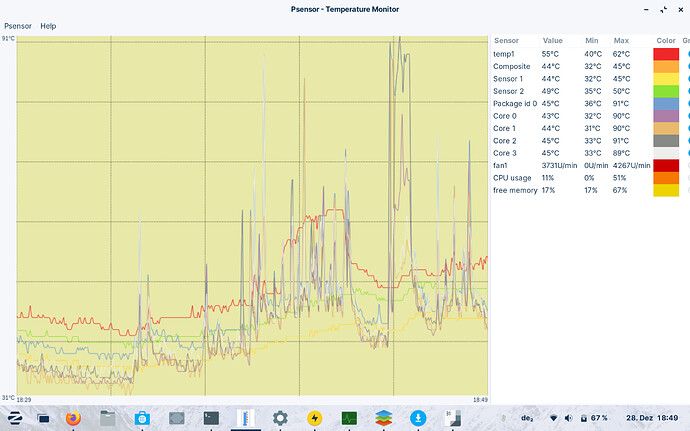 Than never buy any Laptop from that fruity company ....

Most laptops are running quite hot do to the small cooler and fans. 70° to 80° is common on full load.

My laptop runs idle between 38c and 48c. Those are normal temps.

Ideally, 70–75 C is considered normal temps under load for the GPU. CPUs should usually stay a little below that, at about 65–70 C. Above 80 C is considered slightly above normal, but still bearable, for GPU. Above 85 C, GPUs really start sweating, and above 90 C, something is seriously wrong.

I've installed Zorin as dual-boot now. I noticed a heat-up after the successful installation and saw that the proprietary Nvidia driver was already installed although I actually wanted to do that manually.

However, I opened the Nvidia Server Settings and noticed that "Performance Mode" was pre-set so I switched to "On-Demand". Due to Zorin being installed I could actually try that setting out by re-starting the laptop.

And voilà: It seems to have solved the heat problem. The Nvidia temperature currently is at about 40°C which I find normal.

I will continue to monitor the temperatures closely for some time, but I am optimistic that everything is now in order.

Thank you all for your help!

Unless you are using for gaming, and definitely while on battery, I'd advise you to change to the integrated graphics until you are plugged in and gaming. For the most part my nvidia card sits idle, utilizing the amd integrated radeon card and running much lower temps, less battery usage and not that much difference in graphics. Can you really tell me you can see the difference between 4k and 1080p or the imbetween of that in a laptop screen? Most people can't... though they will claim they can. That is a personal choice, but will keep your system cooler and using less power.