Hey guys - totally new to Linux. I've decided to move away from Microsoft a couple of weeks ago. I still have lots to learn about Linux. I choose Zorin and absolutely love it.
So here's my problem. I simply cannot figure out how to change names of my desktop icons. I've tried F2 - nothing happens. Right click doesn't reveal a "rename" option. And I don't understand sqat of the terminal other than paste commands.
So is this a bug, a choice by developers or just me being stupid??

A simple right click on the icon should give you the option. 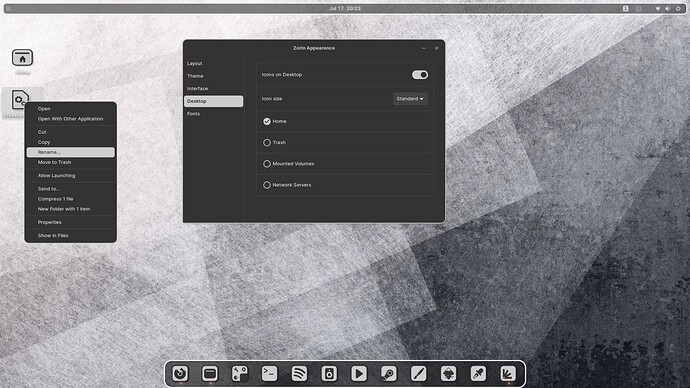 Provide a screenshot for us to see. I'm no expert, but a clean wipe and reinstall should fix it. If not then there's some incompatibility between zorin and your system, if you can't find anyone with the same issue then just try a different distro and see if something similar happens.

You might also tap the alt+F2 keyboard shortcut and enter in just
r
then hit the enter key - this will reload the desktop.
Reloading the desktop may cause the desktop services to initialize.

I can rename my own files that way - images, PDF ect. But not shortcuts to downloaded programs. Right clicking those doesn't reveal "rename" option

Thanks for the input

I tried your solution, but still same problem.

I am running a danish version, so I don't think a screenshot will do much

Right click gives me rename option with my own files - but not programs I have downloaded.
For instance I am using Geary email - and on the desktop it is named Geary - but I would much rather just have it named Email....

I understand, now.
You wish to rename a file on the desktop that is already named in its .desktop file.

If you navigate to /usr/share/applications, you should see the .desktop files for your applications. Choose any file and right click it, then from the menu, choose "Open with Text Editor"
There, you will see the Application Name.