This probably isn't a Zorin problem, but an NVidia one, but since I'm running Zorin 16 Pro I figure I would ask here.

When booting from USB, both screen showed up, but after a full install the monitor on my second 1050TI won't allow any desktop.

It's on, and I can drag my mouse onto it, but the mouse cursor turns to an"x" when ever I drag itno that monitor. 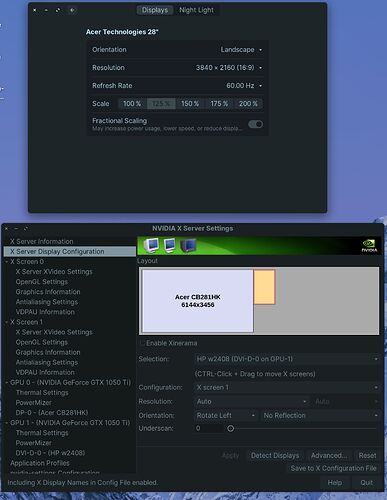 I just got a dell Precision T7910 Workstation with dual Xeons an 16 RAM slots.
I had 2 nVidia 1050ti I bought 5 years ago and never used do to IRL problems.

The good news is they appear to work, but now I can't get then to work together.
I was hoping to hook up some extra monitors to the as I have 2 4K monitors and several 1920x1200 screens I had hoped to use for tool displays or for a Wacom Cintiq.

Thanks in advance for any tips.

Find the Perfect Drivers for you NVIDIA First and Confirm if you are using the same.

Try these if they help,

How to configure two monitors on Ubuntu 16.04?

Hi, My desktop has: 1 Intel integrated graphics card 1 Tesla K40c 1 Geforce 1060 6G Everything running on Ubuntu Gnome 16.04. I would like use the Intel card to display and use Tesla and Geforce only for CUDA applications. I followed many links,...

I use dual displays, as well. I could never go back to using just One Monitor...
On Nvidia, I have experienced an issue that is particular to Nvidia - the difference between HDMI and Display Port.
I have found that Nvidia does not like these to be mixed.
How are you connecting both monitors to your video card? Both cables are direct to the Nvidia ports, not one to the integrated card port and one to the dedicated card port, correct?
Are you using HDMI and Display Port or all HDMI or all DP?

Well, I got little update. i have both my monitors working, but they are both off the primary graphic card.

The second card isn't recognized at all by Zorin Display, but is seen by NnVidia x Server desktop.

I was using DisplayPor ton the main card, and DVI on the second card.

HDMI on the second card didn't work either,
I'm going to get some tech spec and post back.

I wonder if this has anything to do with the T7910 being a Dual CPU machine. I have the second 1050TI ob a slot dedicated to the second processor. 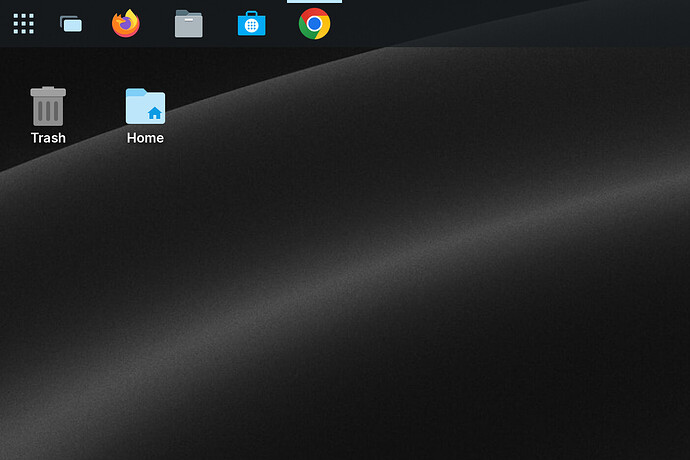 Can you check the Zorin Appearance app - Layouts and see if you are on a different layout than normal?

I have to load it fro the app icon you see, but it's the same story in every layout.

Well.
For Core...
You could try reinstalling the extension for the menu:

and in the extensions tab, ensure that the menu extension is enabled.

OR reinstall the complete desktop, just to be sure....

Always being a fan of nuclear option, I reinstalled OS Desktop and my "Z" is back!!!

Well there was a new problem. Every program I launched logged me out and then failed after I logged back it,

I formatted the drive in Gparted before Installed. TWICE!
Seems the copy of Blender in the updates is borked, which is my primary use for the computer. This time I'm checking everything and it's just Blender not working do far.

Everytime I try to start it, it logs me out and when I log back in it's crashed.
Going to try uninstalling it and reinstalling the .deb version to see if that works.

Reinstalling Blender worked.
Seems like it was just Blender.
At least after the 4th install.

I don't suppose there is a post that can walk me through this.

Sorry, but at this point I'm starting to regret buying Zorin. I know.. I know... blame Nvidia.
The fact is I need Cuda support and Windows is no longer an option for more reasons than I care to list.

I assumed that when it said it came with Nvidia drivers, it meant the REAL drivers that are hard to install. Like PopOS.

Zorin has been pretty great on my 2012 Laptops, letting me keep working on them without too much trouble. I just sent a month in the hospital with my i3 and never thought twice about using Zorin.

Now that I'm on the most powerful machine I've ever been able to work on however, I'm spending more time trouble shooting graphics drivers than getting work done.

I feel like I could have stuck with Mint if I wanted to bash my skull against driver issues.

It's going to take more than a "pretty face" to make the average user willing to pay for something they can get elsewhere for free.

On a more positive side note, my additional 64GB of ram should be here in about a week, giving me 96GB total with 8 RDIMM slot left to fill!!!

and now I need to remove them before Nvidia will let me install the propriety ones.

You do not need to remove the Open Source Nouveau driver in order to install the Nvidia Proprietary drivers.
Open Software & Updates and navigate to the Additional Drivers tab.
You can select which driver to use from the list. I am currently using the 515 Proprietary Tested driver.
If you do not see any drivers, please run

Just bumping this since my second graphic card is still not hosting any screen.

Second card?
Did you replace the nVidia 1050ti? Or is the second of the two you have?

No replacement. Just trying to get both GT1050TI working a the same time.
Ultimately I would like to get all my Cuda cores available to Blender.

I have had no real trouble with my NVIDIA GeForce RTX 3060.
The 1050Ti, I must admit, is often mentioned on these forums...