Can I replace the WYSIWYG editor in Evolution and what is the best replacement?

I'm using Evolution as it was the default email client in Zorin. I'm not able to solve the following strange issue: editing pasted HTML text is almost impossible. I'm pasting text from a website. I do not mind small changes or misinterpretations (it is an HTML at last), but I'm not willing to paste-as-text and to format the whole text from scratch. It is just too much work (once already done on the website). Still, I need to make some additional minor edits (remove pictures, add source to the bottom, delete trailing blank lines,... ). The editor makes unexpected additional changes while editing, e.g.

I would rather replace the editor only (I have got used to other Evolution features), instead of replacing the email client. But if there is not replacement for the editor, I have to switch email clients.

Evolution is outdated when it comes to basic things that you would expect on an email client. To say nothing of the fact that it doesn't even do things that were expected of 15-20 years ago.

I've actually been trying to use Evolution instead of Outlook for a few weeks now and I can tell you it is a daunting experience. It is like being transported back to 1999 all over again.

I do a lot with HTML emails as our confirmations are sent to customers like this with all kinds of moving parts. And like you sometimes hey need to be adjusted before sending. You are correct, it doesn't let you take out white space for some unknown reason. You can see it, you can highlight it, you hit delete and nothing happens. I've also found that when changing something it doesn't always keep the formatting and you must play around with the settings to try and get it back. Because they still don't have a selection for font or font sizes it makes it even more difficult.

I've had no problems removing pictures or even adding pictures. I've learned to be very careful in removing things as sometimes it removes other things you don't want removed.

Unfortunately as well, the version we get isn't even up to date. For instance the Gmail contacts error is supposedly fixed in 3.4 but we're still stuck on 3.3.

I'm not even sure how you would go about replacing the editor inside of Evolution since it is baked into the program.

You may want to go ask in a Gnome forum, there is one on Reddit that I know of. There is no forum that I've found for Evolution itself since it is a Gnome program.

You just have to tweak it a bit: 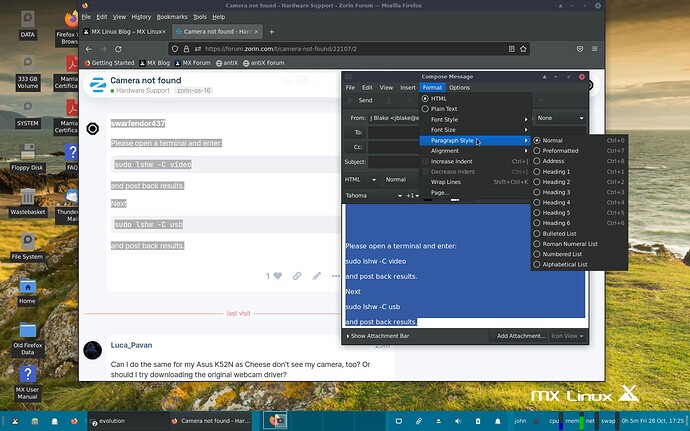 Make sure set to HTML, change paragraph setting and change format to 'preformatted'.

Evolution was great for me during lockdown as I could access my emails from Outlook365 online - and much easier on the eye,

Make sure set to HTML, change paragraph setting and change format to 'preformatted'.

I just tried doing that on one of our confirmations, it did not remove the white space. I can still high light it, as soon as I try to remove it, the cursor goes to the bottom of the email.

In Outlook, it would take it right away

Evolution is among the top items in some rankings and usually second after Thunderbird -- so it would be worth to give it a chance. The Gnome site claims that Evolution 3.44 is stable. How can it be updated on Zorin?

I have 3.36.5-0ubuntu1 on my system with Zorin.... You may want to look in the store or use Synaptic for a version one step up.

System and Synaptics says 3.28.5 is the last available and up-to-date...

What can I safely do/install with a downloaded the tar.xz Index of /sources/evolution/3.44/? (besides deleting it safely

I have just checked the Main Universe Repostiory and it does contain Evolution 3.36
It is also listed in pkgs.org for Focal Fossa:
https://pkgs.org/search/?q=evolution
Are you set to Main Server ?
Are you running Zorin OS 16?

What can I safely do/install with a downloaded the tar.xz Index of /sources/evolution/3.44/? (besides deleting it safely

Nothing, it won't install, evolution works with Gnome and you must have all the required dependencies. Which Gnome is intertwined with Zorin, which means you can't just willy nilly be changing things as you may break your system.

Open the software store, search evolution and you should see different versions of it. One is Zorin and the other is a Flatpak. The Flatpak one is 3.4 whereas the Zorin one is 3.3. I tried installing the Flapak version and even that failed for some reason.

Surprise, surprise. Evolution is in the Zorin app store in version 3.46.0 (by Flathub.org) -- which is beyond the development version...

I did not expect that, because it was not offered for update.

Remember that flatpak and snap will have version numbers beyond the development cycle because of the necessity of the snap/flatpak devs performing library, base code and security version updates (most of which has nothing to do with the software you are using, only the container that allows it to run as snap/flatpak).

For this reason, the version number should not be the deciding factor when you are interested in updating. The latest version, as nice as it is to have, may not work depending on dependencies, base code version and many other possibilities. You may be missing some features that are published in a newer version, but are those features worth breaking the rest of your system for?

The opposite could be true as well, the developers decide to remove functionality, compatibility or some feature that they no longer want to support. Perfect example is gnome.

So, when deciding, just like anything else you purchase or attempt to obtain, review the pros and cons... what features are added, what is removed, what's fixed and what's broken. This could cause instability in the OS, other software (especially if it requires different dependency versions), or storage for additional versions of dependencies. The latest and greatest isn't always the best if you want a stable, working system.