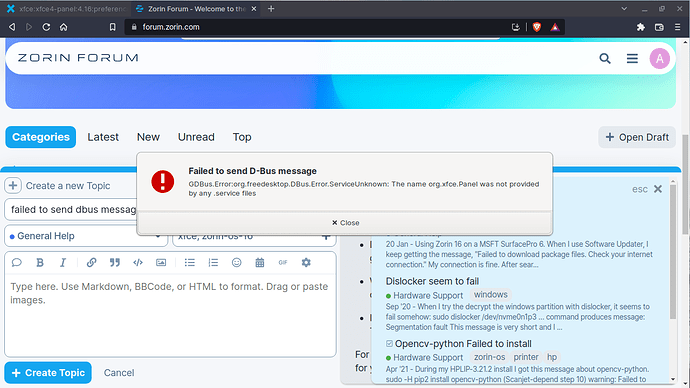 Can you please try:

It's still not working I tried that command in the terminal and restarted afterwards even.its giving me the same error as before

When I typed in to kill all xfce panel it said no process found when I did the debug the Taskbar popped up again, the menu seemed to be working too, I had to leave for work I'll give you an update when I get home. Thnx

Thank you so much, everything seems to be working fine,also if you wouldn't mind could you explain the error to me.

,also if you wouldn't mind could you explain the error to me.

I do not know the cause... since there could be many things...

The bus in computers transports messaging from one component to another.
In Linux, or Ubuntu Or Zorin OS, the D-Bus package manages communication for systems to call on one another within the system. Let's say that you launch an application that also needs the xfce4-panel in order to work - that application calls on the panel - dbus transports that message. Now, both components are Working Together.
A file corruption or a crash... Many things can interrupt that communication. Sometimes, a configuration can do it.
Let's say you set up an application with a .conf file that tells that app to behave a certain way. Let's say, for this example, you want it to start on a delay for one reason or another... But let's say that the application must initialize prior to the application it relies on, in order for d-bus to pass the communication. However, that delay in the configuration causes it to init after the other application, when normally, it would start before it.
Then it failed to send the message to dbus.

Thank you, it started when I tried to change appearance on the zorin 16 lite non pro version, I'll try to if I can get it to break again, or if it happened by coincidence or because of some other process Going on