[Continuing to split my big post up into separate ones! Apologies if anything seems disjointed as a result.]

Windows used a starred section of WinEx for folders; to have links to files I pinned them to the taskbar program icon. Zorin alters this, and uses Files bookmarks for folders, Stars for files. That is fine, I can easily adjust. I chose a layout for Files that includes a column for marking starred files.

Obviously my preference would be for me to be able to star any of my frequently-used files, so the feature works fully. As far as I can see, the only other options is shortcuts placed on my desktop, but that will make it messier. Still, I could adjust to that if Starred just doesn’t work for the whole PC.

Karl, in another thread, we covered installing the ntfs-3g package and then adjusting the ownership and permissions on the NTFS formatted drive. Has this been done yet?

I followed all the instructions earlier, and it didn't make any difference, wouldn't let me change anything still - I responded in that thread (apologies if you mean another one I haven't seen yet). Am I meant to be able to star files on any drive in Zorin?

Am I meant to be able to star files on any drive in Zorin?

Honestly, I have never tried. I am also having difficulty understanding your questions.
I used Windows XP up until recently, when I migrated from Windows to Linux not long ago.
I never used a "Starred" folder feature, so I am not sure what it is that you are trying to achieve.

Okay. Files in Zorin has one section near the bottom for creating links to folders you use a lot. But you can also create a list of files you use a lot by starring them, then they appear when you choose that option at the top. So I could use it to store the files I access every day. This image shows the two areas I mean. So using Super+E lets me then jump to key files or folders in just a click. 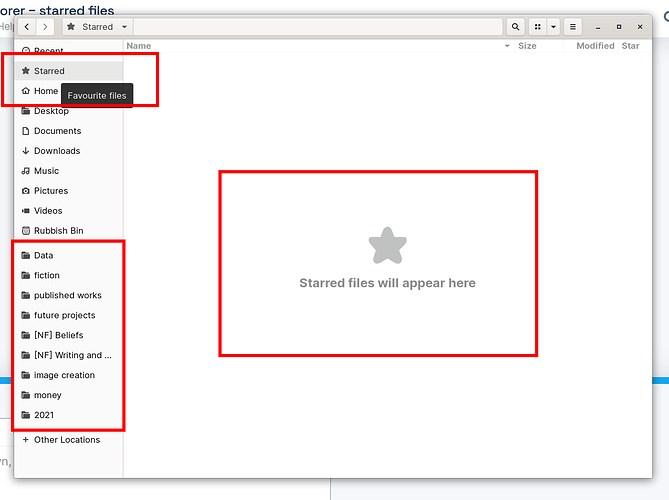 Ah... I see it. I do not use Nautilus (Files) file manager. In Thunar File Manager, SpaceFM and Nemo, these are Bookmarks (And SpaceFM is probably best suited to this task.)

Your "D" drive is in NTFS, correct? This is again, where NTFS is being incompatible - it cannot manage symlinks which is necessary for symlinking to a file from another location.

I wonder if Cloud Storage may suit your needs, by linking to a web-link, rather than a symlink. I am just thinking out loud.

I just use whatever the default Zorin apps are. I didn't even realise it was called Nautilus for a while, because when I do Super+E it is just called "Files".

Yes, my D/Data drive is the separate 4TB NTFS HDD that can be read by Zorin and Win10. I don't understand symlinks. So this is an issue where Linux can read NTFS and write to it, but for some reason doesn't know how to link to a file on it?

I didn't even realise it was called Nautilus for a while, because when I do Super+E it is just called "Files".

Sorry, I needed an explanation.

Apple calls their file manager simply as "Files".
Their mailer is called "Mail".
(As if macOS is the only OS exists under the Sun).

It is amazing/amusing/annoying the GNOME developers follow this trait.

The problem is without knowing the actual name of the application, you do not have any control over it.

For example, I can open Nautilus with root privilege with a command:
sudo nautilus

But it will not work with a name "files".

This reminds me of an fairly tale "Tom Tit Tot".
Human managed to overcome the devil only after he found a real name of the devil.

Ah, that makes total sense! And yes, it caught me out exactly as you said - I had tried to sudo the file manager and got rejected because it wasn't its true name (and there was no obvious way to find the programme name, I looked in the help/settings).

Actually, I had assumed Linux was a bit better at this, because before I installed it I read a magazine full of tips, often about using the terminal to do things with programs. I'm fine with that, on my first PC I actually ran more programs from DOS (music players etc) than from Windows (3.1), which had to be loaded like any other program by typing "win". Many days I didn't bother.

So in Zorin I use the Software app to find and download things. I knew I could do the same with the terminal if I knew the program name in the repository. But in the Software app it doesn't give the "actual" program name anywhere, enabling that! The Details section would be the ideal place to have a line with the executable name, but it doesn't seem to be there. That means it sortffo locks people in to the GUI method, even when I'd be happy to get the name from the Software app, note it in a file of things to install, then paste it all into a terminal and install everything in one click whenever I reinstall the OS. Much simpler, but Software doesn't help me out.

first PC I actually ran more programs from DOS (music players etc) than from Windows (3.1), which had to be loaded like any other program by typing "win". Many days I didn't bother.

If you are coming from CLI, I think you would find Synaptic easier to use than Software.
sudo apt install synaptic

This is the only way my husband install/uninstall apps from his system.

I had assumed Linux was a bit better at this,

[A Terror So Terrifying, You'll Swear It's Just A Myth]

Gnome did not used to follow this trend, but started to.
I think it demonstrates clearly how Gnome feels about The Users.

OFF:
Most users on Windows and MacOS have no clue what they do. Sometimes I work as support, believe me either companies spend more money on teaching people basic (not Basic

) computer skills, or these OS developers make it more and more simple.
Where the problem lies, I think, that Gnome devs predict Linux will be a mainstream OS someday, where simplicity is gold. I don't think this will ever happen, and geeks/gamers/nerds, like us, do not need simple stuff... I hope someone from Gnome reads this.

Since this is a totally new environment for me, it's interesting to start to see a kind of factional thing between Gnome and KDE.

I have just starting reading "Linux in Easy Steps" which is proving useful - it is based on Mint Cinnamon, which is also Gnome I think. So I have never seen/experienced KDE. To be honest, I want a simple life, so where possible just use things as they come, and then I go through my list of tweaks (every preference, everything to install - I already made one for Zorin!)

Where the problem lies, I think, that Gnome devs predict Linux will be a mainstream OS someday, where simplicity is gold.

But things like making scrollbars harder to use goes against simplicity, as far as I can tell. My mother is scared of computers, but she is gradually learning - I spend time with her every week. Even double clicking is hard for her. Narrow scrollbars are far more difficult for her than thick ones, and if they auto-hid she'd be even more confused.