I recently upgraded from Zorin Core 12 (yes, I know) to Core 16 as a dual-boot with Windows 10. The upgrade itself went fine, but things went wrong when I tried to reinstall a driver and instead of disabling secure boot switched from UEFI to Legacy BIOS boot mode. Got it switched back, but at that point, Zorin seemed gone. The computer automatically booted into Windows. I followed the advice here: partition - Zorin/Windows 7 Dual Boot on New Hard Drive, no GRUB! - Unix & Linux Stack Exchange (in short, remade the bootstick, created a mountpoint, mounted system on mountpoint, change root, reboot)

That also kind of worked, in that there were now three boot options in BIOS:

Switched generic #2 to load first and that did load into Zorin, but... still no dual option at startup. Ran a grub recovery tool, and when the system restarted it only wants to boot Windows again. There are only two boot options this time around,

and this time switching the boot order didn't have an effect. The system still booted into Windows.

I'm a complete newbie in over my head and quite frankly am wondering if it's even possible to fix at this point. Even if it's a wash, I'm concerned something happened with the partitions that would make a 'clean' reinstall a disaster. I've attached a screenshot of the partitions as they are now, but I'm not sure where to go from here. 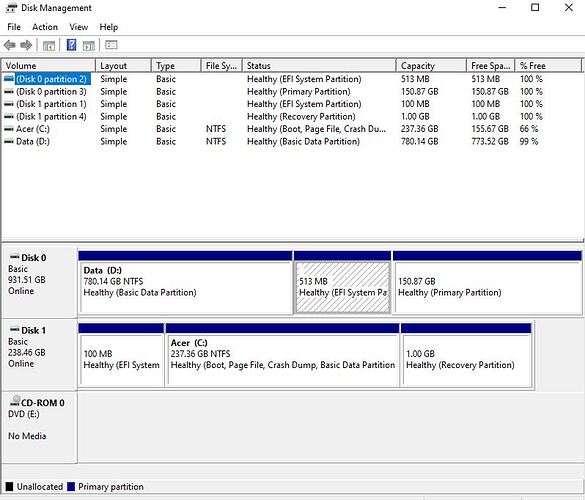 Any advice would be appreciated, but please keep in mind that when I say 'newbie', I mean 'never touched a terminal before Zorin two years ago/ 2-3 steps above your computer-illiterate relative who uses you for tech support' newbie. I can follow directions, but may ask for clarification/definition on 'basic' things.

When you say "Upgraded," Do you mean that you Installed Zorin OS 16?

Yes, to clarify I did a clean install following the instructions on the Zorin website by removing 12 & installing 16 via USB bootstick.

I see two EFI partitions in your screenshot. One is about 512megs (normal) and one is about 100 megs (also normal, but a bit small). You should have only one EFI partition.
Have you tried Boot Repair for Zorin OS?

I used the Boot Repair when the system was only loading into Zorin. When the Boot Repair finished & restarted is when the system went back to only booting into Windows. I don't know if this helps, but I found two screenshots from after the initial crash, but before remaking the bootstick/mount point. It looks like there were two EFI files at that point as well. The new mountpoint was on SDA. 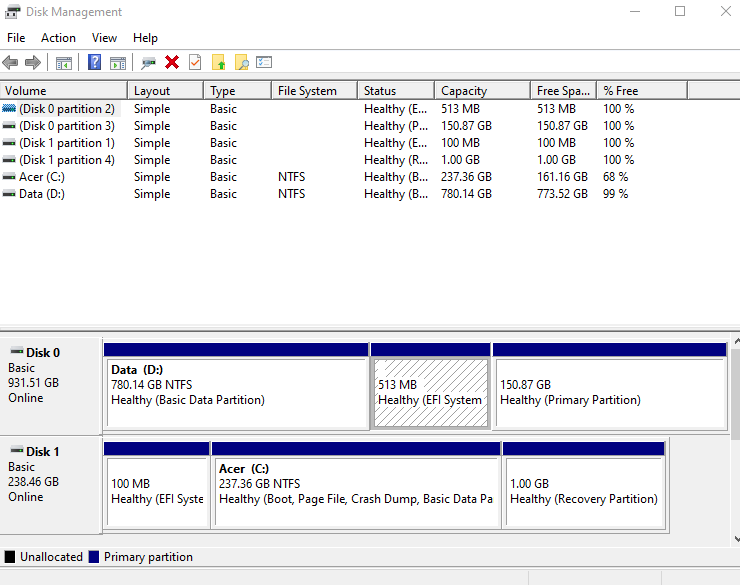 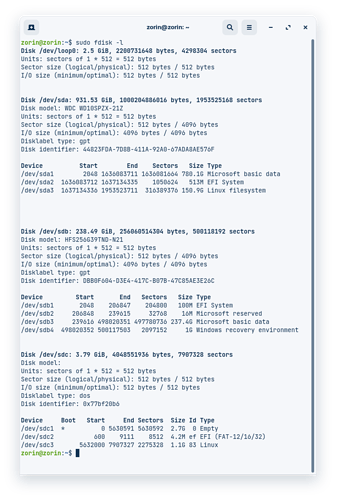 This was similarly discussed here:

Yes, you can run with persistence to achieve this. I recommend Ventoy highly for this. It allows a bit more freedom in Persistent Distro Use. This sounds like information that is stored in the EFI partition, to me. This may be trickier, since Zorin OS will show up as Ubuntu in this field. An option may be to simply re-install Zorin OS as normal after removing all Ubuntu entries. Boot LiveUSB, then open a terminal and run efibootmgr This will list all boot entries in the EFI partition. It s…

Can I ask a question? I don't know if it is related to the topic though... One time I tried to multiboot, Windows+Ubuntu(21.10)+Zorin Lite. I installed Windows first, the Ubuntu and then Zorin Lite. The problem was, after I created all the partitions and finished install Zorin Lite, I restarted but the GRUB never appeared. Instead it booted straight into Windows. I had to delete the Linux partitions (after creating a backup of the home partition) and cleared the EFI of the linux bootloaders …

Did you install Linux in the 1TB disk and Windows in the 256 GB disk?
Do you have a Windows bootable USB lying around? Why do you have 2 EFI partitions?

Why do you have 2 EFI partitions?

Yes, I would say one of those needs to go. Need to first figure out which Windows is using...
Who knows Windows really well around here?

I know how to identify using CMD.

Linux was installed in Disk 0/ the 1TB disk. I don't have a Windows bootable USB. As far as the two EFI partitions... it's sounding like that's the issue. I can only guess how two wound up there. Maybe the 'clean' install was not as clean as I thought? But nevertheless, it sounds like one needs to go.

I know how to identify using CMD.

What steps should I take in determining which EFI file gets to boot and which one gets the boot?

which EFI file gets to boot and which one gets the boot?

I can't tell you that but I can help you to identify which EFI has Windows and which one has Linux in it.
Following commands to be run using Command Prompt or Powershell (Admin privileges may be required):

Next you will need to select the Volume which is the EFI partition.
It is usually the FAT partition.

Next you will need to assign a letter to it if it didn't have one already.

If you see Microsoft here then Windows bootloader is located here. otherwise it is in the EFI parttiion of the other disk. You can check it using the same method by following the same steps but when you get to the "select disk" step, select the other one (the one which you hadn't selected earlier). And when you "assign letter", assign a letter different that what you assigned to the other EFI partition.

I was able to assign letters, but could not access them. (I also noticed that while the Disk Management program lists 3 volumes each for Disk 0 & Disk 1, the volumes for Disk 0 & 1 came up identical and only had 4 volumes [excluding CD drive] when listing them through the terminal. Is that normal?)
I may have found a workaround, though. Running Rescuezilla gave me this information about all the volumes and partitions

Comparing that with Windows, SDA is Disk 0 and SDB is Disk 1. Based on this information, is it safe to assume Windows is in Disk 1 and is using the SDB1/Disk 1 Partition 1 EFI file? 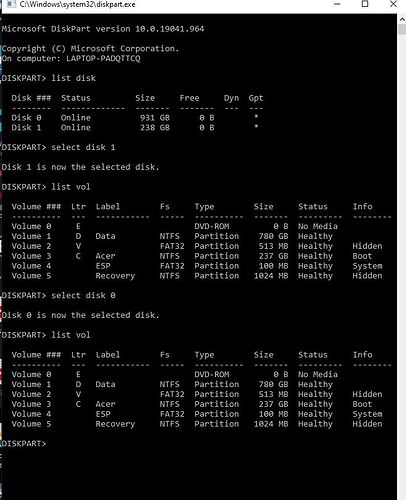 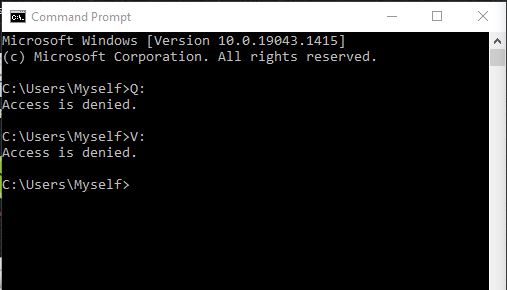 When I searched for a solution to the 'Access denied' error, I kept getting results that intimated changing access could only be done on an NTFS format, not a FAT32.

I was able to assign letters, but could not access them.

The command prompt should be opened using admin privileges.
And no, it is never safe to assume things (unless you are attending a test and there is no negative marking) but I think you are right...

I was able to successfully run through the commands this time! Partition 1 on Disk 1 has a boot order of Ubuntu then Windows while Partition 2 on Disk 0 only had Ubuntu. At this point, do I just need to remove Partition 2?

There are two ubuntu bootloaders, in two different disks? One of them needs to go. I don't know which one though...@Aravisian any idea how to know?

Which one is on the primary drive and which one is on the storage drive?
If there are two EFI partitions on one Drive then... well... oops...
If it was me, I would remove both, then create a new one, then reinstall the bootloader information for each OS.

However, having Two of them Can work, as long as the files are all intact. Troubleshooting it can be a pain, though, if something goes wrong. Which... I think you are experiencing now.

Yeah, at this point I'd place my money on the two EFI partitions being the source of the issue.

I assume drive 1 is the primary partition for Windows since that's where the C drive is. However, Zorin was loaded on drive 0. There is one EFI partition on each drive, and the one on 0 is ubuntu only. I would be hesitant to remove both & try to reinstall, both with my experience level being as it is and not having a back-up/installation medium for Windows. Doing a precursory internet search about remaking the Windows EFI all seem to require an external, bootable version of Windows as a prerequisite.

If the drive 0 EFI partition only has ubuntu listed, is there a reason not to just remove that one and see how the remaining drive 1 EFI works? If that doesn't fix things, is there a way around not having a Windows bootstick if the remaining partition needs to be remade or altered?

If the drive 0 EFI partition only has ubuntu listed, is there a reason not to just remove that one and see how the remaining drive 1 EFI works? If that doesn't fix things, is there a way around not having a Windows bootstick if the remaining partition needs to be remade or altered?

Are these Separate Physical Drives or separate partitions on one existing drive?

Is it not possible to keep the Windows EFI and remove both the Linux EFI and then recreate the linux EFI using a bootable zorin os usb?