Helvetica cannot be substituted for anything other than Arimo

I cannot substitute Helvetica with anything other than Arimo using Font Manager. Although it works with other fonts.

How was the Helvetica font installed in Zorin?

No, I don't have Helvetica installed and would like to substitute another font, but no matter how I try, it shows Arimo.

Sorry friend, would you like Helvetica font preferably? Or are you seeking a substitute?

Zorin has several grotesque sans-serif typefaces preinstalled, so I would like to choose one of them. However, I would avoid Arimo, as I find it difficult to read.

Is this alternative of any use?

The system is substituting Helvetica for Arimo so I would like to know how to change that.

I think I am now understanding the issue. If a document contains a font not installed on the system it automatically picks the first font in the system or the set default one. So no the behaviour cannot be changed.

Hmmm, it is strange that only Helvetica is fixed to Arimo while other fonts can be substituted by Font Manager.

I have astigmatism, so it is difficult for me to read Arimo because of the tight letter spacing.

Try one of my all time favourites, but don't know if it is weighted enough for you: 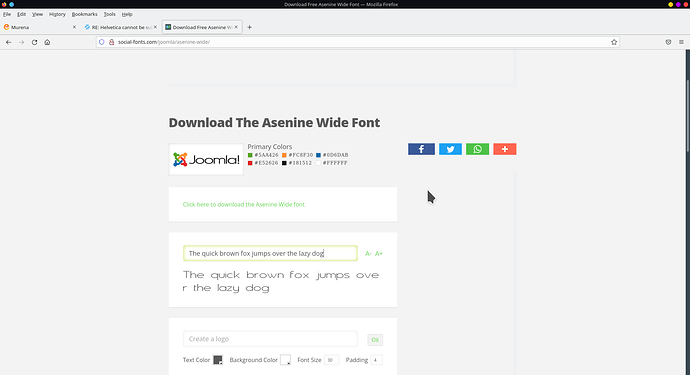 Found this article that may help you:

How To Set Default Fonts and Font Aliases on Linux

Font Woes It’s fairly straightforward to set the default font used in native apps on a modern Linux desktop, or the default fonts used to render web pages in your browser of choice. But if you’re reading this, you probably know that that’s far from...

I have discovered that Arimo is an Adobe Font - if you have anything Adobe on your system, this is why that issue could be happening, but not certain.

After some trial and error a while ago, I found a workaround: disabling Arimo in Font Manager worked.