How I can run app in the startup in the background?

I use ms edge browser, I want to make it run in the startup of zorin, but without interface just running in background and apear in tray taskbar. and I want to do that also with orage calendar app.

You could do that with Orage, prior to XFCE 4.14 as Orage included just a Panel Plugin. The XFCE panel is now gtk3, whereas the code for Orage panel plugin is gtk2. This has not yet been updated, though a new release of Orage (as we covered in another thread) includes a gtk3 panel indicator.

For the Browser, there is no real way of doing that. The browser will init as an Active Window. It is not a panel Plugin and will appear in the panel as a tasklist button.

You can add either to StartUp.
But both must open in their active windows.

I tried to append the command of run the app with & in the sessian and startup as is shown in that page , but it still show window of app in the startup.

Launch program on startup in background

I am sorry, @eid , I have already answered this and explained the "why" of it.

This may be possible, though not the way you think. You can attempt to add the app to the startup and for the command line arguments part add -- minimize. This may work, if the app is programmed to recognize this flag. I cannot promise that it will work, but it's an idea.

Another possibility is to use a script, launching it automatically with the app name/pid detailed here: How can I run a program on startup, minimized? - Ask Ubuntu.

for orage calendar , i found in the settings of it, what make that , so it is solved, I run it in the startup, and in its settings that r allowed to make it start hide, and make it start in tray, so it's perfect now. 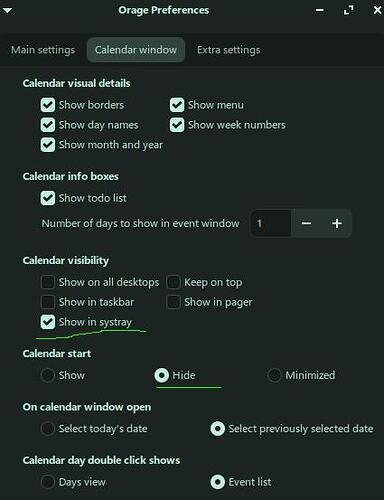 for browser it is so easy in windows to do that during the tabs of shortcut of app, but in linux it's diffuclt. the features of launchers or shortcuts settings r so poor in xfce.
I tried script, all depend on the idea of start app and minimize it or hide it.
like :

or
xdo hide -N firefox.
it's work good in terminal but when put them in script doesn't work, i don't have idea about script ,i hope the short script work, I don't like complex script ,so i don't like the long script in the previous link.

Starting an active window as Minimized can be done on Gnome and I am pretty sure it is as applicable on Cinnamon D.E. I do not know about KDE.
It's also pointless.

When you launch the app, just click minimize if you want it minimized.

For most applications, it is launched because the user wanted it opened. This is especially true for browsers.
In the case of Orage, I can see the reason for your desire more clearly. But for the browser, I think that it is fair to say your preference falls under "unusual."

EDIT: Devilspie may be able to help you achieve some of your goals:

find windows and perform actions on them

for orage app, it's very good to have it in startup and start hide, and can reach it in tray. so it is solved and working very good as I talked above. may be in the future updates in xfce it will be auto configure.

for ms-edge browser, i think it open in startup with hide window in tray by default in windows, that is very good because it is taking time to start it for first time , so when i need to open its window , it will start too faster.
I found solution for ms-edge to work like that: by append --no-startup-window to its command in session and startup:
/usr/bin/microsoft-edge-dev %U --no-startup-window
it's working very good until now.

I stand happily corrected. Thanks for sharing the solution.